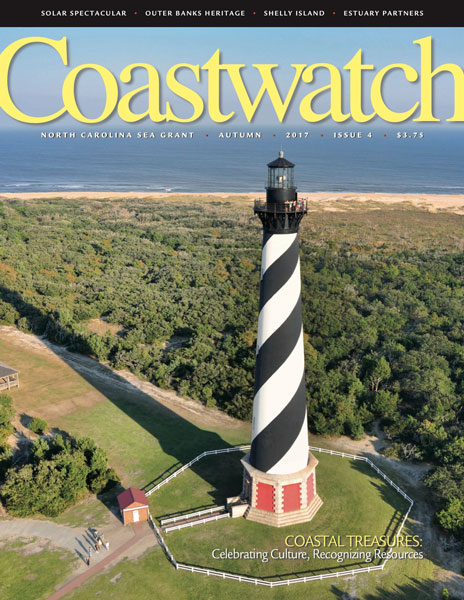 Seafood and commercial fishing, access to global markets through shipping and transport, tourism and recreation all supply thousands of jobs and billions in revenue for North Carolina. When economic activity is in balance with the long-term capacity of the coastal and ocean ecosystems, a blue economy emerges.

Cultivating the  Sea:
Is There a Profitable Market for Farm-Fresh Black Sea Bass?
in the Autumn 2022 issue
Thanks to breakthroughs from a team at UNCW, this seafood favorite could reach many more consumers.

Is There a Future for Oyster Relaying in North Carolina?
in the Autumn 2022 issue
For years, oyster farmers in our state have reported greater numbers of healthy oysters in areas that they harvest.

What’s So Special About North Carolina’s Oysters?
Savoring the NC Oyster Trail
in the Autumn 2022 issue
Farms, tastes, and tales — now foodies and adventurers can explore the magic of the North Carolina oyster.

Fishing for Food and Finding Connection
in the Spring 2022 issue
“Not everyone with a rod and reel is just fishing for fun. For some people, the stakes can be much higher.”

New Links in the Sea-to-Table Chain:
The North Carolina Local Food Council Responds in the Pandemic’s Darkest Hour
in the Fall 2021 issue
The loss of restaurant and other food service markets shook the commercial fishing industry to its core in the first half of 2020.

Blue Economy
in the Spring 2021 issue
Farmers and fishers have much in common in the way of obstacles and opportunities.

How to Freeze Your Fresh North Carolina Seafood
in the Summer 2020 issue
If you’re limiting your shopping trips right now, you can freeze your seafood to enjoy later.

Coastal Landscaping: The Next Blue Economy Sector?
in the Spring 2020 issue

The Greatest Show on the East Coast:
New Journeys into the Heart of North Carolina’s Darkness
in the Spring 2020 issue

Why Do Some Anglers Target Bluefin Tuna While Others Do Not?
in the Summer 2019 issue

A Fish for All Occasions:
A Quest for the Heart of the Local Seafood Lover
in the Autumn 2019 issue

From Sea to Table to You
in the Spring 2019 issue

Developing Recipes, Nourishing the Community
in the Winter 2017 issue

Spreading the Word about Southern Oysters
in the Spring 2017 issue

Cut the Corner:
Drawing Visitors to Northeastern North Carolina
in the Autumn 2015 issue

Behind the Scenes: An Aquarium Adventure
in the Winter 2014 issue

The Seafood Safety Squad:
Ensuring Quality of Coastal Delicacies
in the Spring 2014 issue

Taming the Trout: Burgers Go Fishing
in the Autumn 2014 issue

A Center for Growing Seafood, Testing Ideas
in the Winter 2013 issue

Hooks in the Gulf Stream:Captains and Scientists Reel in Data
in the Winter 2012 issue

Where to Next?
Uncovering Property Owners’ Perceptions
in the Winter 2012 issue

Take It Outside: Wet and Wild Coastal North Carolina
in the Summer 2012 issue

Science Working for the Economy
in the Holiday 2012 issue

In Search of a Better Way: Adjusting Shrimp Trawl Gear
in the Holiday 2012 issue

Start Your Appetites: Fall for Food, Fun and Festivities
in the Autumn 2011 issue

Winds of Change: Shrimpers Plan for the Future
in the Holiday 2011 issue

Dreams of Black Pearls
in the Spring 2010 issue

Seafood: Fresh and Local
in the Summer 2009 issue

Curbing the Import Appetite: Selling American Shrimp in the US Market
in the Winter 2007 issue

Going with the Flow: Aquaculture’s Water Quality Woes
in the Winter 2006 issue

Crowding Out Shellfish
in the Winter 2006 issue

Southern Flounder: A Hot Candidate for Aquaculture
in the Winter 2003 issue

The Vanishing Oyster: Stocks are Declining in North Carolina
in the Winter 2000 issue