Coyotes. In popular conscious­ness, they slink through sagebrush and sand under a desert sky, frighten ranchers’ cattle and howl at the Arizona moon. In truth, coyotes are just as likely to prowl under a North Carolina sky — and biologists with the federal red wolf re­establishment program are the ones who are howling.

Though red wolves and coyotes are different species, they are both canids, and all canids — wolves, foxes, dogs — can interbreed. In eastern North Carolina, where the endangered red wolves have established a tenuous wild population, the coyotes’ inroads could spell disaster. If coyotes and red wolves continue to mix, the red wolves could disappear once again, replaced by hybrids or coyote-wolf “mutts.”

This is not a new problem. In fact, interbreeding helped bring the red wolf to the brink of extinction in the first place. Until early this century, Canis rufus was common throughout the southeast. As the decades progressed, hunting, trapping and clearing land for agriculture forced dwindling red wolf populations into ever smaller areas.

By the 1960s, red wolves fought for survival on pockets of land in Texas and Louisiana, interbreeding with coyotes as their numbers rapidly declined. Alarmed officials from the U.S. Fish and Wildlife Service began trapping the wolves in the 1970s, afraid the species would vanish. Out of hundreds of animals, they found only 14 pure red wolves. These became the captive breeding stock for an experimental wolf re-establishment program. 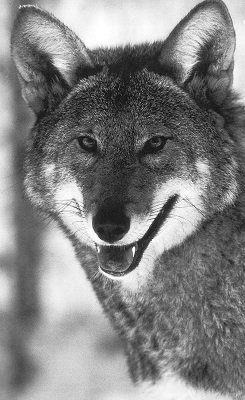 In 1987, the federal program released its first red wolves into Alligator River National Wildlife Refuge, a gift of almost 120,000 acres from the Nature Conservancy. Considered extinct in the wild, the zoo-bred wolves struggled to adapt to their new environment of woods, fields and swamp.

Over the next five years, the Fish and Wildlife Service released an additional 40 wolves onto the refuge. While some succumbed to vehicle accidents, deep water or illness, the Alligator River site lacked one important threat: coyotes.

“One of the many reasons Alligator River was chosen in the first place was because it was coyote free,” says Scott McLellan, biological technician with the red wolf program.

For several years, the red wolves flourished, relatively safe from other canids that could introduce new genes to the pool. “We’ve had a lot of biological successes,” says Jennifer Gilbreath, outreach coordinator and biologist with the red wolf program. After a few initial setbacks, the population began to grow on its own, producing new generations of wild-born wolves.

“They’ve been reproducing for 12 years now,” McLellan says. “They reproduce fine.” Today, more than 80 red wolves reside on one million acres in northeastern North Carolina, from the Pocosin Lakes and Alligator River refuges to Lake Mattamuskeet and surrounding private lands.

In the entire nation, there are about 170 in captivity and around 10 on islands, Gilbreath says — a strong comeback from 14 individuals only two decades ago. Yet as red wolves have rebounded in North Carolina, coyotes have moved into the area, once again threatening the species’ genetic purity. “Some people have illegally brought coyotes into these areas,” McLellan says. Others have simply migrated from western counties, where they have been common for years.

Coyotes are survivors, McLellan says. In the past century, they have spread through the country’s 48 contiguous states, including North Carolina. “They’re a very adaptable species. They can live in the desert, the mountains, the forest, the swamp. I guess you could say they’re smarter than wolves…. People have been trying to exterminate the coyote for 150 years, unsuccessfully, but look how relatively easily the red wolf was brought to the point of extinction.” 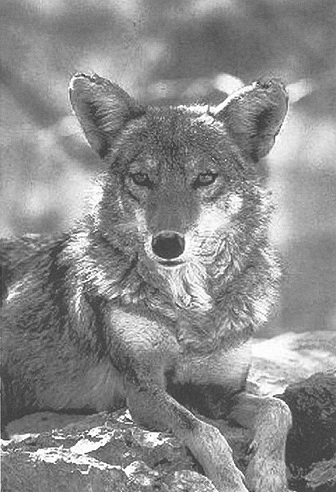 Coyotes are about half the size of red wolves. Photo courtesy of George Harrison/USFWS.

Fish and Wildlife Service biologists are now taking up the age-old battle against the coyote, but it’s difficult to wage war against a creature so close to the red wolf .in appearance. Though coyotes are smaller, about half the size of red wolves, they have similar markings. “If I were to see one over 150 yards away, I’d only be able to say, “That’s a small canid,”‘ McLellan says.

Up close, the two species do have recognizable differences. “A coyote generally has a smaller, narrower face, smaller ears and a smaller muzzle,” McLellan says. “Also, their feet are much smaller than a wolf’s.” Yet if the program placed a bounty on coyotes, concerned citizens would likely kill as many red wolves as their canid cousins.

For now, the Fish and Wildlife Service staff settle for trapping all the red wolves, coyotes and hybrids that they can, outfitting them with radio collars to track their movements. “We don’t know to what extent they are interbreeding,” McLellan says. “Right now we’re sterilizing non-wolves, putting collars on them and releasing them to their home ranges …. They serve as space holders until we can replace them with red wolves.”

Overall, the red wolf program has been a success, despite the threat of hybridization, McLellan and Gilbreath say. The wolves have reproduced well in the wild, and scientists and wildlife managers have gleaned vast amounts of information about what red wolves need to survive. Many partners have joined the Fish and Wildlife Service in supporting the project, including the NC State College of Veterinary Medicine, the N.C. Zoological Park, the N.C. Department of Transportation, the N.C. Wildlife Resources Commission and Duke University. The University of Idaho and Trent University in Canada assist the program with genetic research.

‘There has always been tremendous public interest in the program,” Gilbreath says. Last year, the Fish and Wildlife Service made her the program’s first outreach coordinator, in charge of working with the media and keeping the project’s Web site up-to-date.

The red wolves have drawn mixed reaction from the surrounding communities. But some who were at first skeptical have softened their stance. Initially, “the main issue was the safety of families, pets and livestock,” McLellan says. But the red wolves proved to be notoriously shy and retiring.

“You rarely see them, unless you’re out there at night.”

In fact the desire to make contact with the wolves is much stronger than any lingering fear. “We’ve been doing howlings for 12 years, and they’ve always been popular,” McLellan says.

At the howlings, staff members make a short presentation on the wolves’ history and biology and provide information on the re-establishment project. Then staff members lead the rapt audience through the woods until they are near some of the captive wolves — individuals “who didn’t do so well in the wild,” McLellan says. When the guests howl into the darkness, the wolves always howl back.

“It’s great to see the reactions of people,” McLellan says. “They get so excited … their mouths are gaping open, their jaws are on the ground. They always stay still for a few minutes, just listening.”

As for McLellan himself, the eerie, spine-tingling music of the wolves still amazes him every time. Like so many others in North Carolina, he hopes it will never be silenced.

For more information about the red wolf re-establishment program, or to get a schedule of upcoming wolf howlings, contact the Alligator River Wildlife Refuge at 252-473-1131 or https://www.fws.gov/refuge/alligator_river/.

This article was published in the Winter 2000 issue of Coastwatch.