Road to the White House 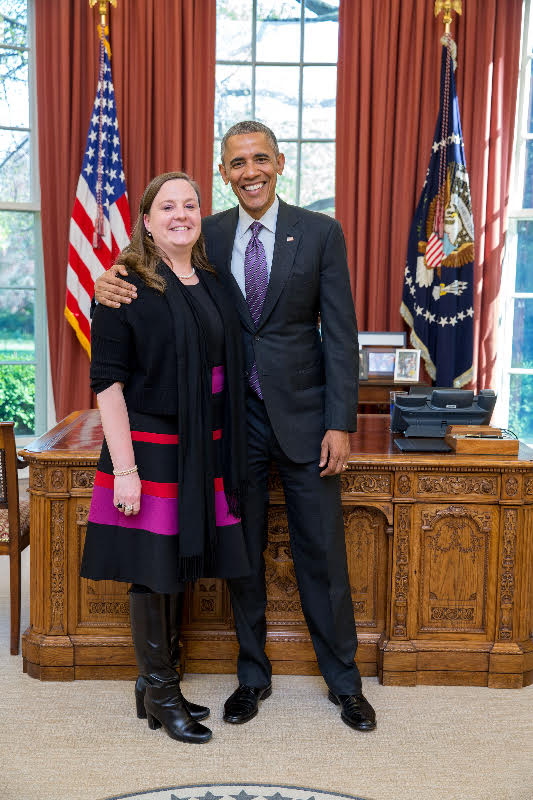 In her years as a special assistant to President Barack Obama, Jessica Maher focused on the big picture of the nation’s environment, as well as specific legislative language on myriad topics.

Her duties: serving as the primary White House liaison to about 20 Senate offices, the primary contact for four committees in the United States Senate, and as a point person on tracking updates for the Clean Air Act and the Clean Water Act.

Now a private consultant, Maher sees a consistent thread through her career — starting with experiences and opportunities in 2004. That year she worked for U.S. Rep. Sam Farr of California when she participated in the Knauss Marine Policy Fellowship, offered by the National Sea Grant College Program.

“My job in Sam Farr’s office gave me the launching pad for my career that ultimately led to the White House,” Maher says. “Finding positions on Capitol Hill is very competitive. I know Ph.D.s who want to work on The Hill and they are answering phones,” she explains.

Next, she handled energy, environment and conservation policy for two United States senators, Russell Feingold of Wisconsin and Bernie Sanders of Vermont. Immediately following the 2009 inauguration, she was named associate director for legislative affairs for the White House’s Council on Environmental Quality. In 2011, she moved to the special assistant role working with the president. “I was in the White House six years, which is a fairly long time by DC standards,” she notes.

Maher became a principal in the Smoot Tewes Group in Washington, D.C., in 2015.  While the group’s partners — Julianna Smoot and Paul Tewes — are known for their campaign organization and fundraising expertise, Maher focuses on issues. When she arrived there, she was ready for new challenges on familiar topics.

“Ninety-five percent of what I do involves energy, the environment, public lands and/or conservation work. That is the same portfolio that I have had in all my positions in D.C.,” she explains.

In some cases, she leads campaigns that may bring together national or regional groups involved in a specific topic. She helps other clients think through potential positions on an issue. In both roles, the practical experience she had as a Knauss fellow combined with her academic training in science and policy provide a foundation upon which she has built a career.

“That is why I wanted a Knauss Fellowship. The intersection of policy and politics is where decisions get made,” Maher says. Maher applied for the Knauss fellowship while completing a master’s degree in environmental management from Duke University. The U.S. Marine Corps Air Station at Cherry Point funded her graduate research to study how bottlenose dolphins use waters within bombing ranges in the Pamlico Sound. A native of Lawrence, Kansas, Maher also has a bachelor’s degree in biology from the University of North Carolina at Wilmington, where she earned a Senior Medallion Leadership Award.

The following interview has been condensed and edited.

What led you to your career choice?

When I was a freshman at the University of Kansas, I took a large lecture class. I think it was Introduction to Environmental Studies. We were assigned a paper and I decided that, after having read some timely news articles, I wanted to learn more about bioaccumulation of chemicals in marine mammals. So began a focus on marine mammals, or more specifically, a focus on considering the effects of certain human activities on marine mammals. That would carry me to the University of North Carolina at Wilmington — and four years of field research on the local bottlenose dolphin population — and eventually to Duke.

During my first year at Duke, I received a Doris Duke Conservation Fellowship that supported my interest in spending the following summer in Washington, D.C., learning firsthand about the policy process on Capitol Hill. I worked for the House Natural Resources Committee. From that experience, I knew that I loved the legislative side of policy. Thus, when I initially received news for my Knauss placement, I was pleased — and it obviously worked well.

Please share a highlight or an accomplishment from your time as a fellow. It was a great time to be on Capitol Hill to focus on ocean topics. The Pew Oceans Commission report came out in 2003. The U.S. Ocean Commission report came out in 2004, while I was a fellow. Congressman Farr, who cares so deeply about oceans issues, wanted to transform the recommendations of these reports into legislation, and that’s what I spent the bulk of my time doing. These efforts culminated in a bipartisan bill being introduced. And, I have to note, one of my proudest moments during my Knauss year was what happened after Congressman Farr introduced the bill: Both The Washington Post and The New York Times ran editorials supporting it.

I was so lucky in my fellowship placement, as I was able to work so closely with the recognized leader on oceans issues in Congress. I could speak on his behalf and people knew he was someone who cared deeply and was ready to get to work for change.

How do you apply the experience and skills you gained as a Knauss fellow to your overall career?

It is not one particular skill. Rather, it’s the combination of all of the skills I initially learned during my Knauss year. For example: How do you get along with people with whom you have nothing in common? How do you interact with folks you have never met before? How do you put together coalitions? How do you put together a successful and long-term strategy? These are examples of some of the skills that I first learned in my Knauss fellowship. I also learned to write brief, yet precise, background memos, a make-or-break skill in the policy realm.

Why would you recommend that others apply for this fellowship? Maher traveled to Greenland with a delegation of U.S. senators to see impacts of climate change. Photo courtesy Jessica Maher.

To begin with, I am nearly certain they will have the time of their lives! Beyond that, there are a lot of decisions that get made every day in executive branch agencies and on Capitol Hill, and knowledge is power. It’s really important for students to understand the policymaking process — not just what is in the books about how policy is made — so they can help be a part of crafting solutions.

It will benefit society as a whole if more scientists from schools in every state in the nation are speaking out regarding how the results of their research can be applied. Otherwise, it’s pretty likely that the same old lines will be maintained.

An example is the recent Toledo, Ohio, water-quality issues. I often see efforts to undermine the Clean Water Act, but when whole communities are faced with the unthinkable — no potable water — we’d all like to think that leaders will start to pay attention and make some connections. And, when local scientists can help explain, then I believe there’s a real chance for progress. So, yes, I am optimistic about the future as more and more scientists, in towns all across the country, talk about any number of environmental or public health or energy issues.

This article was published in the Holiday 2014 issue of Coastwatch, and updated in April 2016. See the other interviews from this issue here.

For contact information and reprint requests, visit ncseagrant.ncsu.edu/coastwatch/contact/. The shortlink for this article is http://go.ncsu.edu/h14maher.