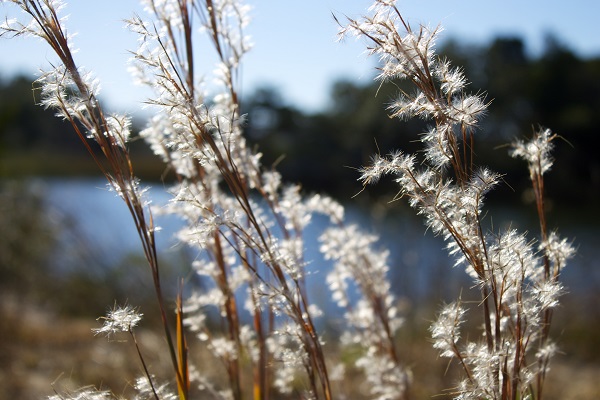 A North Carolina Sea Grant-funded study in the mid 2000s focused on habitat and bluestem, the main food source for caterpillars of the crystal skipper butterfly, “Atrytonopsis quinteri”. Photo by Emily Woodward.

Spy a new butterfly species on Bogue Banks in Carteret County. Enjoy adventures and meet the locals along the state’s inner banks.

The crystal skipper butterfly and the microentrepreneurs of People-First Tourism, Inc., await you at the coast this year.

Beyond the coastal connection, these two attractions have another thing in common: both received early funding from North Carolina Sea Grant.

The crystal skipper butterfly, which was officially recognized as a new species by The Lepidopterists’ Society in 2015, has been flitting around Coastwatch pages since a Spring 2007 article described a Sea Grant-funded study on its habitat.

Allison Leidner — then a doctoral student at North Carolina State University — conducted the work with her advisor Nick Haddad, who focuses on ecology and conservation biology.

Armed with a butterfly net, a pair of forceps and a marker, Leidner, now with the National Aeronautics and Space Administration, focused on how a habitat broken up by development affected population sizes and movements of the butterfly.

The brown flyer is only found in a 30-mile stretch from Radio Island in Carteret County to Hammocks Beach State Park in Onlsow County.

People-First Tourism connects microentrepreneurs to tourists seeking new adventures. The website lets travelers sign up for ecotours in North Carolina and around the world.

A story in the Autumn 2012 issue of Coastwatch described how Sea Grant funding enabled Duarte Morais, one of the network’s co-founders, to understand the challenges faced by prospective rural entrepreneurs in coastal North Carolina.

With these connections, Morais, an NC State faculty member who focuses on equitable and sustainable tourism, and colleagues expanded People-First’s network to include ecotourism opportunities in the less-traveled parts of the state.

The venture was incorporated in 2015. Its profits go to the People-First Innovation Fund that trains microentrepreneurs to build successful enterprises.

Interest in the butterfly and the travel marketplace endures. The following stories describe the latest developments for both projects, years after receiving Sea Grant funding.