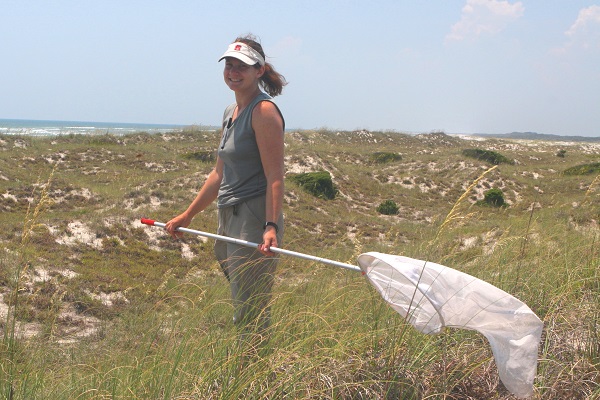 Brad Rich is a reporter for the Tideland News in Swansboro. A version of this story was published in the N.C. Coastal Federation’s Coastal Review Online. North Carolina Sea Grant provided early funding that enabled North Carolina State University researchers to determine how a fragmented habitat affected the butterfly’s population size and movement.

After years of research and debate, it’s official, or at least as official as these things can be: The world has a new species of butterfly. Its only certain and seemingly permanent home anywhere in the world is a 30-mile stretch of sand dunes — as the butterfly flies — from Radio Island near Beaufort in Carteret County, down Bogue Banks in Carteret to Bear Island in Hammocks Beach State Park in Onslow County. 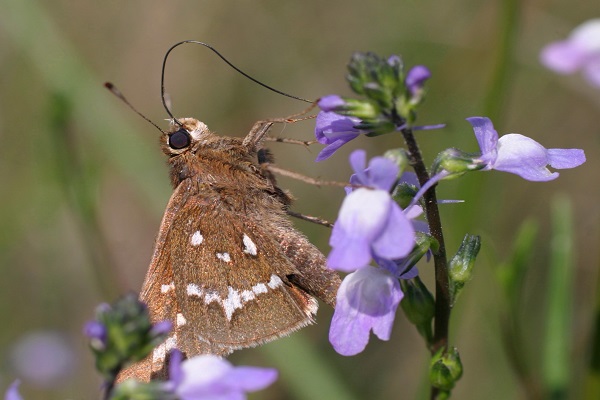 It’s not that the crystal skipper (Atrytonopsis quinteri) is truly new. Local naturalists and scientists have known about its existence for several decades. Sam Bland, coastal specialist for the N.C. Coastal Federation and former Hammocks Beach park superintendent, has been talking about the skipper for quite some time. He encourages people to plant bluestem, a grass that grows amid the dunes and provides the habitat and only known sustenance for the skipper caterpillar.

The crystal skipper was discovered, in fact, back in 1978 in Fort Macon State Park in Atlantic Beach by Eric Quinter of the American Museum of Natural History. Quinter passed his finding on to John M. Burns, a world-renowned research entomologist with the Smithsonian Institution, who quickly realized the insect was a rare, and possibly new, find. Eventually, the skippers also were spotted on Bear Island, although it’s not clear who found them there first.

In November 2015, almost 40 years after the skipper was discovered, Burns published a paper making the case for a separate species in the Journal of the Lepidopterists’ Society. He describes the crystal skipper as a full species, not just a subspecies within the skipper family.  Burns, who is retired, used morphological — studying the insect’s form and structure — and ecological analyses to determine that the butterfly was a full species.

Burns says there were several key findings that led to his conclusion. The caterpillar of the crystal skipper has a pattern on its head, whereas its nearest apparent “relative,” found on the mainland, does not, he explains. The caterpillars of the two species, Burns notes, also have striking color differences. Finally, despite their relative proximity to each other, the two species apparently have not bred, he says.

“In the field of taxonomy, all things are somewhat subjective. Things do change as more people do research, so decisions are not necessarily hard and fast. But from all the work I’ve done, I’ve concluded that, yes, it is a separate species,” he says.

Canary in a Coal Mine

Burns’ work was aided greatly by Allison Leidner’s research at Fort Macon. At the time, she was working toward her doctorate in biology at NC State University. She suggested naming the skipper after the Crystal Coast — the Carteret County Chamber of Commerce’s name for Bogue Banks. The spots on its brown wings look something like crystals, she notes.

The U.S. Fish and Wildlife Service considers the crystal skipper a “species of concern” but it isn’t listed under the U.S. Endangered Species Act. This skipper, in fact, is part of a gigantic family of butterflies, so named for their quick, darting flight. There are, according to some sources, more than 3,500 species of them worldwide.

The crystal skipper is thriving, in a sense. It’s just that it thrives only in a very small area. But at least it has a cool name.

“Butterflies don’t really have formal common names, like birds do,” Leidner says. “But this name just took off.”

Children, for example, love it, she says, and get excited when they learn it’s unique to our area, and right under our noses, sometimes swooping around beachfront backyards. 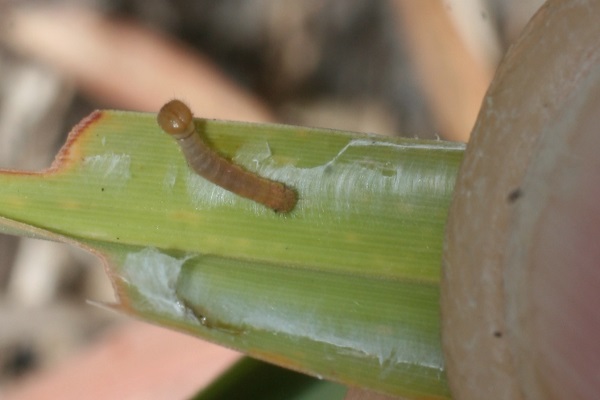 The crystal skipper caterpillar has a pattern on its head, distinguishing it from its nearest apparent mainland relative. Photo by Sam Bland.

Leidner is understandably proud, but careful to point out that she neither discovered the crystal skipper nor wrote the paper that identified it as a full species. “It’s very exciting,” she says. “It’s amazing to have played a part in it. It’s not something that happens very often. It’s really unusual to find a new species of any kind in the United States.”

Now working for the National Aeronautics and Space Administration, she has long focused on the ecology and conservation of rare and endangered species. And there’s no doubt that the crystal skipper is rare and that its existence, because of its limited range and its increasingly squeezed habitat, is tenuous.

As such, in a sense, it’s not just a butterfly, but something akin to a canary in a coal mine: As long as the crystal skipper is reproducing and flitting around the dunes in significant numbers, she says, one can be fairly sure that despite all the development and changes along its portion of the coast, at least some of the crucial dune habitat is healthy.

Leidner began her research on this little-known butterfly in 2004 to test questions she had about conservation strategies to reduce the consequences of habitat fragmentation. “After an initial field season the following spring, I was hooked,” she says.

Over the next five years, Leidner used field and genetic techniques to look at the effects of habitat fragmentation on the crystal skipper, with an eye toward identifying conservation strategies. Using a net and forceps, in a decidedly low-tech operation, she started collecting skippers for genetic analysis in the summer of 2006.

She collected in spring and summer to spread out the effects on the skipper population. The skipper’s lifespan as an adult butterfly is typically a matter of days, two weeks maximum. They almost surely number only in the thousands at any given time.

In addition, through catch-and-release and subsequent recapture, she learned that crystal skippers would sometimes leave their sand dunes and fly into parking lots, housing areas and forests. She even determined that they would move over a mile over a few days.

But they always came back to those dunes, where the bluestem grows. The plant, unlike the skipper, ranges along much of the East Coast, and thrives in the Crystal Coast region. It’s the dominant species behind the dunes, growing back through the shrubs to the maritime forest, at least where the forest still exists.

The crystal skipper has two broods a year. After emerging from the chrysalis stage in the spring, the adults mate and the females lay eggs in the bluestem. The eggs hatch into caterpillars, which feed, grow and then undergo pupation to form a chrysalis.

After metamorphosis, the second brood of adults emerges between mid- to late summer. The caterpillars from this brood grow until autumn, and then overwinter, and the following spring, the cycle begins anew.

Leidner now sees it as her mission, in part, to tell people the skipper’s story, and to help ensure the crystal skipper has a home. The skipper, she says, should be protected because it has intrinsic value. By protecting its habitat — the sand dunes — we’re also protecting the human development that lines Bogue Bank beaches, she notes.

“We need to protect that dune line,” she says, “and we need to do all we can to keep people and pets from traipsing around within them, doing things such as ‘sand surfing.’”

Folks who want to help the crystal skipper, Leidner adds, might consider planting bluestem, much as people and conservation groups have taken to planting milkweed, the critical habitat for the most celebrated of the butterflies: the monarch.

“Some of the crystal skippers are fairly sedentary,” she says, “but our research also showed that some fly around, even into people’s backyards. We need patches [of bluestem] so that the habitat won’t become even more fragmented than it has already become.”

In essence, stepping stones are needed, she says. 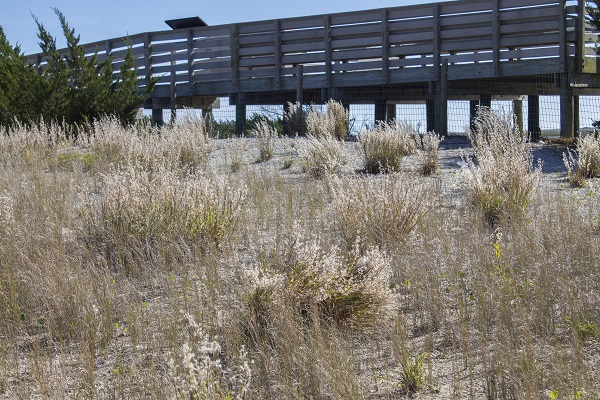 There have been formal efforts to do that. In 2009, Paula Gillikin, site manager for the Rachel Carson Reserve in Beaufort, started a program aimed at growing bluestem. The plant has grown naturally in an area known as Bulkhead Shoal, but that area is eroding rapidly, plus the treasured wild horses in the reserve were trampling on the plant and eating it, too. The idea of the program was to offset that habitat loss. In a pilot program in conjunction with the N.C. Aquarium at Pine Knoll Shores, bluestem was planted in a test area on Carrot Island. It grew, without fertilizer — a necessary precaution because of runoff concerns — but eventually the horses ate that, too.

In 2011, another “crop” was planted and fenced off. Again, it worked. And it did attract some crystal skippers, though it’s not certain if they are, or will be, a fixture there.

The project includes an interpretive sign, Gillikin says, and the goal is to inspire people to think, “Hey, if it worked there, maybe I could do it, too,” she says.

The reserve also plans to teach children about the crystal skipper during a summer camp for rising seventh- to 10th-graders this July, in conjunction with the N.C. Maritime Museum in Beaufort. (For more on this camp, see the Tiding on page 2.)

Participants will learn how to mark and recapture butterflies, and how to conduct population-dynamic studies. Best of all, Gillikin says, Leidner plans to come down from Washington, D.C., to teach, giving students the opportunity for contact with a high-level scientist.

All of this, Leidner says, is encouraging news for the ultimate survival of a tiny species that captured her heart years ago and remains important to her.

“People are excited about this,” she says of the butterfly. “They care.”

Burns says he is relatively confident that the crystal skipper can endure. This is, in large part, due to its stronghold in the state parks, especially Hammocks Beach, where Bear Island is accessible only by boat. His main worry would be if a major hurricane — a Katrina-type event — roared through the region and leveled the dune habitat for miles, through the range of the species.

“Other than that, as long as we have those state parks, which are of considerable size, I’d think they will last,” he says.