Critters (Other than Sharks)

From sea turtles to tree frogs to naked sea butterflies, we’ve published material on all kinds of critters. And there’s much more in our Sharks section, too.

Sea Science:
Climate Change and the Northern Migration
in the Summer 2022 issue
Warming waters mean that more animals — including sea turtles, manatees, and sharks — will be on the move.

Wings of Change
The Impacts of a Warming Climate on Birds of North Carolina
in the Spring 2022 issue
Extinction will threaten about two-thirds of America’s bird species if temperatures rise by 5.4 F before the turn of the century.

Podcasting a Wide Net
in the Winter 2021 issue
Student Journalists Offer Coastal Voices on Climate Change to a Worldwide Audience
“Our imaginations are broader than we think.”

Sea Science
How Do Humpback Whales Behave Around Busy Atlantic Seaports?
in the Winter 2021 issue
Research reveals what happens when humpback whales and boats of all sizes frequent the same high-traffic areas.

This Wet and Water-Loving Land
Excerpts from Bland Simpson’s North Carolina: Land of Water, Land of Sky
in the Fall 2021 issue
“…the ibises kept on flying in, some just above the water, some suddenly lifting above it to five and even ten feet…”

Invasion on the Mudflats
in the Fall 2021 issue
New research reveals the impact of the invasive seaweed Gracilaria on hard clams and other intertidal bottom-dwellers.

Hook, Line, & Science
Oyster Reefs, Self-Releasing Hooks, and the Mysterious Wanderings of Southern Flounder
in the Fall 2021 issue
Creating no-harvest zones on oyster reefs also helps the fish and crustaceans that live on the reefs.

Naturalist’s Notebook
Do Water Snakes Get Thirsty?
in the Fall 2021 issue
A research team enters swampy terrain to hand-capture snakes and measure the reptiles’ sensitivity to dehydration.

Above and Below
in the Summer 2021 issue
Two projects explore very different effects of weather on surface water and groundwater in coastal NC.

Skedaddling Sea Turtles
in the Summer 2021 issue
Not only do the turtles dive longer and change locations, but their new behaviors linger after the storms have passed.

Sea Science: Crabitat
in the Spring 2021 issue
Blue crabs go through drastic changes in body shape and location as they age.

Sparrows and Rising Seas
in the Winter 2020 issue
Two coastal study sites now support hundreds of saltmarsh and seaside sparrows but might only provide habitat for 25 by 2060.

More Than Sand Dollars
in the Autumn 2020 issue
Beachcombers prize the iconic skeletons, but these creatures were masters of their environment when they were alive.

Is Climate Change Affecting Sea Turtle Hatchlings?
in the Autumn 2020 issue
Research shows that warming temperatures cause loggerheads to give birth mostly to female offspring.

Blood Draw at the Horseshoe Corral
in the Autumn 2020 issue
An essential medical safety test used around the world depends on horseshoe crab blood, and scientists may have discovered the key to a sustainable supply.

In Search of Ancient Oysters
in the Summer 2020 issue
Can the fossil record suggest how to protect a modern-day species? 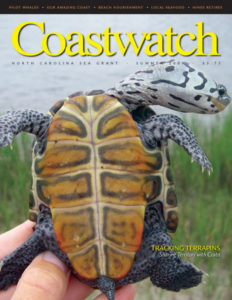 An Underwater Soundscape Is Worth a Thousand Words
in the Spring 2020 issue
What can we learn by eavesdropping on the underwater conversations of fish?

The Greatest Show on the East Coast
in the Spring 2020 issue
The Outer Albemarle Peninsula offers some of the darkest skies on the U.S. Atlantic seaboard and a nightscape full of wildlife.

You Say Starfish, I Say Sea Star
in the Winter 2019 issue

Returning to Shore
in the Summer 2018 issue 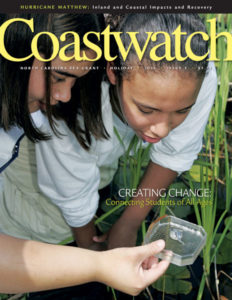 Leave It To Beaver (Dams)
in the Autumn 2017 issue

An Invasion of Naked Sea Butterflies
in the Autumn 2016 issue

Jellyfish in Bloom:
Are Humans Contributing to Local Populations? 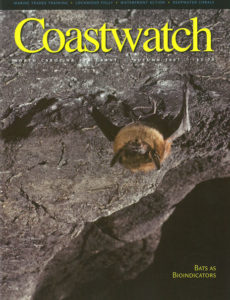 The Secret World of Red Wolves:
The Fight to Save North America’s Other Wolf
in the Winter 2014 issue

Protecting Beaches and Sea Turtles
in the Holiday 2014 issue

Dinosaurs in the Rivers?
in the Spring 2013 issue 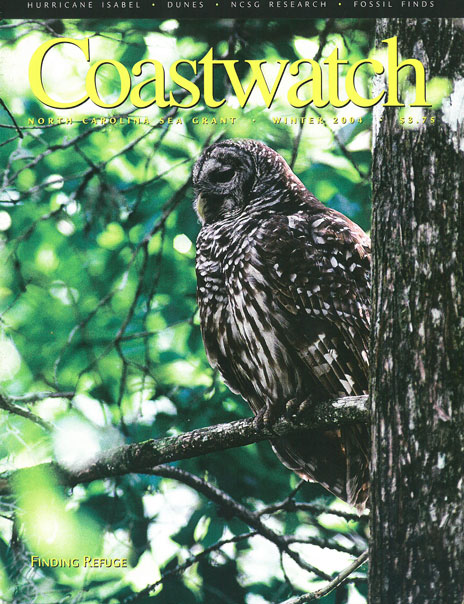 Hunting Lions
in the Autumn 2013 issue

Riding the Waves:
Identifying and Protecting Marine Mammals
in the Holiday 2013 issue

Silver Spawners:
Restoring Shad to the Cape Fear
in the Holiday 2013 issue 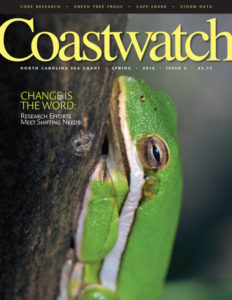 Hoping for a Comeback:
Researchers Eye River Herring
in the Spring 2012 issue

The Multitalented Oyster
in the Autumn 2012 issue

Dreams of Black Pearls
in the Spring 2010 issue

Return of the Red Wolf
in the Summer 2010 issue

Birding on the High Seas
in the Holiday 2010 issue

The Rise of the Jellies
in the Holiday 2010 issue

Right Whale Population — Up by One
in the Spring 2009 issue

Coastal Invasion: The Argentine Ant
in the Holiday 2009 issue

Lionfish: Where Are They Now?
in the Early Summer 2008 issue

The Bat Barometer
in the Autumn 2007 issue

Gastropod Grandeur
in the Holiday 2007 issue

Healthy as a Horse
in the Early Summer 2006 issue

Learning from the Past: Old Maps Help Build A New Future For The Eastern Oyster
in the Winter 2005 issue

Birds of a Feather
in the Spring 2005 issue

Seahorse Round-Up
in the Holiday 2005 issue

The Osprey: A Conservation Success Story
in the Early Summer 2004 issue

Exploring the Mysteries of Molting
in the Autumn 2004 issue

Diving for Lionfish
in the Holiday 2004 issue

Sea Turtles by Satellite
in the Winter 2003 issue

The Horseshoe Crab: Coastal Tank? Or Gentle Life-Bearer?
in the Autumn 2003 issue

Jellyfish: A Stinging Sensation
in the Autumn 2002 issue

Corals and Sea Urchins: Two Parts of the Same Story
in the Early Summer 2001 issue

The Enigmatic Eel: A Long Way From Home
in the Early Summer 2001 issue

Black Bears, Shy Giants of the Pocosin
in the Winter 2000 issue

Hope for Migratory Sea Birds
in the Holiday 2000 issue