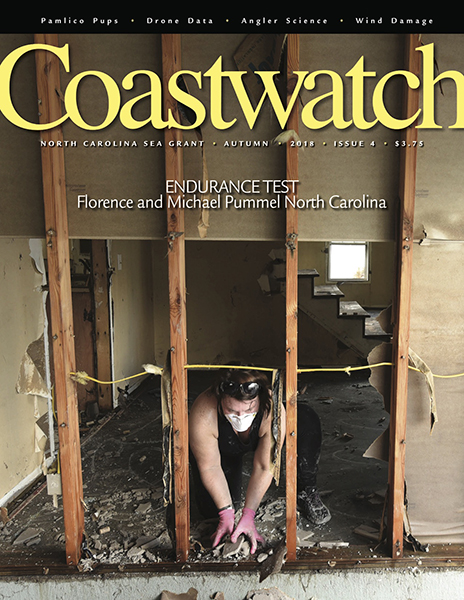 From the Executive Director
After the Storms: Lessons in Recovery and Resilience

The N.C. Sea Grant team will lead and collaborate with key partners in timely responses to post-Florence needs for research, extension and outreach.

We want to hear from you!

A photo retrospective curated by Julie Leibach reflects on the devastating impact that Hurricane Florence had on coastal and inland communities in North Carolina.

Hurricane Florence was the wettest tropical system on record in the Carolinas, with heavy rains that caused widespread flooding.

As homeowners repair damage related to Florence and Michael, they should take note of insurance incentives when considering construction options to increase wind resistance.

Chuck Weirich is part of the team that had developed the new North Carolina Shellfish Initiative, but less than six weeks later, participants also took on disaster recovery.

SEA SCIENCE
Welcome to the Neighborhood

Once occasional visitors to N.C. estuaries, bull sharks have now established a nursery in Pamlico Sound. Chuck Bangley investigates what brought them here.

PEOPLE AND PLACES
Into the Vortex with Frank Lopez

We’re in a metal boat in the middle of a lightning storm on a bay,” Frank Lopez says. “And then there was the waterspout.”

John Fear and Holly White received honors this fall for their leadership on climate change adaptation.

Jane Harrison moderated a trans-Atlantic discussion about fishing and seafood.