Visitors to North Carolina’s coast snap photos of blue herons or white ibises as they stand in grassy marsh pond shallows. Families join nighttime vigils to watch loggerhead sea turtles hatch in the soft dunes and toddle across the sand to the ocean. Others take daytime cruises along inlets to look for the swell of a dolphin fin.

The sounds and surf of North Carolina are endowed with wildlife. But what supports the rich biodiversity of North Carolina’s coastal plain is the flora. Mere inches in elevation change bring a host of different species and habitats — and a beautiful backdrop. 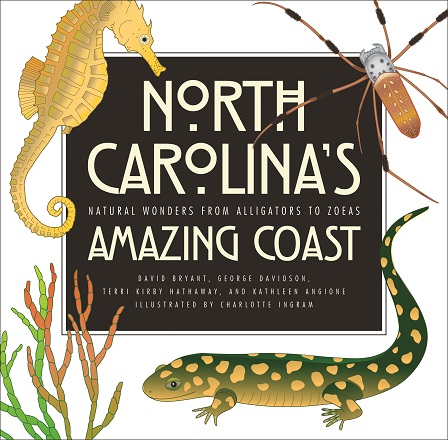 Information from this article was gathered from North Carolina’s Amazing Coast: Natural Wonders from Alligators to Zoeas by David Bryant, George Davidson, Terri Kirby Hathaway and Kathleen Angione. The book is a partnership among North Carolina and Georgia Sea Grant programs and UGA Press. To order the book online, click on the cover photo.

As you head to the ocean this summer, notice the flowers, shrubs and plants that characterize some of the state’s most naturally beautiful areas. Here’s a sampling of species included in North Carolina’s Amazing Coast.

For centuries, Native Americans throughout the Southeast roasted and boiled the leaves of the yaupon holly to make a native drink, or “Black Tea.” Its Latin name, Ilex vomitoria, is derived from its use in Native American purification rituals where copious amounts of the hot beverage were quickly consumed to induce vomiting.

Now cultivated as an ornamental shrub, the yaupon holly has the distinction of being the only North American holly that contains caffeine. A cousin of the South American yerba maté, its leaves can be brewed to produce a tea similar in flavor and quality — and, like coffee and other teas, high in caffeine and rich in antioxidants.

The evergreen shrub is native to North Carolina’s coastal plain. It prefers the sandy soils of maritime forests and high marshes, but also can be found mingled in the forests and swamps upland. It follows the delicacy of the seasons, decorating the spring landscape with dainty white flowers dotting its waxy, dark-green foliage. By fall, it’s laden in clusters of shiny, red-orange berries that persist through winter, splashing vibrant, crimson color on the bleached winter landscape.

The yaupon may be America’s forgotten tea plant, but growing among the yaupon is an overlooked fruit.

Pawpaw, Asimina triloba, is the closest thing to a tropical fruit growing in North Carolina. Several varieties once grew along streams, creeks and rivers in the fertile bottomland forests of the coastal plain. Taller trees provided vital shade for this short understory tree, but since the early 1900s, land clearing has limited the spread of this once commonplace plant.

The largest edible fruit native to North America, pawpaw grows in clusters, ripens in late summer, and tastes like a creamy mixture of banana, mango and pineapple. And, like other sweet fruits, it’s delicious to bake with, though it likely won’t be found in your local supermarket.

In fact, its natural distribution stretches across the state — yet the fruit often is not recognized by many who live here. However, within the past decade, pawpaw orchards and patches have popped up, supplying local patrons, farmers’ markets and an annual state festival with varieties of the exotic fruit.

America has yet to lay claim to its own health-boosting superfruit, but some food scientists have placed their bets on the pawpaw. Its high vitamin, mineral and protein content has caught the attention of scientists, who are studying new techniques for organic fruit production.

Look for the pawpaw’s debut at farmers’ markets seasonally, nurseries or even brewed in craft beers.

Along the outer coastal plain, on the mainland side of the barrier islands and sounds, tidal rivers are bordered by brackish marshes where fresh and salt water mix. The influence of fresh water gives these ecosystems greater diversity than saltwater marshes, but the vegetation characterizing brackish marshes is similar to that of their saltwater relative.

Its stems — leaves coiled so tightly they appear rod-like — are coarse, with sharply pointed tips and can grow up to 5 feet, covering large areas with dense stands. These durable “needles” were once used by colonial settlers for sewing, as denoted by its common name.

Often used to help restore estuaries, areas of rush protect shorelines, filter suspended solids and absorb nutrients. Marshes dominated by this grass-like perennial are used by more than 60 bird species, while other waterfowl use its seeds and foliage for food and shelter.

Starting in spring, small clusters of brown flowers bloom near the top of the stems. Tiny dark seeds borne in May provide fruit for birds, muskrats and marsh rabbits through October.

Farther downstream, where tides flood the banks with salt water before drifting back out to sea leaving expanses of black, muddy flats, matted colonies of glasswort, Salicornia spp., thrive in the salty marsh.

The low-growing stems are smooth and tubular, creeping from the joints of their branches. In early summer, the herb appears light green, but by fall it colors to crimson, popping out against a backdrop of green marsh grasses.

Fiddler crabs take refuge among its fleshy net, and snails cling to its stems, feasting on the algae that collects from the tides.

Full of briny juice, the tender shoots can be snapped off and eaten raw, or added to salads for a salty crunch. The plant also was used in the earliest methods of making glass, from which its name originates. Before scientists learned to produce sodium carbonate, the plant was burned to create soda ash containing this crucial component of early glassmaking. Soap makers also made use of the ashes, adding soda to their products.

Behind the shore, dunes rise and fall to swales covered in beach grass. Several species of morning glory, Ipomoea spp., can be found on the coast, twisting color into the sandy hillocks or sprinkling grassy areas.

Morning glories greet each warm morning by opening at the first hint of sunlight, and closing toward afternoon. Delicate tendrils strung with trumpet-shaped flowers grow among dark, heart-shaped leaves, blooming in shades of purple, pink, yellow, white and blue-green. Butterflies and hummingbirds flutter around the blooms in early morning.

Several other species can be found throughout the state, growing in wetlands, parks and gardens, wrapping along fence posts, trellises and branches, adorning the landscape with colorful, twisting vines.

The bright, fiery blanket flower, Gaillardia pulchella, thrives in North Carolina’s sandy, coastal soils. It often can be seen on a walk to the beach, growing in the soft sand.

It has a reputation for vigor. Its petals often become tattered as it withstands hours of unrelenting sunlight and warm, uninterrupted coastal winds.

Hatteras Island and Ocracoke residents tell a local legend about a broken heart related to the flower. Joe Bell, a grieving lover, wandered the island carrying the flowers. When found dead on his boat, surrounded by blanket flowers, the bloom became known as the Joe Bell.

Others may know it as the fire-wheel. The typical blanket flower bleeds from an orangey-red center outward to a bright band of yellow encircling the tips.

These humble blooms adorn roadsides, ditches and the straggly grasses of sand dunes, “blanketing” the landscape with a melding of red, orange and yellow.

Sea oats, Uniola paniculata, is often the most recognized plant of the coast. It grows in tall, grassy patches along the beachfront, scattering the dunes with green and golden arrangements. The long, thin leaves reach heights of 6 feet. The grass produces large seed heads that, by late summer, ripen to the color of straw, resembling oats grown for food and giving the plant its common name.

This perennial grass is called the “pioneer plant” for its ability to create and stabilize sand dunes. It tolerates salt spray and prefers having its base buried by the loose blowing sand, which stimulates growth and helps new shoots tack down at the stem node.

As sand gradually accumulates to eventually cover the entire plant, hardy new shoots emerge through the mound, and the process repeats itself until a hillock forms.

Its massive root system also holds soil and sand in place during extreme weather, putting it at the forefront of shoreline stabilization and making it a valuable dune protector. For more about dune species and protection, read Sea Grant’s The Dune Book.

Hathaway reminds the readers of Amazing Coast that these plants have to be tough, to withstand the coastal habitat. “While enjoying the flora of the coastal plain, consider the harsh environmental conditions,” she says.

Salt spray, sustained winds, unrelenting sun and heavy foot traffic from visitors are all part of the territory where these hardy species thrive.

Information in this article was gathered from North Carolina’s Amazing Coast: Natural Wonders from Alligators to Zoeas by David Bryant, George Davidson, Terri Kirby Hathaway and Kathleen Angione. Other resources include the N.C. Wildlife Resources Commission and the U.S. Department of Agriculture’s Natural Resources Conservation Service.

This article was published in the Summer 2016 issue of Coastwatch.