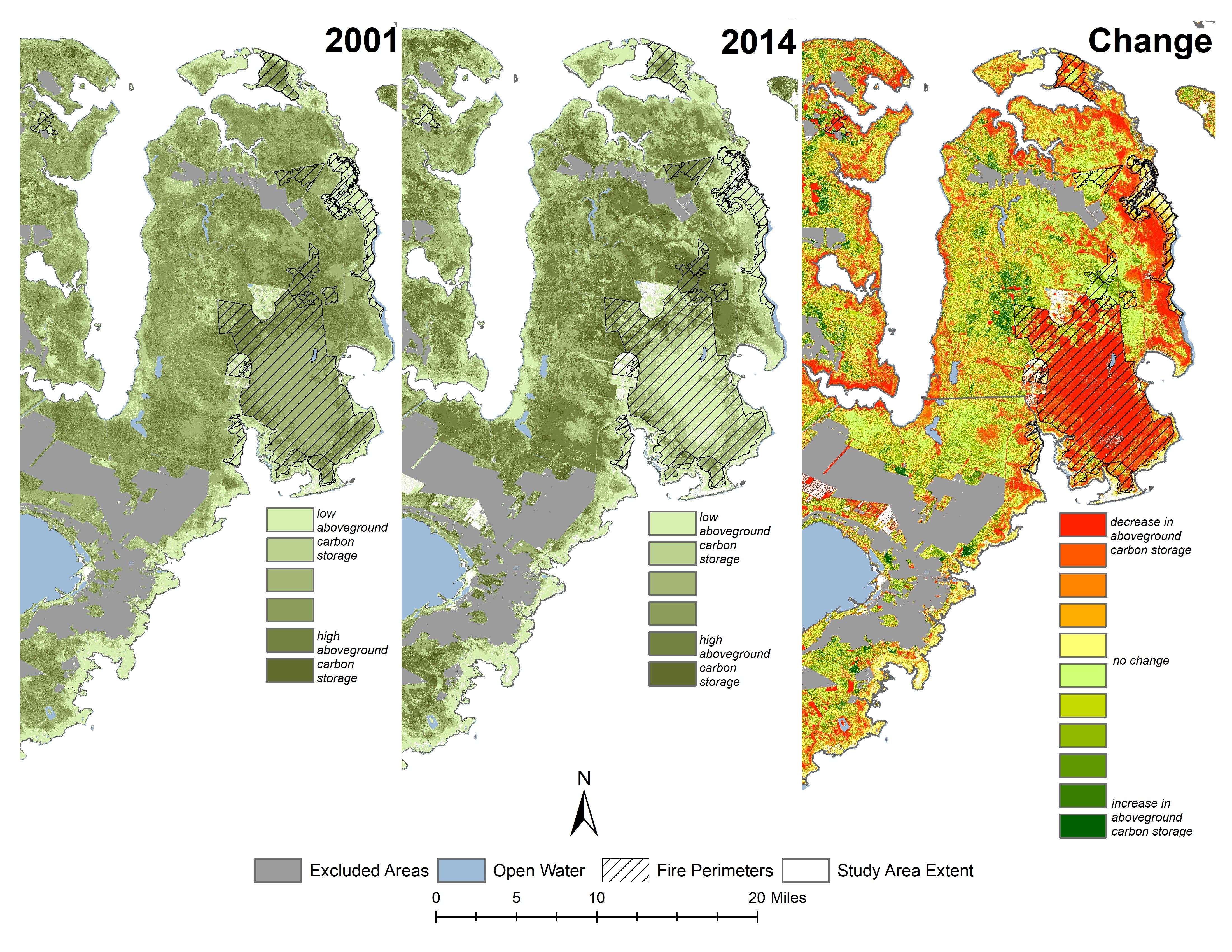 You’ve heard of haunted houses — but what about ghost forests?

Far from being frighteningly fun, ghost forests are a growing concern along much of the East Coast. In North Carolina, they are increasingly common along the Albemarle-Pamlico Peninsula in the rural eastern part of the state.

Bare, pale trunks line areas where once-healthy coastal forests thrived, a stark visual indicator of sea-level rise. These coastal forests just can’t keep pace with the encroaching saltwater that is creeping farther inland into the soil and surface waters of the coastal plain.

This combination of saltwater intrusion and forest retreat is transforming freshwater landscapes long before rising seas permanently inundate the land. Coastal systems are inherently dynamic and sea levels have been rising since the end of the last ice age many thousands of years ago.

But the current rate at which these changes are taking place has many scientists taking note.

How much of that landscape has changed over the past decade? What is the spatial extent of this change? Where on the peninsula is this change occurring the fastest?

With funding from North Carolina’s Sea Grant and Space Grant programs and the help of Paul J. Taillie, a doctoral candidate and wildlife biologist at NC State University, I decided to address these questions.

I am a member of an interdisciplinary team from NC State’s College of Natural Resources that is tackling a number of issues related to saltwater intrusion and its impacts. We refer to ourselves as the SALT team, for Salinization: Adaptive Capacity Building for Land-use and Tourism Development, found at ncsu-salt. weebly.com.

Our applied research seeks solutions to critical land and water issues. A main goal of the project is to outline potential solutions that local communities may adopt to cope with problems associated with saltwater intrusion. My research is looking to better understand mutually beneficial ways that humans and wildlife can adapt to these changing coastal landscapes.

Sea-level rise is among many stressors on forests worldwide — ecosystems already threatened by land clearing, fires, disease and invasive species. Overall, these combined changes are diminishing the ability of plants to fight climate change.

Plants are well known for their role in absorbing carbon dioxide. Scientists call this process carbon storage or carbon sequestration. This important ecosystem service means that plants are providing clean air for humans and wildlife.

Sea-level rise threatens the very ability of forests to provide all of these important benefits to wildlife and humans. The reduction in carbon sequestration due to sea-level rise can exacerbate climate change and its negative impacts.

Forest retreat also fragments — and at times even eliminates — important habitat for some wildlife species. It limits the ability of coastal forests to serve as buffers from storms and storm surge. With the loss of these forests, interior areas can be exposed during large storm events that were previously protected.

I have used satellite imagery and LiDAR (Light Detection and Ranging) data, and combined these with highly accurate field data to map the changes across the landscape. Satellite imagery data create near-seamless pictures of Earth’s surface and help us visualize and measure vegetation health or decline through images of land coverage.

LiDAR data, usually collected via airplane, provide three-dimensional information on the vertical structures of the Earth’s surface. This information helps scientists understand the structure, height and volume of features on the landscape.

The resulting maps tell a compelling story of an extremely dynamic and complex environment with mixed patterns of vegetation growth and decline. The patterns of change on the landscape indicate a very diverse land-use history, evidence of past fires and the effects of sea-level rise.

Areas of vegetation decline were evident close to the sounds. Large decreases in vegetation near the shoreline suggest that once-healthy forests have retreated, likely as a result of rising sea level. These findings have important implications for the region’s ability to store carbon.

These results are the first step in understanding potential vegetation dynamics caused by many drivers. Understanding specific mechanisms for the changes in vegetation will be a critical next step in showing empirically what has been talked about anecdotally for quite some time.

Linking these changes in forests directly to sea-level rise and increased salinity are essential for thinking about and planning for future change.

When planning for future change, it’s important to remember that people’s land-use activities and their responses to sea-level rise can either act to mitigate or exacerbate the impacts of sea-level rise on the landscape. That is why it’s important to understand what those living and working in this region are going to do in response to these increasingly salient coastal threats.

To capture landowners’ thoughts on different climate adaptation strategies, I’ve also conducted a social survey on the Albemarle- Pamlico Peninsula as part of my dissertation research. Ultimately, the goal is to combine the social survey data with these land-change maps and use them as decision-support tools to guide adaptive land-use policy and climate change adaptation strategies.

Lindsey Smart is a doctoral candidate in the Center for Geospatial Analytics within the College of Natural Resources at NC State University. She received a North Carolina Sea Grant/Space Grant fellowship. She previously worked for the Albemarle-Pamlico National Estuary Partnership.

Read about the recent partnership between North Carolina Sea Grant and Space Grant, and the other featured project concerning oyster reef restoration.