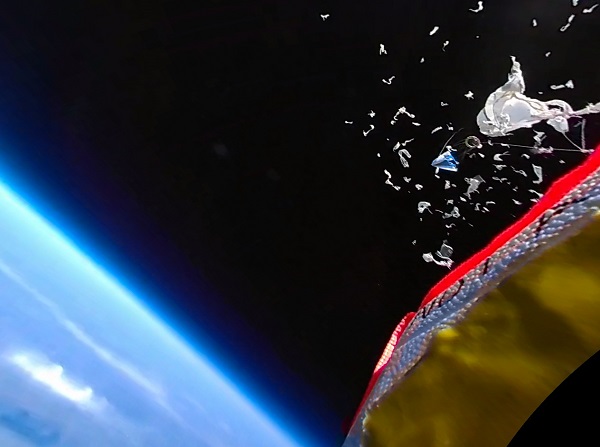 This spring, six North Carolina teams took their scientific expertise out of this world.

They participated in the third annual Community College High-Altitude Ballooning Team Challenge and Competition. The event, sponsored by the National Aeronautics and Space Administration and North Carolina Space Grant, was held in early April in Hickory.

Students worked for months designing and equipping high-altitude balloons with payloads — objects accompanying the balloon. All teams included a camera, and scientific equipment to calculate temperature, altitude and barometric pressure. A secondary payload was decided by each team.

Jilianne Leary, a high-school student taking classes at ECC, reached out to Matthew Gibson from the University of Warwick in Coventry, England. Gibson’s research includes the development of antifreeze protein polymers, which he generously shared with the team.

“I was really proud to make a contribution to an enthusiastic set of students working on this great program to get high-school students involved in real science. I hope it inspires more to take part in the future,” Gibson shares. The collaboration proved fruitful as the proteins with the polymer survived the flight.

Even with one errant payload going missing for a few weeks, the competition provided useful experiences for all involved, with several teams taking home honors.

To find out more about N.C. Space Grant, visit www.ncspacegrant.org. For photos and videos of this event, check out Facebook at NCSpaceGrant.