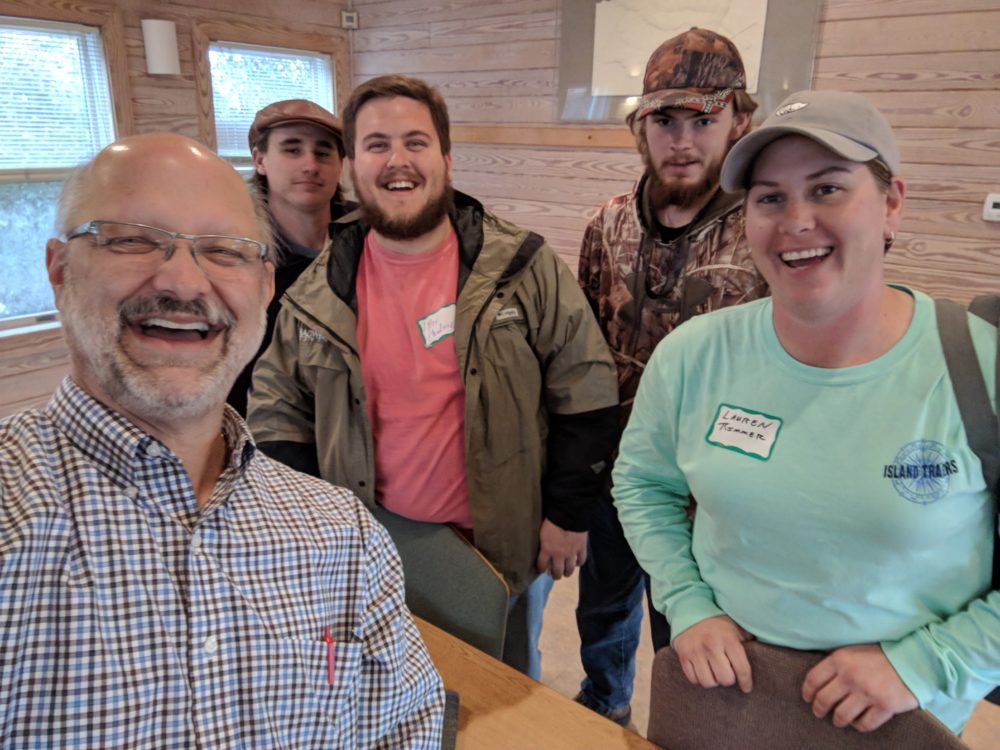 “You are invited to ‘Fish Camp,’ a small, two-day, regional gathering of commercial fishermen in their 20s, 30s, and 40s who can learn peer-to-peer, and together chart a course for North Carolina’s fishing future.”

With that simple invitation, North Carolina Sea Grant launched an inaugural series of networking and skill-building workshops for a rising generation of men and women involved in commercial fishing.

Fish Camp is part of the Next Generation Coastal Communities project, a Sea Grant-funded research effort to assess the extent to which North Carolina fishing communities are experiencing changes in the work force and in leadership. I serve as the project’s leadership development collaborator.

One of Fish Camp’s goals has been to engage participants in conversations about why fishermen and fishing matter, to share visions for the future of their industry, and to discuss how they could shape their values and principles into messages that the public and policymakers understand and respect.

“We wanted to make these fun,” says project co-investigator Barbara Garrity-Blake, a cultural anthropologist at Duke University. “So, we decided to call the workshop series ‘Fish Camp.’ Who doesn’t want to go to camp, right? We had a mandate of no lectures or PowerPoint presentations.”

In January, our project team held a series of small, leadership-development gatherings at locations in the northern, central and southern coastal regions. We invited younger people who had shown promise as fishing community leaders, based on our project research.

In total, 25 participants from 18 coastal communities attended. Group and one-on-one discussion topics ranged from how to manage a modern commercial fishing business to fisheries science and policy.

To that end, attendees heard from professionals across a spectrum of seafood interests who shared strategies that work, and ones that don’t, at the policymaking table.

These mentors also discussed collaborations with scientists as opportunities to integrate the unique knowledge, experience and skills of commercial fishermen. They encouraged Fish Camp attendees to play a part in research design, data collection and information-sharing.

The sessions provided communications training as well. North Carolina Sea Grant partnered with UNC-TV to put fishermen in front of a video camera, where they practiced fielding questions from a reporter unfamiliar with the industry.

“Certainly, to shape a sustainable future, the fishing industry needs rising leaders knowledgeable on the issues,” notes Fish Camp mentor Dave Beresoff, a commercial fisherman and former member of both the N.C. Marine Fisheries and Coastal Resources commissions. “But knowing how to build effective working relationships — within and outside industry — is equally important,” he says.

As a final camp exercise, our project team challenged participants to put into practice their newly acquired skills and develop “action plans” — that is, a few steps or changes that they could take to benefit their community or fishery.

One, for example, hopes to create a commercial fishing exhibit, where fishermen would talk about their profession and gear, for the Wild Caught Local Seafood and Music Festival this summer in the Gloucester community in Carteret County.

In March, we invited Fish Camp participants to regional follow-ups. Fourteen returned for these one-day sessions to learn more about state fisheries management and small business finance. We also checked in on the status of their action plans. Our project team will continue to monitor and support the individual participants as needed.

Fish Camp is rooted in the concept that a vibrant commercial fishing industry relies on visionary leadership from within coastal communities, along with thoughtful policy discussions and public support. As our project team has found, adaptation and innovation at the grassroots level also are key to rejuvenating the fleet.

From the initial sessions and follow-ups, Fish Camp participants agreed that networking with industry professionals and fishing peers was one of the more effective learning tools.

“I’ve got a few ideas that could better this industry,” one remarked. “Just glad there’s people out there to help the young guns.”

For more on the Next Generation Coastal Communities project, read “Charting the Course,” by Susan West.