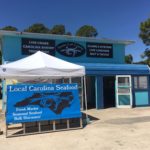 On Your Next Market Run, Don’t Forget NC Seafood

If you want to add fresh seafood to your mix of food staples, there are plenty of local sources.

A group of 11th and 12th graders decided to conduct a study called “Student Perspectives on Coastal Change.”

A small museum has earned a big distinction: The North Carolina Maritime Museum at Southport is the state’s first Certified Autism Center. Public operations have been suspended at the museum to help limit the spread of COVID-19.

The Southeast Climate Adaptation Science Center’s Fourth National Climate Assessment Webinar Series will explore the impact of climate change on tribes and indigenous peoples. The session will be March 25 at noon.