Erin Voigt is a Ph.D. candidate at North Carolina State University studying juvenile blue crab habitat use. She initially became interested in marine biology and coastal studies while at St. Mary’s College of Maryland, which is located on a tributary of the Chesapeake Bay. She is a Global Change Fellow with the Southeast Climate Adaptation Science Center and a joint fellow with North Carolina Sea Grant and the Albemarle Pamlico National Estuarine Partnership. 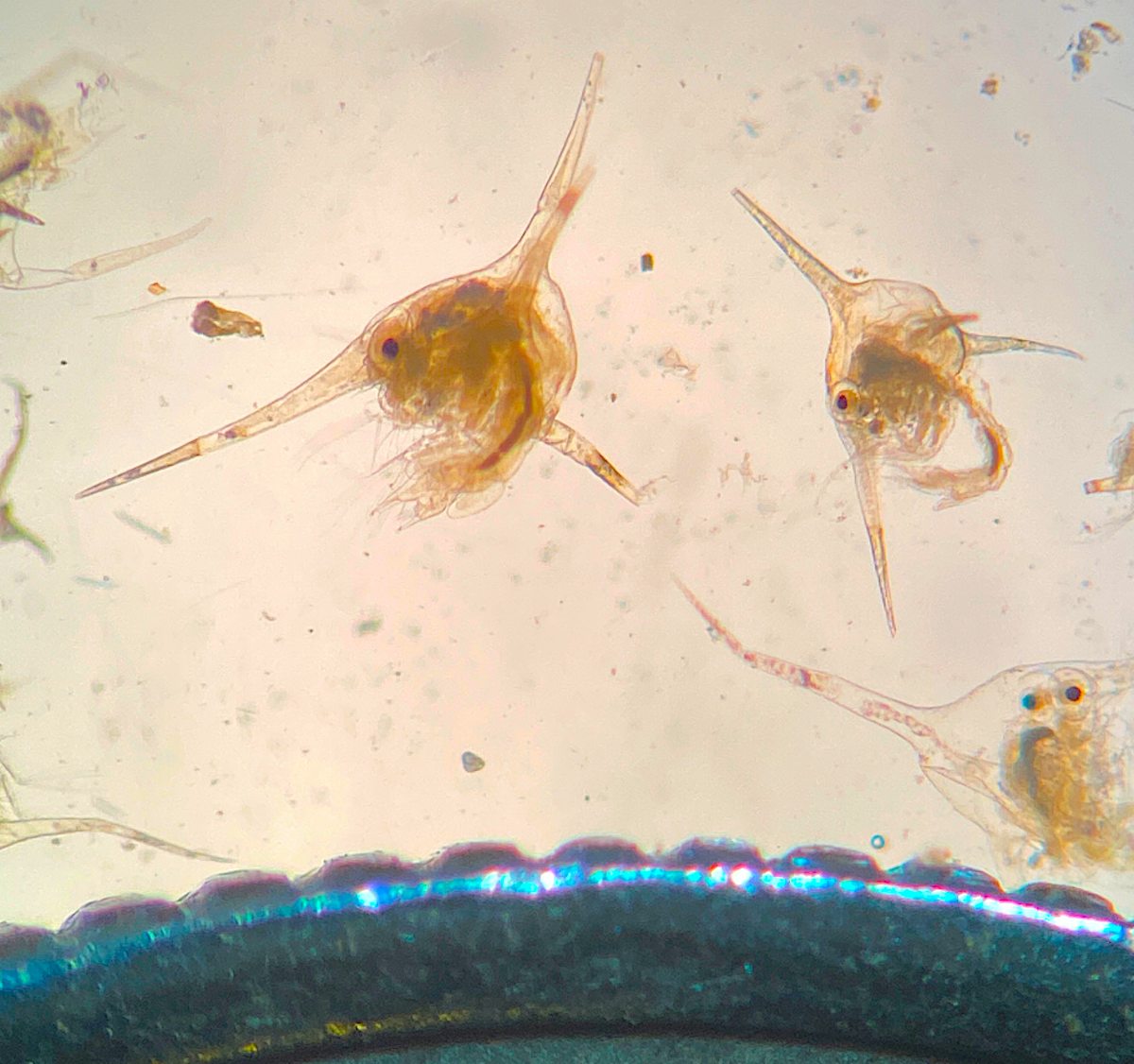 Zoea on a quarter’s edge.

If you live on the east coast of the united states or enjoy eating seafood, you most likely are familiar with the Atlantic blue crab. This feisty crustacean’s scientific name, Callinectes sapidus, means “savory beautiful swimmer” and pretty much sums up its reputation. Blue crabs are a favorite delicacy along the Atlantic and Gulf coasts — and are one of the most lucrative fishery species in North Carolina.

However, while many are familiar with the adult blue crab, few know about their strange juvenile stages. Blue crabs, like many marine invertebrates, have what scientists refer to as a complex lifecycle, which means that they go through drastic changes in body shape and location as they age, similar in some ways to a caterpillar turning into a butterfly.

As “zoea” during the first stage of their life cycle, blue crabs are a little larger than the tip of a pencil and look a bit like aliens, with three large spikes protruding from their heads, a huge eye spot, and a shrimp-like tail. Zoea hatch from eggs held on their mother’s abdomen, usually at the mouth of an estuary, or, as is the case of the zoea I study, at the inlets that punctuate the Outer Banks. After hatching, these zoea travel east out into the open ocean, where they grow and molt for about a month.

Right before each blue crab journeys back to its home estuary, it changes body shape and becomes a “megalopa.” In this stage, juveniles become more crablike, growing small claws and legs, yet retaining the large head spikes and shrimp-like tail. Megalopa ride with the changing wind patterns that mark late summer and early fall west towards the coast. Once back in the estuary, they search for an optimal habitat, before they then settle and undergo their last transition into an “instar.” At this stage, they resemble a much smaller version of the adult blue crab.

Juvenile Crabs and Choosing a Habitat 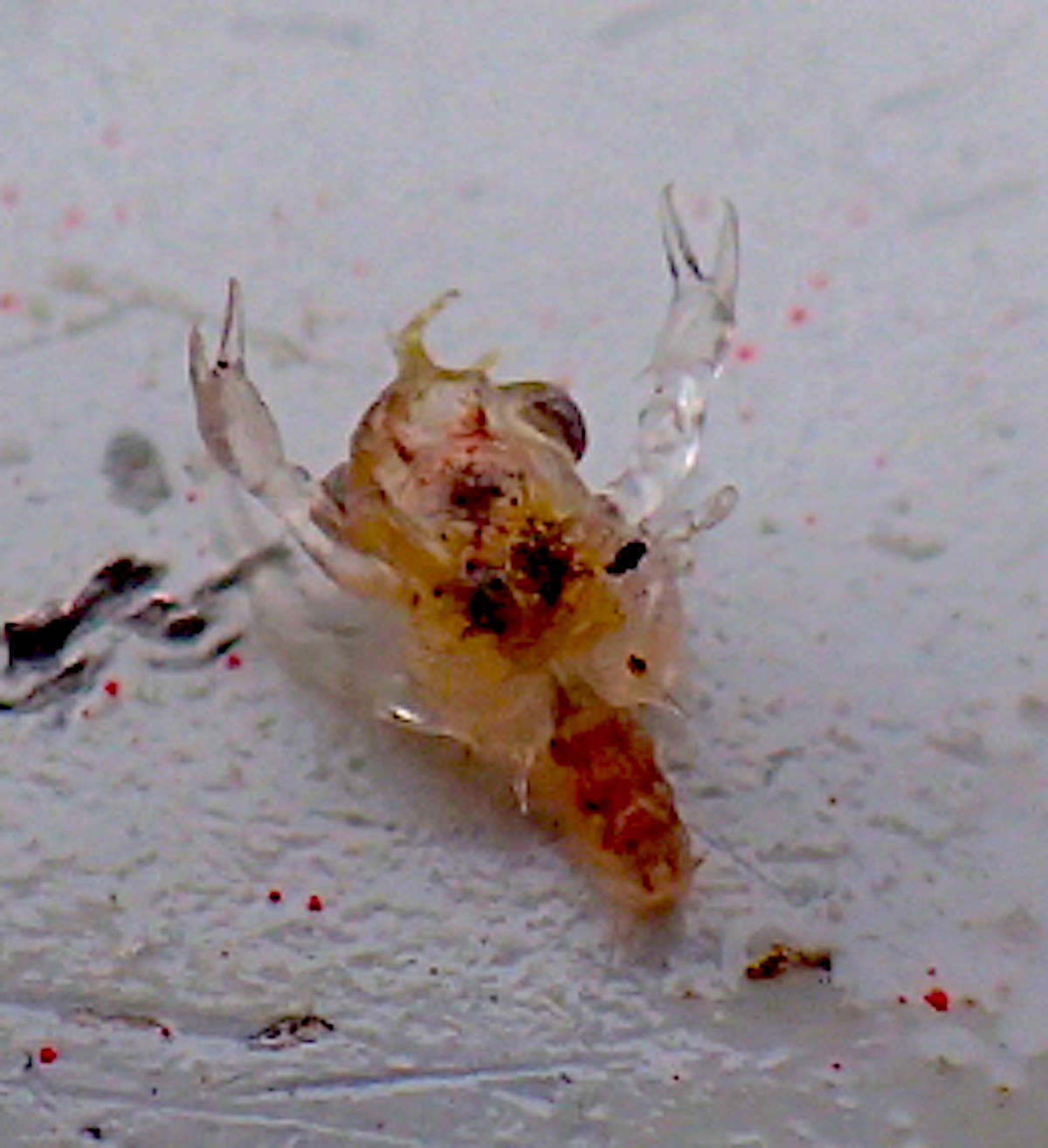 Entering back into Pamlico Sound and finding a suitable habitat is difficult due to the unique geography of the sound. Pamlico Sound is a wide and shallow basin, separated from the ocean on its eastern shore by a chain of barrier islands, with only a few narrow inlets allowing limited contact with marine waters. The western shore of the sound is equally distinctive, containing a vast mosaic of marshland, marine forests, and draining freshwater rivers.

During years with limited direct hurricane impacts, juvenile crabs will enter the sound primarily through both Oregon Inlet and Hatteras Inlet and will settle into the dense seagrass beds. As more crabs settle in these eastern seagrass beds, the population density of crabs gets too high to sustain them, and some will migrate across the sound to other habitats.

In essence, these crabs often use the eastern seagrass beds only as a landing zone before moving on to habitats on the western shore. However, during years with direct tropical storm impacts, the force of stormwater flowing into the sound can propel megalopa from the open ocean, past the eastern habitats, and directly to habitats on the western banks. 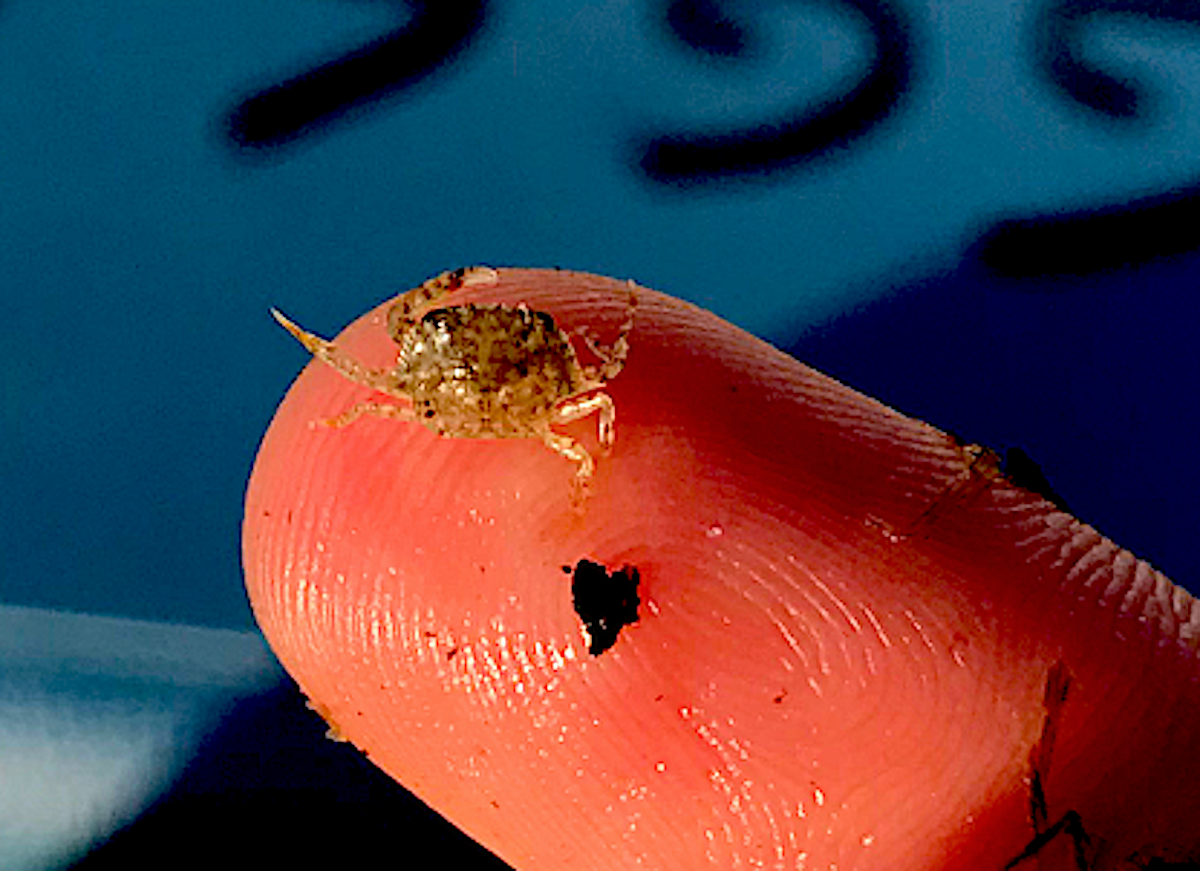 Instar on a fingertip.

This is where my research comes in. I look to understand how blue crabs use these three habitats. The complex transportation mechanisms of juvenile blue crabs make it difficult to compare the relative contribution of these habitats to the adult blue crab population. However, conservation managers badly need this information, especially with a marked decrease in North Carolina’s blue crab landings since 1999. Evidence suggests that low juvenile crab populations may be partially to blame.

That said, understanding which of these habitats contributes the greatest number of juvenile crabs to the eventual adult population is not as easy as counting crabs. Rather, we need to consider three separate factors: the density of crabs found in each habitat (how many crabs per square meter); how large an area each habitat covers in Pamlico Sound; and how evenly distributed blue crabs are within a given habitat.

Western seagrass beds, while they may have the most crabs per meter, are significantly smaller than the other two habitats. This means when I multiplied the density of crabs by the area of the habitat to get total abundance, I found that while the density was high the total abundance was low — which suggests that western seagrass beds do not contribute significantly to the overall crab population.

On the other hand, eastern seagrass beds are by far the largest, covering orders of magnitude more area than both the western seagrass and SDH beds combined. If I multiplied the density of blue crabs found in the eastern seagrass bed by its area, this habitat would be, by far, the most productive — and I would have answered our question.

I realized, though, that while I had measured blue crab density many times and in many locations within the eastern seagrass beds, most of my locations were located near either Oregon or Hatteras Inlets and would therefore be the closest habitats to all the incoming megalopa. 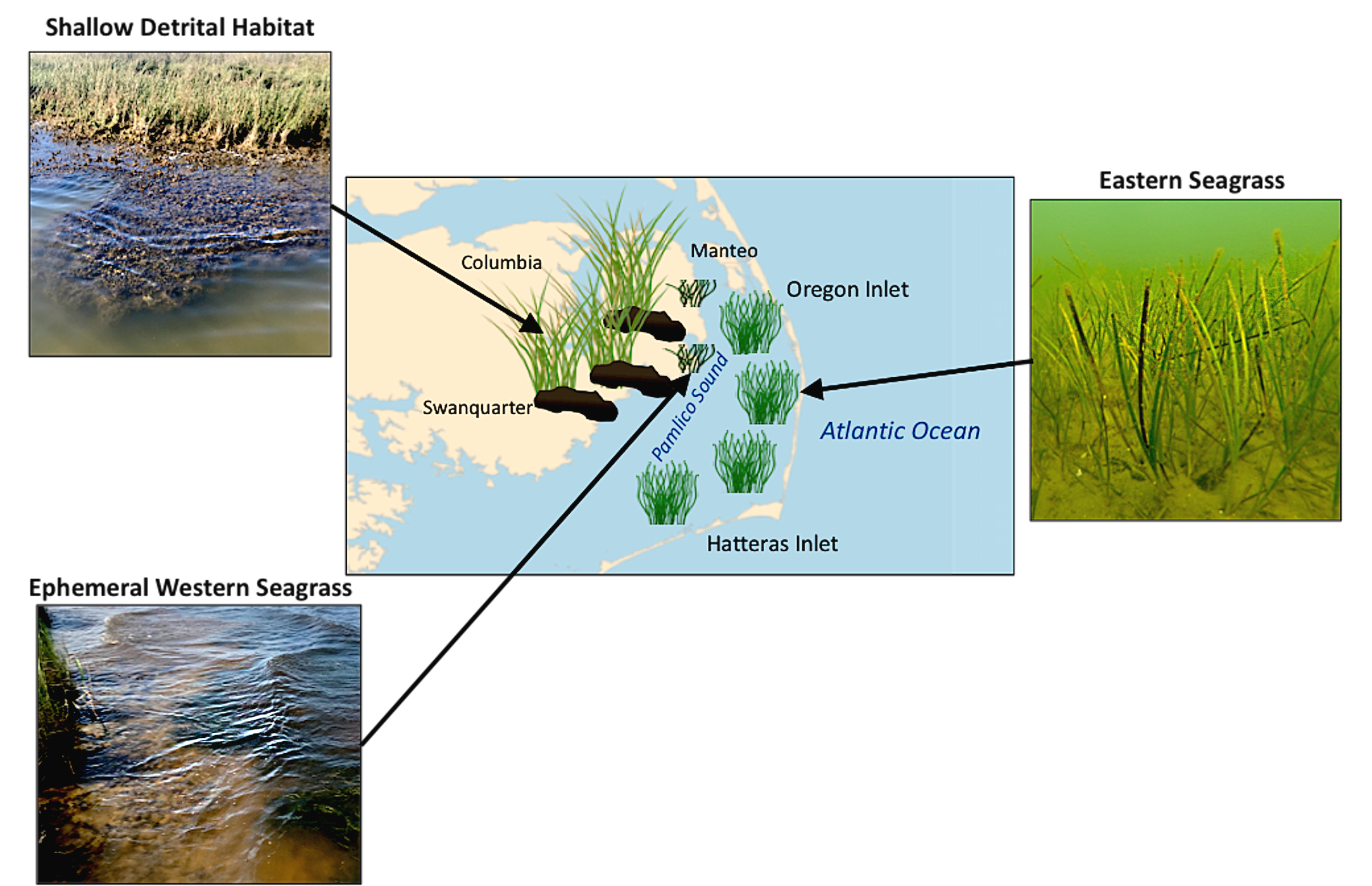 When I increased the number of sampling locations for all three of the habitat types, I found that in the eastern seagrass beds the density of blue crab decreased significantly the farther away they were from either Hatteras or Oregon Inlets. While blue crab densities were very high near both inlets, seagrass beds located near Cape Hatteras and far away from the inlets had almost no crabs at all. Even more interesting is that this trend does not hold in the western shore habitats.

I currently am working on a model to combine the factors of crab density, habitat area, and crab distribution to calculate what proportion of juvenile blue crabs each habitat supports. Our results highlight the need to understand each of these factors before making decisions about the value of different habitats.

Furthermore, the results also support the theory that blue crabs use the eastern habitats as a landing zone, highly populating habitats near the inlet before migrating across the sound to the western habitats, where they spread out. Our study additionally highlights the importance of western habitats of Pamlico Sound in supporting the blue crab population — vital data for the fisheries and conservation managers responsible for helping to ensure and support a long and profitable blue crab fishery in North Carolina. 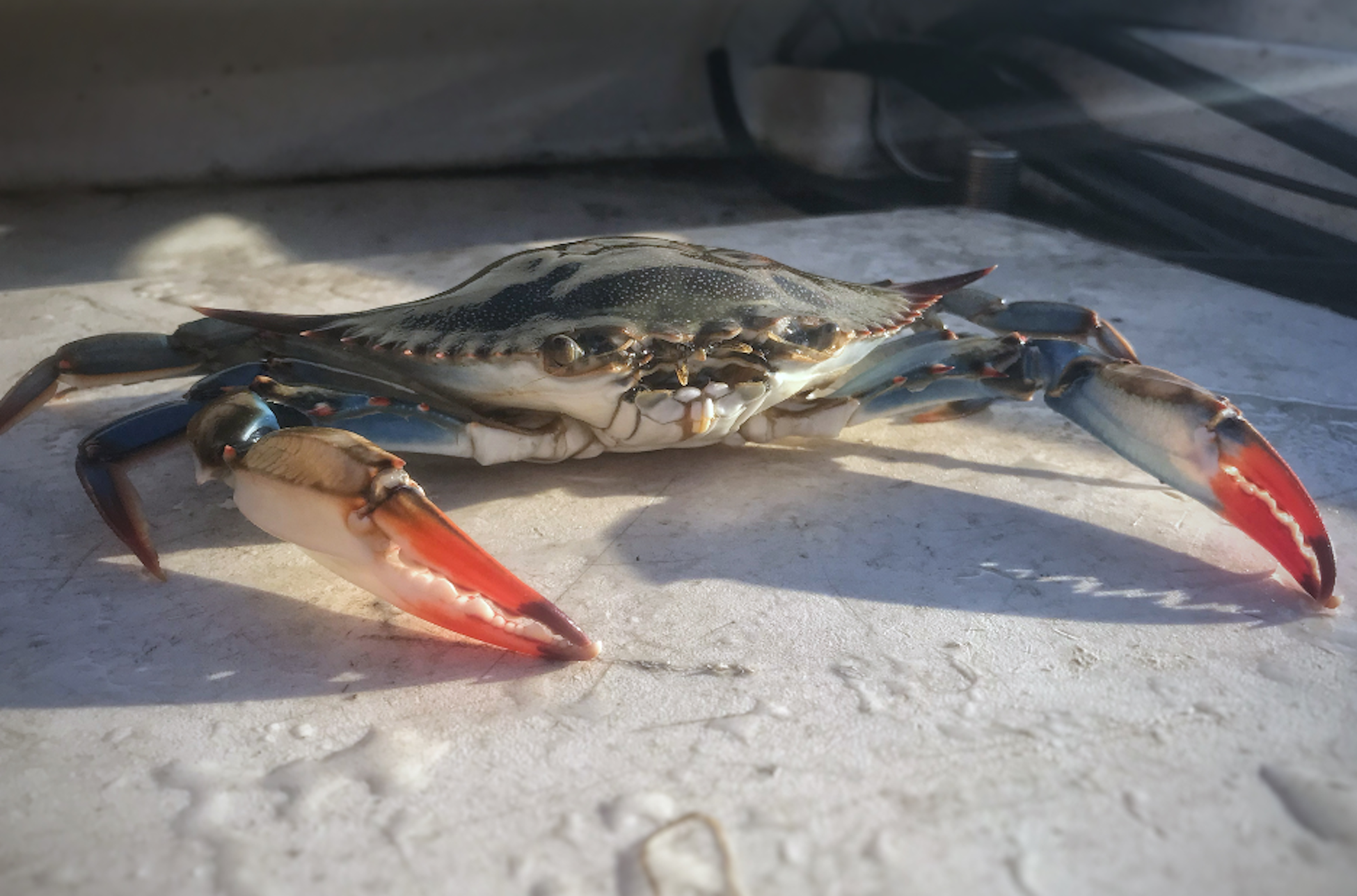