Hopefully, your vacation plans will take you to a North Carolina seashore, where you can spend time wandering along the water’s edge, contemplating the nearshore ocean universe. 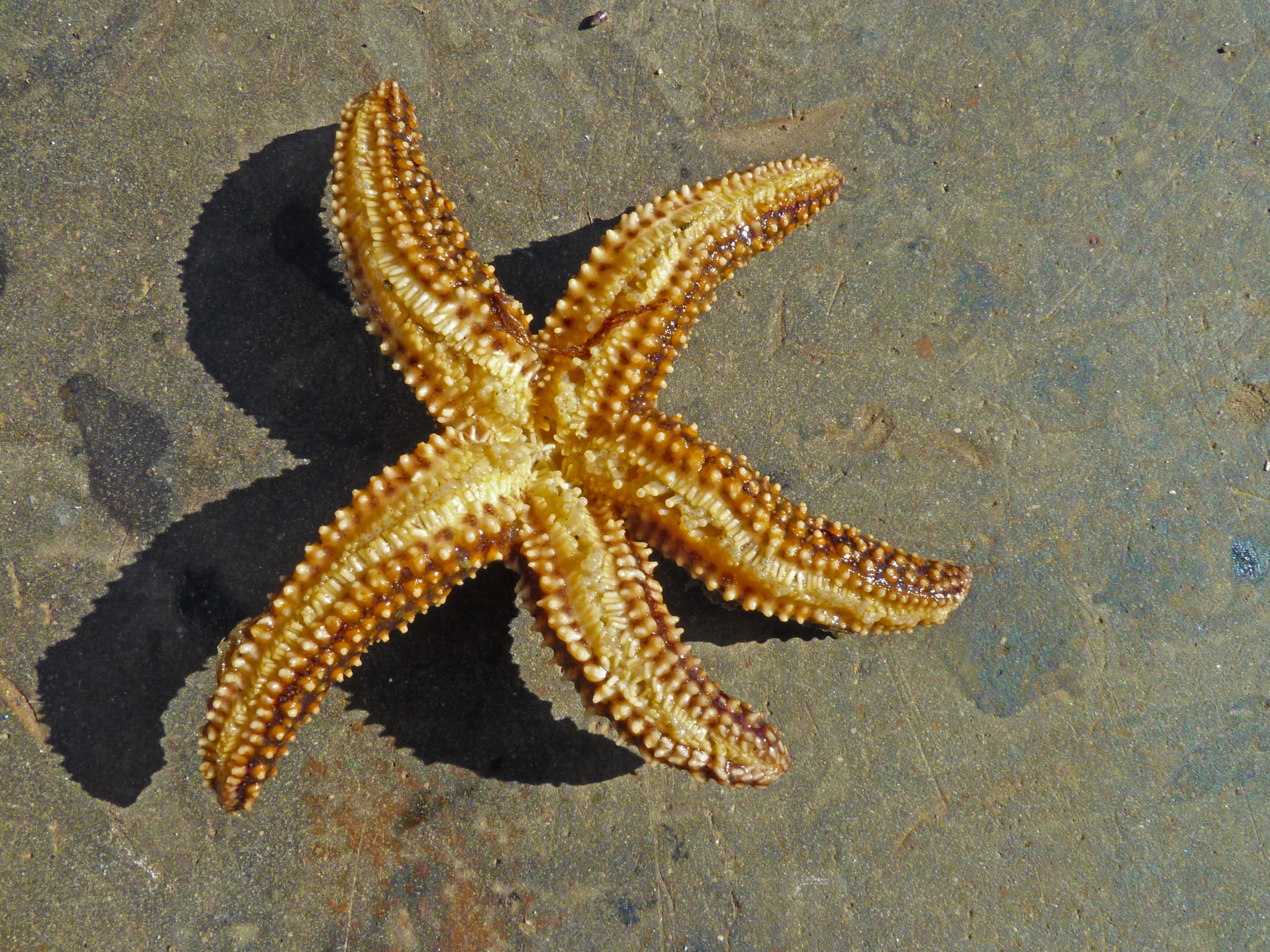 A star by any name: Asterias forbesi. Paul Morris/CC BY-SA 2.0.

If you’re lucky, maybe you’ll find something special. Keep an eye out for starfish, sea stars, or asteroids — all common names for the star-shaped animals that are fun beachcombing finds. These creatures belong to the phylum Echinodermata, whose name stems from the Latin words echinos, for spiny (or hedgehog), and derma, for skin. Echinoderms are spiny-skinned animals that also include brittle stars, sand dollars, sea urchins, and sea cucumbers.

Echinoderms exhibit radial symmetry, meaning that they have a central part, with other parts arranged around that central axis. For a clearer idea of radial symmetry, think of a daisy — the white petals are arranged around the yellow center. Most sea stars have five arms, although some have seven, and some have 10 or more. The sunflower star, for example, may have up to 24 arms!

The bottom of the sea star is called the oral surface, because that’s where the mouth is. If you look at that side, you’ll see tiny tube feet with suction cups that line each arm. Those sticky tube feet help the animal hold onto its prey — usually bivalves, like clams and scallops.

The feet pull the mollusk’s two shells apart just enough so that the sea star can extend its stomach from its mouth, located in a structure called the central disc, where all the arms meet. Digestive juices from the stomach dissolve the prey’s body, which is then absorbed by the stomach’s lining.

Examine the sea star’s central disc and you’ll notice a structure called the madreporite, or sieve plate, which pulls water into the sea star’s water vascular system. This hydraulic system channels water to the tube feet through canals. The combination of muscular contractions and changes in water pressure causes the tube feet to extend and contract, moving the sea star’s body along the sandy bottom.

The top side of the sea star is called the aboral side, because it’s opposite the oral side. The bumpy-skinned aboral side is covered with loads of tiny pinchers called pedicellariae that help clean the rough surface.

Although sea stars cannot see images, eyespots on the end of each arm enable them to see light, dark, and shadows.

Sea stars have a pretty cool ability called regeneration. If a sea star loses one of its arms, it can regenerate, or regrow, that appendage, as long as part of the central disc is still attached. It may take a year to get back to full size. 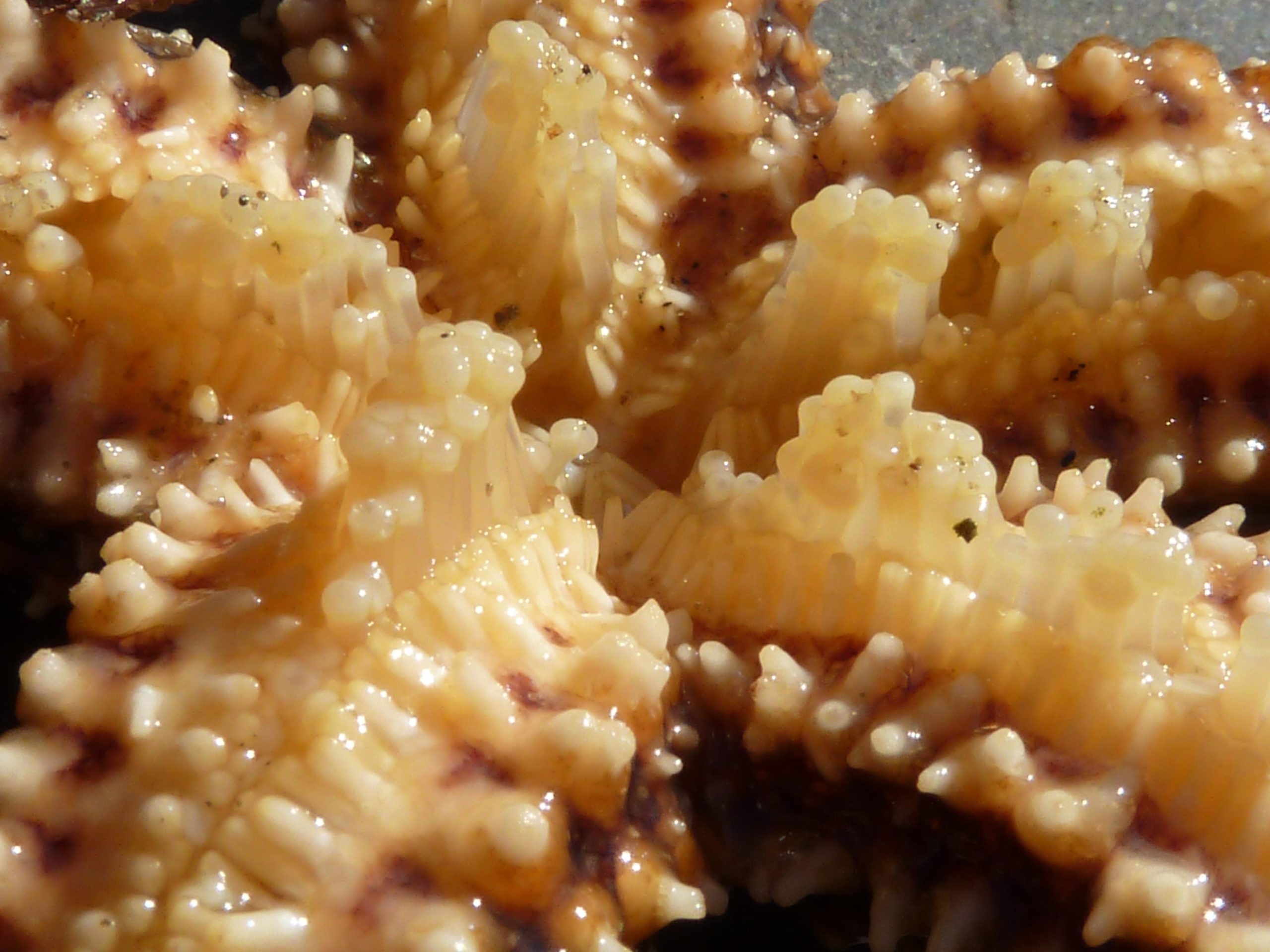 Most scientists, naturalists, and aquarium educators now refer to these echinoderms as “sea stars” rather than starfish, since they do not have scales, they do not swim, and they are not “fish,” even though they live in water. Common names can differ from region to region, and from state to state.

If you want to know the scientific name of an animal, you must check the binomial, or two name, classification system developed in the early 1700s by Carolus Linnaeus.

According to Linnaeus, our common sea star, also called Forbes’ sea star, is classified this way:

But remember: Scientific names also change from time to time, as in the case of a well-known smooth cordgrass found in North Carolina.

from the Winter 2019 issue of Coastwatch