In environmentally controlled growth chambers at Elon University in the piedmont, far from its usual habitat in the upper intertidal zones of estuaries, black needlerush, Juncus roemerianus, seedlings are growing — slowly.

For a plant adapted to an environment subject to rapid salinity changes and the whims of coastal weather, slow growth may be normal, according to Brant Touchette, a biologist at Elon and principal investigator for the Juncus study, which is funded by North Carolina Sea Grant.

Why should needlerush be in a rush to set down roots when it is accustomed to an area with relatively few vegetative competitors for space?

If the Juncus growth rate in the lab has been slow, the same cannot be said for the student researchers contributing to the study. Their academic growth has found fertile ground in Elon’s “engaged learning” philosophy and Sea Grant’s commitment to educating scientists at all academic levels. Thus, undergraduates Mariana Poole, Kirsten Rhodes, Scott Russell and Gracen Smith have research experience usually reserved for graduate students. 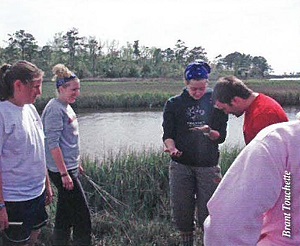 Since last spring, Poole, Rhodes and Smith have maintained the Juncus seedlings. Initially, the study was to have looked at how increased levels of carbon dioxide affected growth rates and salt tolerance of Juncus. But the students quickly learned that experiments don’t always go as planned. The slow growth of the brown, needle-like marsh grass meant that once-weekly measurements became monthly. The study expanded to include Spartina alternijlora (salt marsh cordgrass) and Scirpus robustus (salt marsh bulrush) and those species’ responses to various freshwater and saltwater conditions.

A better understanding of how marsh plants respond to climatic and environmental change, such as fluctuations in salinity and increased carbon dioxide in the atmosphere, can have implications for coastal management and wetland restoration, Touchette explains. These plants provide a variety of ecological benefits — from stabilizing the shoreline to being the base of the food chain for numerous estuarine organisms.

Commercial nurseries already use carbon dioxide to boost plant growth, but scientists still don’t understand how sustained atmospheric increases in the gas might affect plant growth over time, Touchette says. If growth of marsh grasses increases, will the elevation in peat that builds as the plants decay keep up with rising sea levels?

The original question of the study remains as to how higher carbon dioxide levels associated with global warming might affect salt tolerance of Juncus.

“Some people suspect that storms will increase in number and intensity, and that will change the landscape of coastal areas,” Touchette explains. “Marshes are likely to shift quite a lot, and salt may enter areas where water is fresh.”

Recent die-offs of Spartina alterniflora in southeastern and Gulf states have coincided with prolonged drought in those areas, Smith explains. Increased salinity levels have been blamed for the so-called “brown marsh syndrome” because marshland salinity rises with the diminished inflow of fresh water.

Spartina is the lush, green marsh grass that can handle the salinity from the sea, Smith and Poole explain, while brown Juncus hangs back in areas where water is less salty. 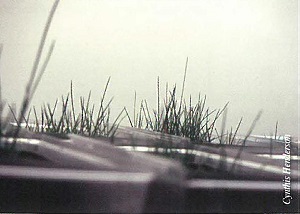 Because Juncus is occasionally subjected to higher salinity levels, whereas salinity levels are more constant for Spartina, it could be assumed that Juncus is physiologically more adept at tolerating salinity changes. But that’s not what Smith and Poole found in their study.

Smith points to bar graphs on a research poster to show how Juncus shuts down when exposed to salt water, while Spartina tends to go with the flow.

“Spartina is the boy scout of the coastal plants,” prepared for whatever salinity changes come its way, she says.

Smith explains that a leaf’s xylem functions like veins that pull water into the plant. But because water tends to follow areas with greater dissolved substances, water will be pulled out of an ordinary plant suddenly subjected to salt water. Coastal plants compensate by regulating their cellular solutes so that they can stay hydrated, exchange gases and continue photosynthesis.

In the greenhouse at Elon, Touchette demonstrates how Spartina adjusts to salinity changes. He runs a fingernail along a green leaf and scrapes off a salty substance excreted by the plant when subjected to salt water.

In contrast to Spartina‘s ability to adjust to salt exposure, Juncus has an opposite stress response, Poole notes.

Smith and Poole explain that Juncus seems unable to “sweat out” solutes through its minute pores, or stomata. Instead, the plant decreases the amount of water vapor it gives off through its stomata to hold onto moisture. The response limits photosynthesis and productivity.

For Juncus that response is like, “going into its bomb shelter and eating its canned food,” Poole says.

Ultimately, the study suggests high vulnerability of a valuable marsh plant to climatic or human-caused alterations of freshwater flow into the wetland ecosystem.

Despite its interesting findings, the Elon study is about more than just the growth characteristics of plants. It’s also about growing scientists to meet the challenges facing our coastal areas, according to Steve Rebach, associate director of North Carolina Sea Grant.

“While Sea Grant has traditionally supported graduate researchers, we are always looking for opportunities to involve undergraduates because this is where careers in science often begin,” Rebach says.

Such is the case with Touchette, whose research career began when he was an undergraduate studying aquatic plant ecology. As a graduate student at North Carolina State University, he worked on a Sea Grant project to examine seagrass physiology and how nutrients influence plant growth and survival. 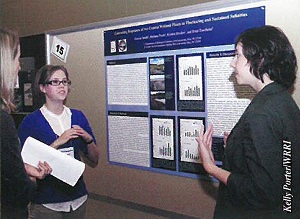 The students Touchette works with at Elon are all majoring in biological studies and at least three have expressed interest in research careers.

Rhodes, Russell and Smith plan to attend graduate school. Smith and Rhodes would like to study botany-related fields, and Russell is interested in pursuing ecology and natural resources. Poole says she is drawn more toward the music side of her double major, but that the research experience has been rewarding.

“At the undergraduate level, traditional education allows students to become knowledge consumers. But, when students are actively engaged in the learning process, especially in research, students change hats and become insiders — or knowledge producers,” Touchette says.

“This is empowering because now they are contributing to science.”

In October 2008, the four students demonstrated their findings and enthusiasm for their research when they presented posters at the Water Resources Research Institute (WRRI) Symposium at NC State. WRRI helps administer and promote federal and state partnerships in research regarding water-related issues. The symposium is a chance for the undergraduates to interact with professionals and compete with graduate students in poster competitions, says Kelly Porter, environmental education and communications coordinator for WRRI.

Touchette says that poster presentations provide students with a great chance to network, and the atmosphere is lower key than giving a talk in front of a large group.

“The students feel the attention is on the poster, not on them,” he notes.

The result is an audience that is “generally positive and encouraging, especially when they realize that these are undergraduates,” Touchette says. “The students come away excited, and they just can’t wait to get back to the lab.” 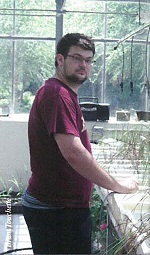 At the same conference, Russell presents a separate poster on cyanobacterial blooms. His involvement in the marsh plant study branched off into an analysis of a seven-year data set of the blooms in the lower Pamlico River. The data are from the N .C. Department of Environment and Natural Resources’ Division of Water Quality (DWQ), while the study was funded by Elon’s Student Undergraduate Research Experience program (SURE) and North Carolina Sea Grant.

Cyanobacteria are bacteria capable of photosynthesis that can create water quality problems, including oxygen depletion during dieback and production of toxins that pose health risks.

By analyzing data on various physiochemical factors collected by the DWQ, the study found relationships between nutrients such as nitrogen and phosphorus and cyanobacterial blooms.

For Russell, the project presented a learning experience on several levels, from the professional collaboration with the DWQ, to the technical challenge of working with artificial neural networks to analyze data. These networks are mathematical models based on how neurons are believed to process information in the human brain — a nonlinear process that can reveal patterns or relationships among complex data sets. 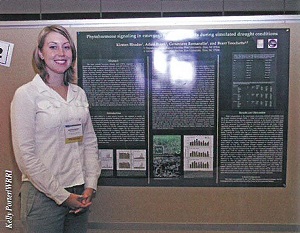 Russell says he’s known since high school that he wanted to work in biology, but his experience with this project adds a new dimension. “This research experience has inspired me to pursue research as a career,” he says, adding that he now plans to seek a doctorate.

Rhodes will approach graduate school with a marked level of confidence acquired from her undergraduate experiences. In addition to being a co-researcher on the marsh plant study, she also presented an award­-winning poster at WRRI on how abscisic acid functions in coastal plants as a hormone to signal the need to conserve water. Rhodes says she is interested in a career in research. She is exploring possibilities for graduate work in botany or agro-ecology.

The carbon dioxide portion of the Elon marsh plant study will be extended into 2009. The project likely will include at least one new undergraduate researcher whose academic progress will grow, no doubt, along with the Juncus in the lab — only faster.

This article was published in the Winter 2009 issue of Coastwatch.