Diligence and hard-earned expertise contributed to a recent breakthrough that has positioned farmed striped bass for commercial success. And scientists behind the innovation say they couldn’t have done it without another key ingredient: luck.

When he was 34, the Swiss engineer George de Mestral set off with his dog into the alpine countryside on a hunting trip. After crossing flowering fields in the crisp, glacial air on his return, he discovered that burdock burs thoroughly covered his dog’s coat. At home, he picked the persistent clingers from his pet’s fur, one by one, marveling at their tenacity, so much so that he had to examine them under a microscope.

What he saw under the lens would impact the aerospace and apparel industries, as astronauts, scuba divers, skiers — even toddlers too young to tie their own shoes — would come to use his invention. His microscope revealed hooks by the hundreds covering each bur. Thanks to that hunting trip with his dog, George de Mestral had discovered the mechanism for what he would call “Velcro.”

The worlds of invention and discovery have long relied on chance, even on sheer, dumb luck. From the detection of X-rays to that first accidental culture of penicillin, from Silly Putty to the Big Bang’s cosmic signature, from insulin to Vulcanized rubber to Vaseline — benevolent happenstance has led to groundbreaking advances of all sorts. 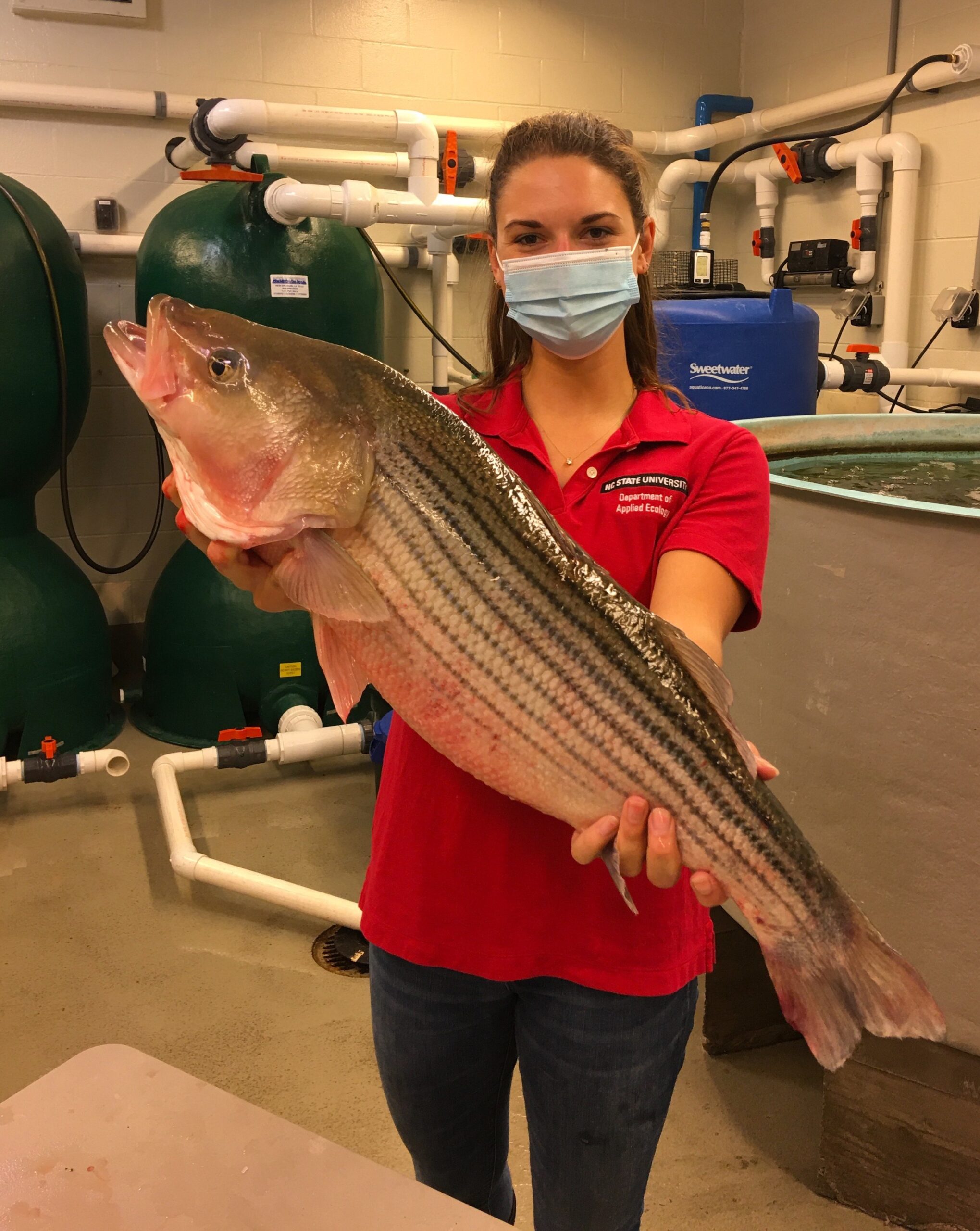 The expectation that such twists of fate will lead to great discoveries has long made its way into pop culture — to such an extent that an old marketing campaign sold Reese’s Peanut Butter Cups on the notion of invention by collision between two lovestruck moviegoers. One held a broken candy bar, the other a jar of peanut butter with a chunk of chocolate lodged in it. Anybody with a sweet tooth knows the rest is history.

So why shouldn’t we have expected fate to intervene when NC State University scientists tried to get farmed striped bass to reproduce?

Since the 1980s, in a Beaufort County town of 520 residents, known for its phosphate mine and fossil museum, scientists have been breeding hybrid striped bass. The epicenter for their research, the Pamlico Aquaculture Field Laboratory, sits in Aurora, North Carolina, not far from the southern terminal on the Pamlico River ferry route.

The lab has access to numerous sources of freshwater and seawater. It also includes 16 ponds, a hatchery with recirculating water systems, a 300-foot pier, and a boat ramp. There’s even a dorm for the diehards who want to sleep overnight where they work.

NC State scientist Benjamin Reading (top photo), who began working at the field lab nearly two decades ago, says the research in Aurora has been essential in supporting an industry flooded with fish from abroad.

“Nine out of 10 seafood products that Americans consume are imported,” says Reading, who also serves as program coordinator for StriperHub, a National Sea Grant initiative to advance the commercialization of marine striped bass. “But there’s a significant untapped demand for striped bass — and we can help to satisfy those consumers.” 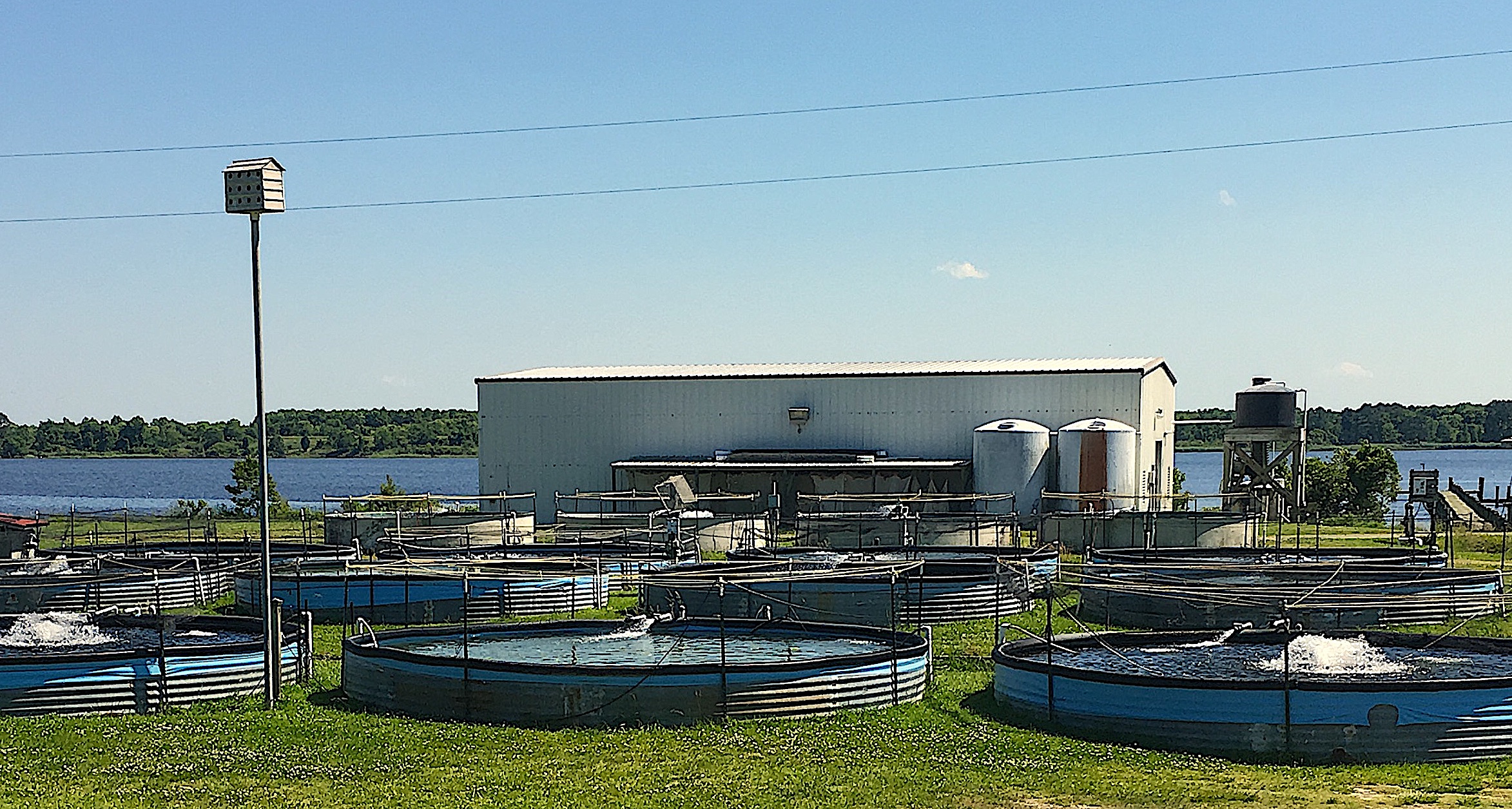 Unlike the hybrid striped bass, however, the striped bass also thrives in saltwater and grows to a larger size.

“We’re building on NC State’s research and development of six generations of striped bass that have been bred in captivity,” Reading explains. “And the early reception from consumers and servers of traditionally wild-caught striped bass shows they love the farm-fresh taste, too.”

“A candidate species has a premium price, high consumer demand, and adapts well to localized production,” Borski says. “Among white-fleshed marine fishes in the U.S., there aren’t many of these. But striped bass meets all the criteria.”

Which is why, Reading says, researchers probably would have raised striped bass from the start, instead of hybrid striped bass — if they had possessed the knowhow. 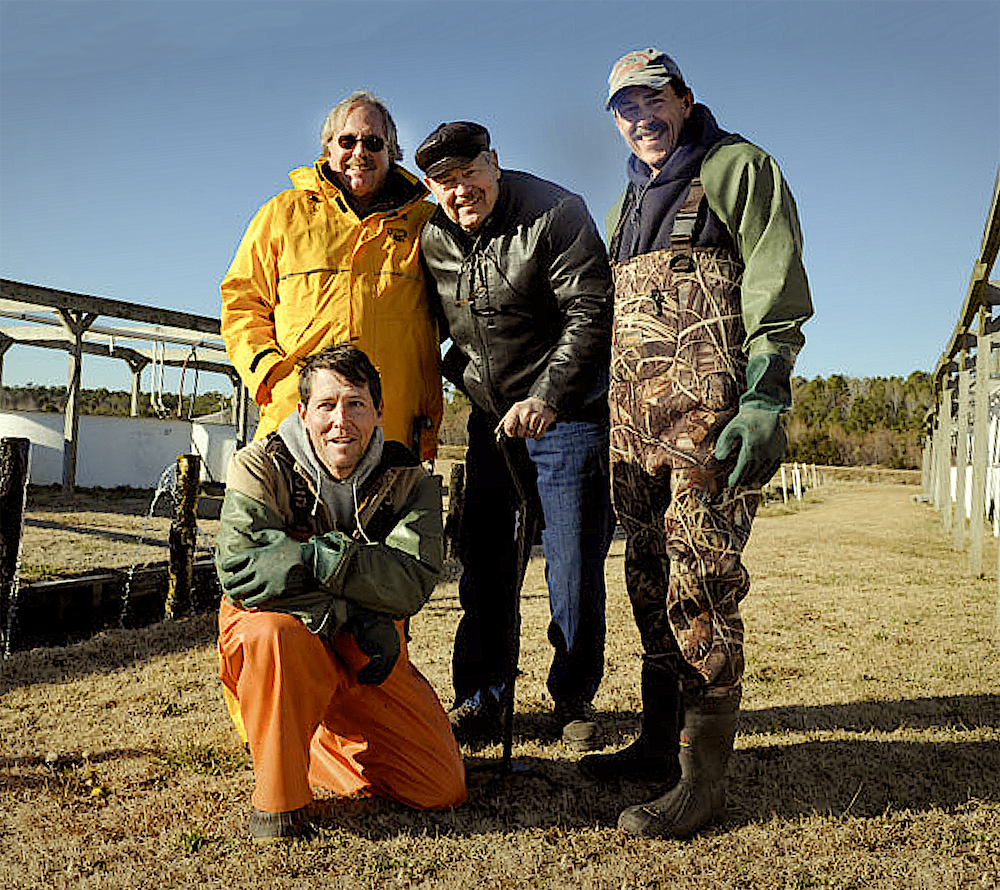 Ernest Hemingway, who knew something about fish, once famously told his son, “You make your own luck.”

“Farming striped bass provides an opportunity to develop and sustain the population of these fish,” Reading says. When scientists at the Pamlico Aquaculture Field Laboratory first began breeding captive striped bass without hybrids, though, they had to rely on hormones to induce spawning. The process was expensive and complicated, requiring technical expertise.

Persistence, dedication, educated guesses, and trial and error propelled their research. Of course, the “error” in “trial and error” is never as glamorous as the trial or the overall pursuit. After telling his son to make his own luck, the rest of Hemingway’s advice was more cynical: “You know what makes a good loser?” he asked. “Practice.”

But The Old Man and the Sea author had forgotten to add that practice was also the foundation for breakthroughs on spawning farmed striped bass. In collaboration with David Berlinsky at the University of New Hampshire, Reading and his colleagues hypothesized about the effects of injecting only half a sample of striped bass with hormones, and then they found that doing so prompted the others to spawn.

In addition to discovering a method that saved half the money and hassle, the team learned critical new information: that hormonefree fish could spawn in captivity.

“We realized we were in new territory,” Reading says. 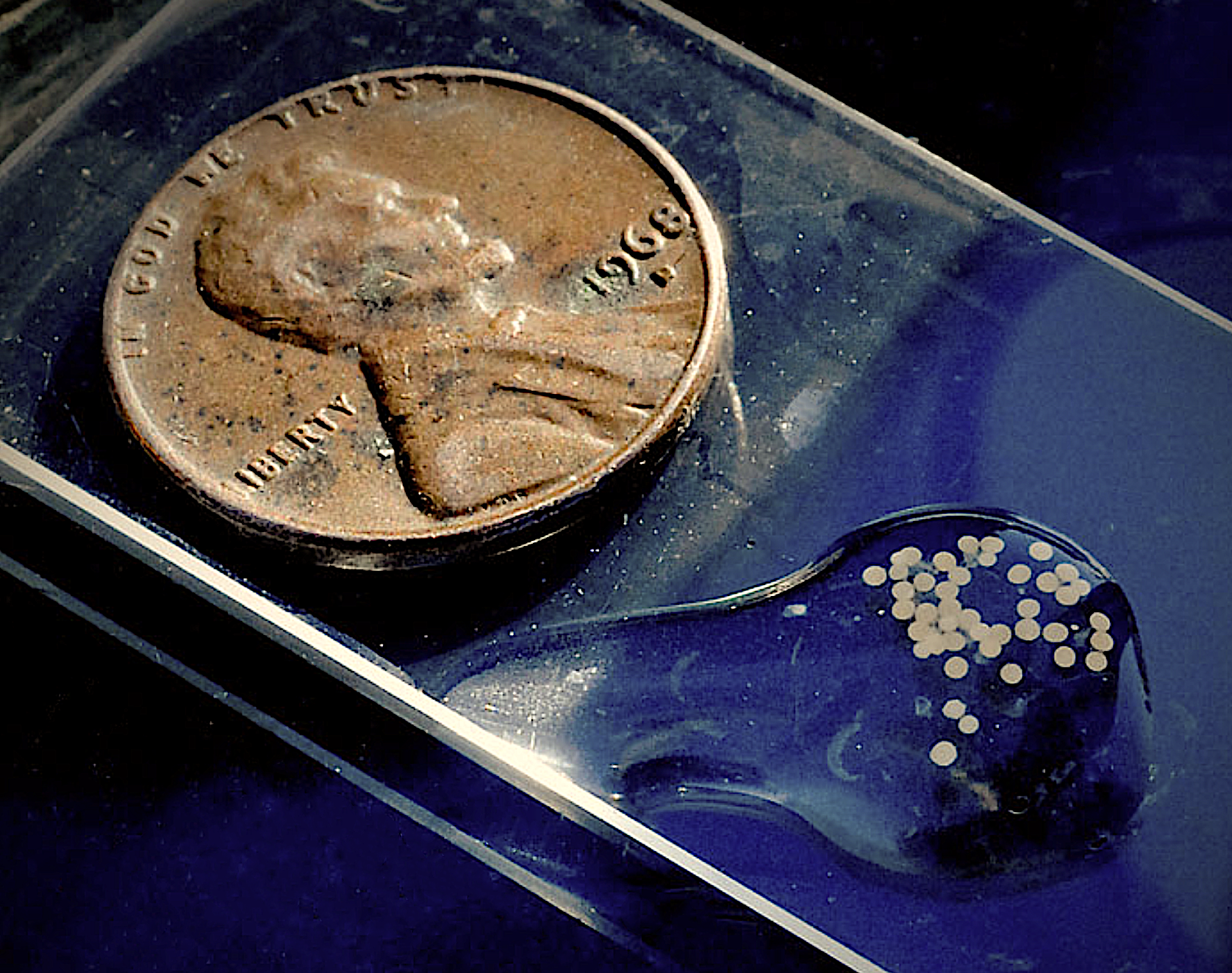 “I always tell people this story is about serendipity,” Reading says.

First, he explains how when scientists at the Pamlico Aquaculture Field Laboratory want their striped bass to spawn, they carefully set the environmental conditions in their 30,000-liter tanks to fool the fish into thinking they’ve gone upriver.

“Striped bass typically migrate from cold, salty estuary waters in winter and head upstream into warmer and fresher waters in springtime, when they spawn,” he says. “We try to emulate those conditions in the tanks.”

As a matter of practice, they also hold males and females in different tanks for the sake of tracking the precise ratios of each when they then bring them together. The proportion of male to female striped bass can affect how efficiently they spawn, which is why Reading’s team always took special care to keep them separate.

“One day we came in, and we had accidentally mixed some males and females without any hormones,” Reading says, laughing. “From the standpoint of running a rigorous scientific experiment, at first we thought it was a catastrophe. But the striped bass had spawned. And then we thought, well, why the heck would they do that?”

The team quickly switched from “Oh, no, what are we going to do?” to “Let’s sit down and write down everything we know about what just happened and see if we can recreate it.” Then they spent several months trying to emulate environmental conditions for the accident, studying how it worked, and refining the process.

“Sure enough,” Reading says. “We showed you could replicate it. Dial up the temperature and drop the salt. Then boom.”

Magic at 18° C, or 64.4° F, with no salt — and, most importantly, no hormones — all with a single species. It was a feat no one ever before had reported achieving with captive striped bass. 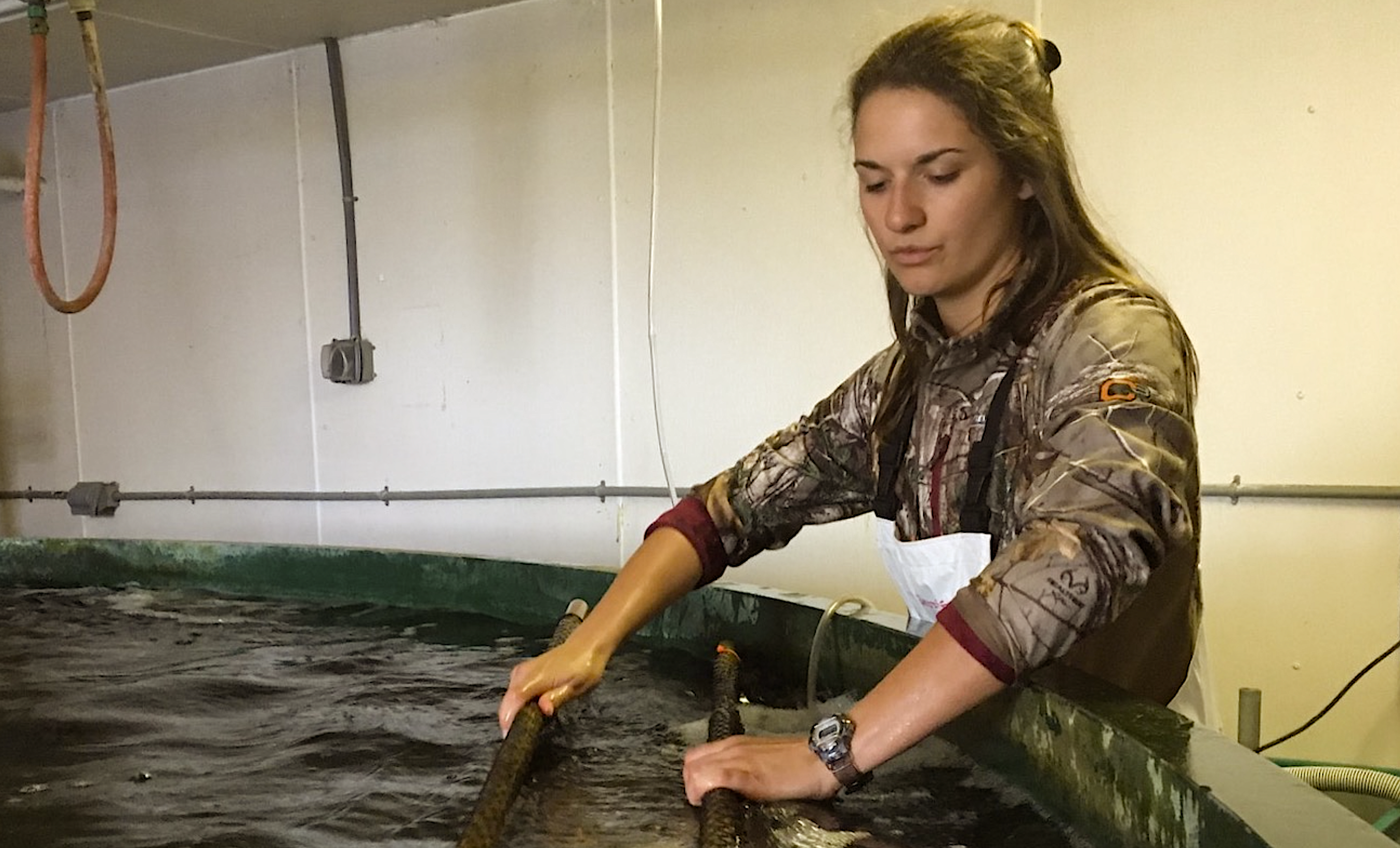 Over the years, Reading and his team refined their methods, determining that bringing together 25 male and 25 female striped bass maximizes efficiency. “The process has come a long way,” says Andersen (here). Photo by Erin Ducharme/NC State News.

“Our new method simplifies the whole spawning process,” Reading says. “Now, you don’t need two species on site. You also don’t need the hormones, which are expensive, require a prescription from a veterinarian, and are much more technically difficult to work with. Compare all that to just putting fish in a tank now and letting nature go to work.

López, who also serves as StriperHub’s principal investigator, likens the surprise behind the Reading team’s discovery to “that Alexander Graham Bell moment,” when the inventor startled his assistant with the line from the famous first phone call: “Mr. Watson, come here.”

The Reading team’s new method had been born from the “error” in “trial and error,” but it was also, of course, the product of decades of research and hard work. Reading and his colleagues soon could produce 5 million larvae from a single spawning event with captive striped bass.

“That yield is the equivalent of what used to take the time and resources of an entire season’s effort for our team,” says Reading. “It’s a revolutionary change, and it suggests high potential for scaling up to commercial levels.”

At this point, Reading’s team has optimized the process, determining that bringing together 25 males and 25 females maximizes efficiency. Two recent research articles in the journal Aquaculture describe their findings.

“The process has come a long way,” says coauthor Linnea Andersen, a Ph.D. student at NC State. “It’s become so standard for us, but when I first started on the project in 2017, we were developing this brand new approach.” 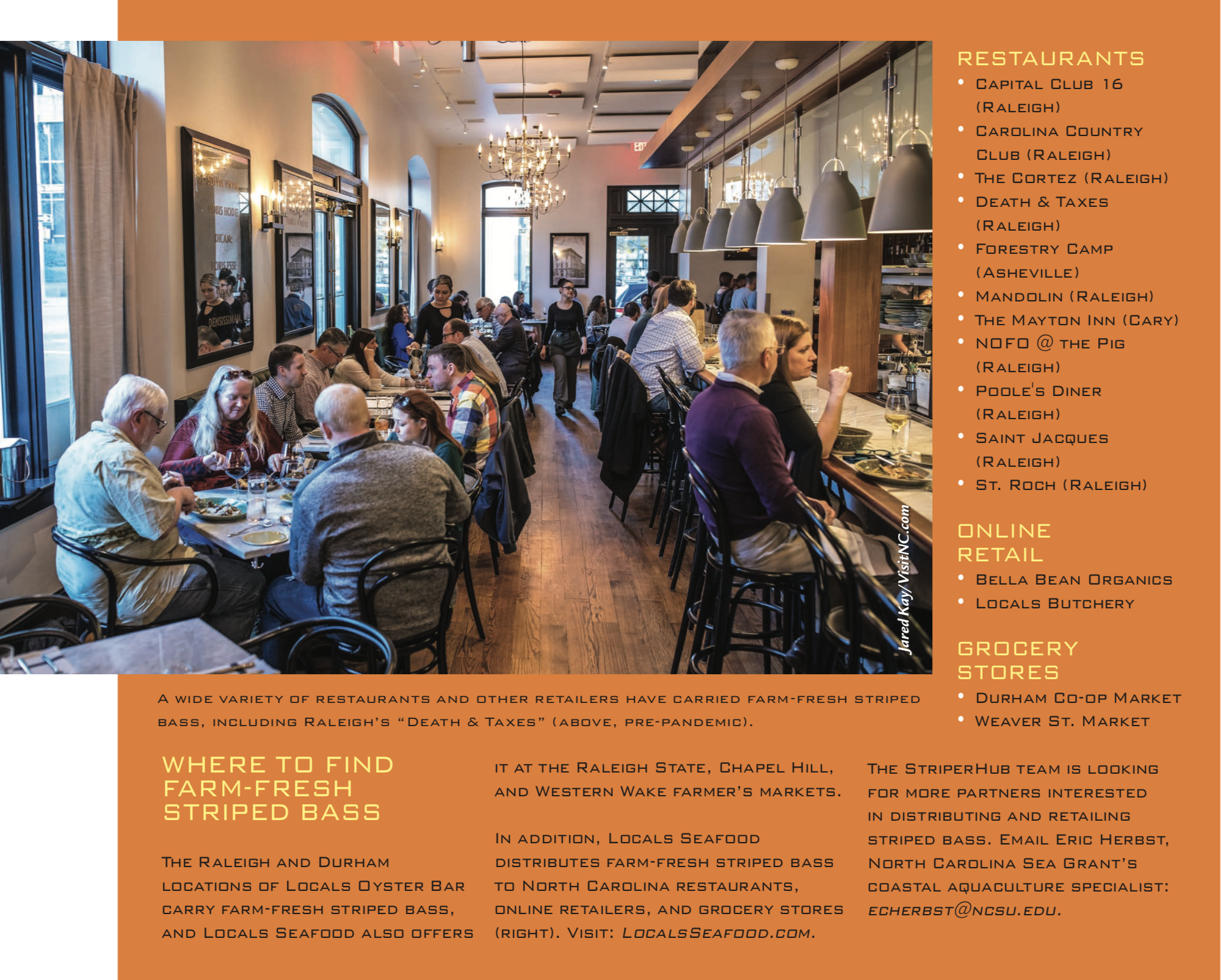 Because the hybrid striped bass industry reaps tens of millions of dollars annually, the implications of a simpler, cheaper, and more efficient means of producing striped bass larvae are significant. Reading says the new, hormone-free method could seed the whole industry with as few as six or seven spawning events annually.

Not only does the new production method cut costs and reduce challenges, he adds, farm-raised striped bass can weigh in at 3 pounds apiece, roughly twice the size of domesticated hybrid striped bass.

According to López, the StriperHub project will help streamline commercialization of the species.

“Through StriperHub, we’re disseminating new findings like these about state-of-the-art production techniques and tips,” López explains. “We’re also developing education and training programs, clarifying permitting and licensing procedures, and promoting outreach and visibility among producers and consumers of striped bass.” 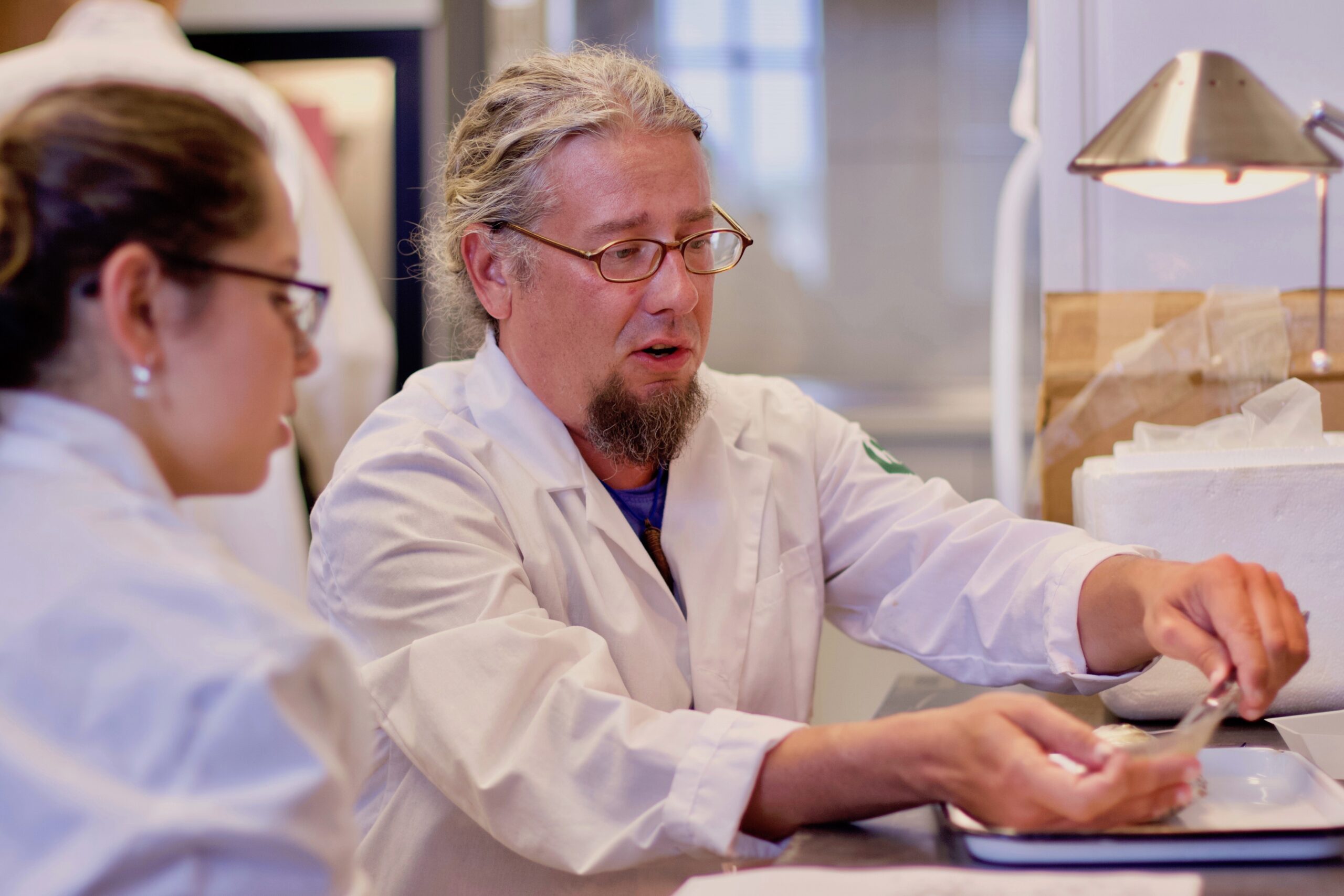 In addition to serving as program coordinator for StriperHub, NC State’s Ben Reading (right) directs the National Program for Genetic Improvement and Selective Breeding for the US Hybrid Striped Bass Industry. Photo courtesy of NC State’s Department of Applied Ecology.

Reading believes many farmers will see the value of diversifying their crop by also raising striped bass.

“Our production of larvae at this level positions us well to supply producers of fingerlings” (finger-sized juvenile fish). “Producers can use the larvae to create fingerlings for distribution,” he says. “Last year, we also grew 150,000 fingerlings ourselves that we sent out to farmers in our state.”

In 2019 and 2020, Reading says, StriperHub supported bringing roughly 8,500 pounds of farm-raised striped bass to North Carolina markets — and the project continues to distribute 200 to 400 pounds every month during the pandemic.

“Students in aquaculture programs at Carteret Community College and Brunswick Community College can observe and get valuable hands-on experience at the facility,” says Herbst. “Some of the field’s most innovative work is happening in our own backyard, and the next generation of fish farmers gets to see it first-hand.”

“There’s nothing like working with the actual fish,” Reading adds.

“Can we speed up the spawning process and make it even more efficient?” he says. “And what about wild striped bass? Can we do this with them?”

Meanwhile, the rest of us already can feast on such delicacies as Southwest striped bass with black bean salsa, striped bass chowder, striped bass tacos with creamy guacamole, or Parmesan-encrusted striped bass — or, for that matter, any of the many other dishes that rely on the succulent fish. For diners enjoying a mouthwatering striped bass entrée, the Reading team’s discovery was always meant to be. 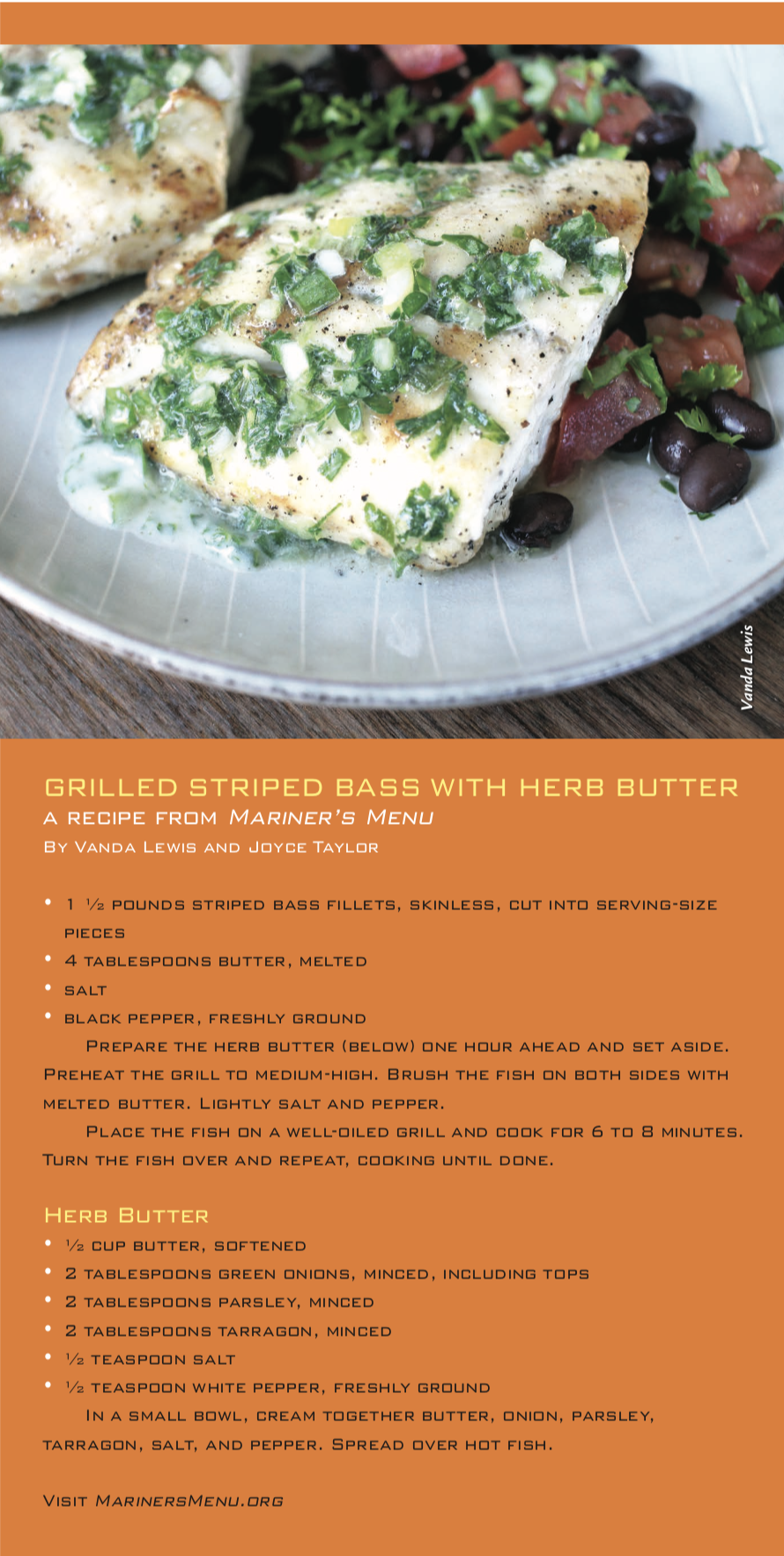 sustainable fisheries and aquaculture in Coastwatch

more about coastal and marine aquaculture