As winners of the 2016 Blue Heron Bowl, students from Walter M. Williams High School in Burlington will face-off against 23 other teams at the National Ocean Sciences Bowl, April 21 to 24 in Morehead City. 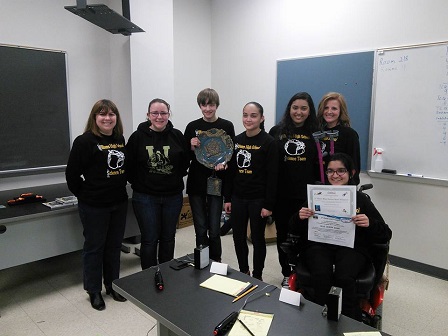 Meet the winners of the 2016 Blue Heron Bowl! These students from Walter M. Williams High School in Burlington (pictured here with their coaches), are heading to the National Ocean Sciences Bowl competition in April. Photo courtesy of the Blue Heron Bowl.

The Blue Heron Bowl is a regional competition of the national program known as NOSB. The N.C. event was held in February in Morehead City. Teams of high-school students from across the state participated in the daylong quiz bowl focusing on all things marine science.

Other schools that took home honors in the 2016 N.C. Blue Heron Bowl competition were:

The winning Williams High team will head to the national competition, which also will be hosted by the Institute of Marine Sciences at Carteret Community College. Many of the Blue Heron Bowl sponsors are also supporting the national event.

NOSB is an academic competition and program to address a national gap in environmental and earth sciences in public education. It introduces high-school students to marine sciences, in preparation for potential STEM careers — in science, technology, engineering and math. Overall, the program also helps them become knowledgeable citizens and environmental stewards.

For information on the national competition, visit nosb.org. To consider volunteering in April, check postings from @UNCims and @NOSBRocks via Twitter.

The University of North Carolina Wilmington will host the 2017 Blue Heron Bowl. For more information on the N.C. competition, go to sites.google.com/site/blueheronbowl/.