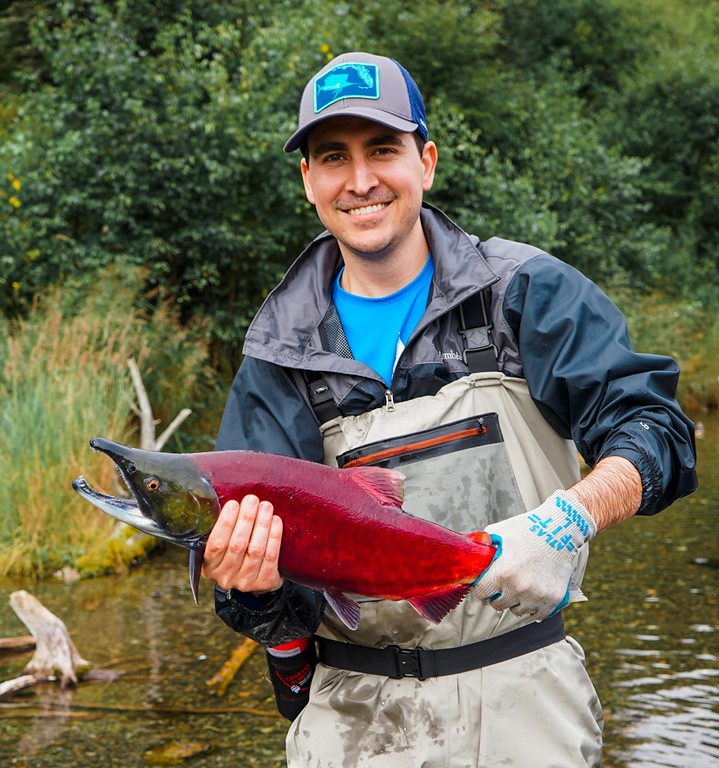 Dan holding a sockeye salmon on assignment in Aleknagik, Alaska.

“We are pleased to have Dan bring his skills and expertise to our team,” notes Susan White, executive director.

DiNicola began his career in marine policy and species conservation before transitioning to science communication with an emphasis on visual storytelling. Now he uses his background to collaborate with researchers to bring the stories behind their science to life.

“I am passionate about being in the field and making complex topics resonate with audiences,” notes DiNicola, who comes to North Carolina by way of the Pacific Northwest, where he was the communications manager for the University of Washington School of Aquatic and Fishery Sciences as well as the marine biology program for four years.

In that role, he transformed the communications for one of the nation’s preeminent fisheries institutions, concentrating on the school’s world-class research and legacy, while also ushering in a new era of marine science at the University by developing recruitment strategies for its nascent undergraduate marine biology program.

Prior to his experience in Seattle, he was the communications specialist at the University of Miami for the Gulf of Mexico Research Initiative-funded grant, RECOVER, which investigated the impacts of the 2010 Deepwater Horizon oil spill on coastal and pelagic fishes. While with RECOVER, he built brand awareness, partnered with private companies to amplify outreach goals and developed a free-to-use virtual lab app with lesson plans focusing on emerging oil spill science for students and teachers.

“I am looking forward to starting the next chapter of my career back on the East Coast,” says DiNicola, a South Florida native who holds a master’s degree from the University of Miami Rosenstiel School of Marine and Atmospheric Science in Marine Affairs and Policy.

In his spare time, he enjoys traveling with his family and two dogs, hiking, photography, and cooking barbecue.