Today, the North Carolina Coastal Federation released the North Carolina Oyster Blueprint for 2021-2025, an action strategy created by more than 50 contributors across the state to advance restoration, protection and harvest of oysters. This is the fourth edition of the Blueprint, which was first issued in 2003. 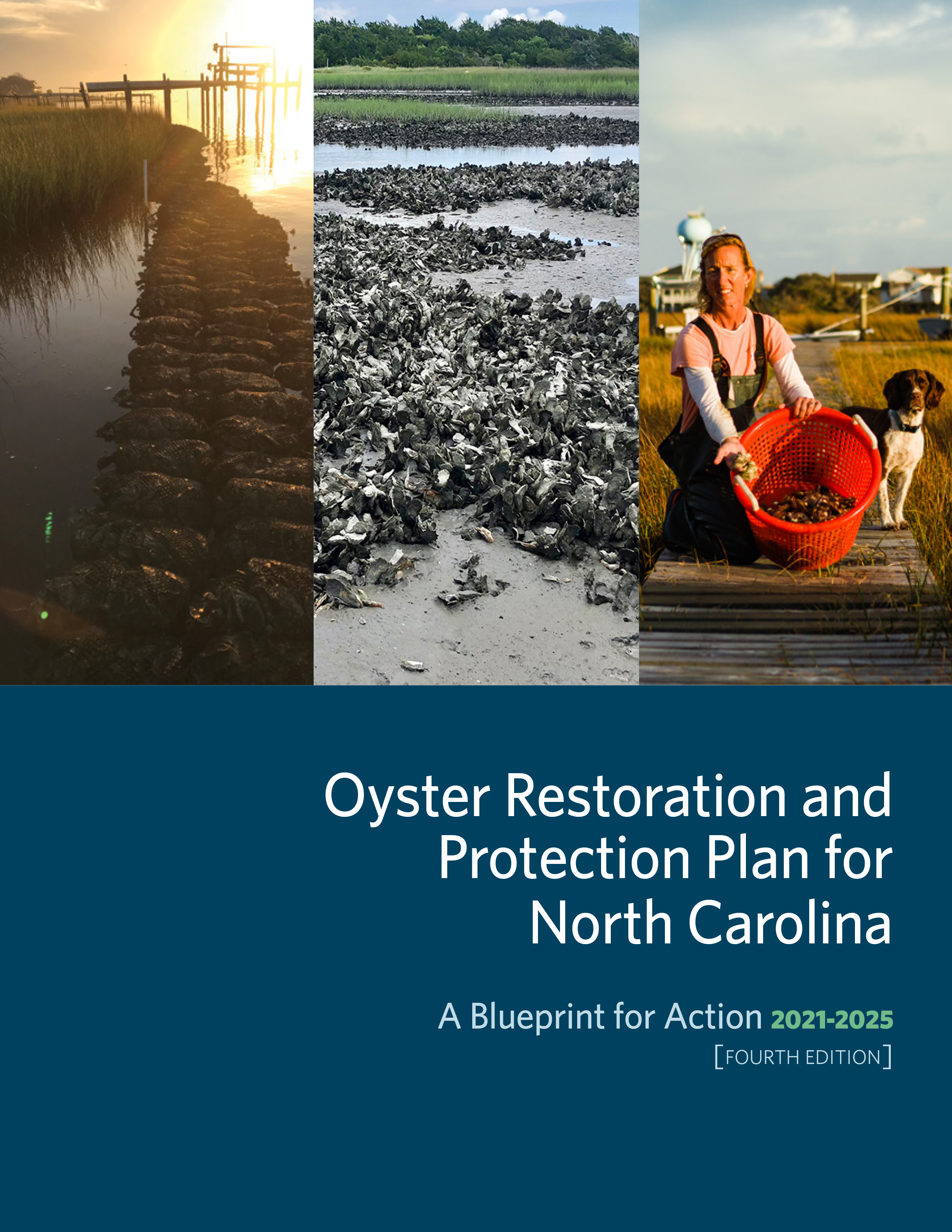 Click the image to read the full-length version of The Blueprint.

“Our ambitious vision for oysters in North Carolina builds on the Oyster Blueprint’s solid foundation of successes, and reflects that forward progress,” said Todd Miller, executive director of the North Carolina Coastal Federation. “I’m especially proud of the commitment, cooperation, and creative thinking the many diverse contributors showed in creating this vital plan, even as COVID-19 added new challenges in the last year.”

North Carolina Sea Grant served as a key partner during development of the new Blueprint, continuing the program’s long history of support and work aligned with past and present versions of blueprints.

Restoring oysters is one of the most promising opportunities for coastal states, offering benefits for water quality, fish habitat and shoreline protection from storms. Restoring wild oyster populations can also increase the commercial oyster harvest and help oyster farmers who grow their own, contributing jobs and healthy, local food to the state.

Wild oyster populations in North Carolina have declined over the last century due to historic over harvest and the subsequent impacts of poor water quality, natural disasters, predation, and disease, mirroring the global loss of an estimated 85 percent of oyster reefs. Although there is no current stock assessment for the wild oyster population in the state, the Division of Marine Fisheries views it as particularly vulnerable to overfishing. 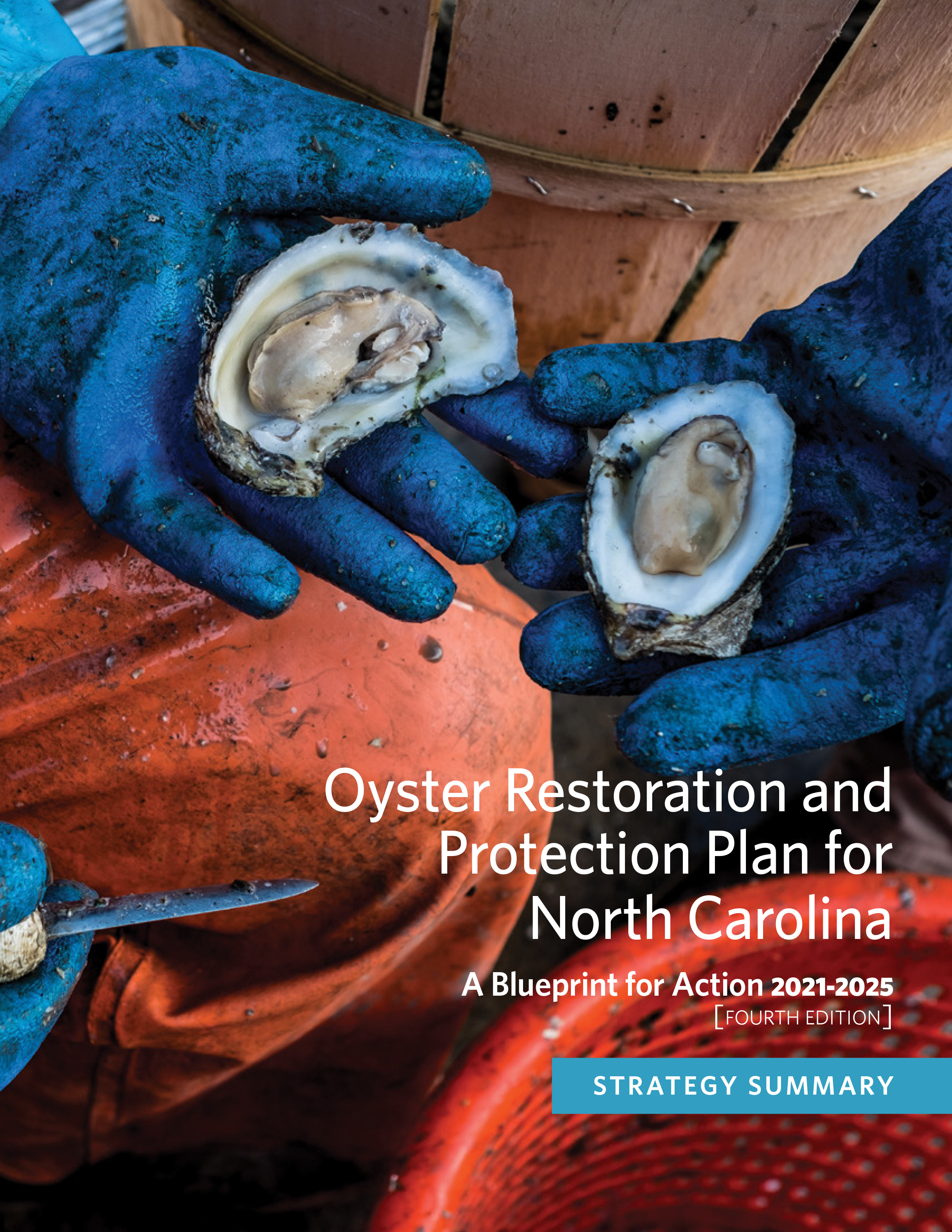 Click the image to read a strategic summary of The Blueprint.

The Oyster Blueprint identifies specific goals for the state and key areas within it to achieve by 2025, including:

“This report reflects the shared vision of many diverse partners,” says Erin Fleckenstein, coastal scientist and regional manager for North Carolina Coastal Federation, and leader of the Oyster Blueprint effort. “One of the great strengths of the Oyster Blueprint is that the very people who together develop this plan are the same ones who will carry it out, with support from state agencies and organizations.”

“The latest version of the Blueprint documents the progress and the potential of the oyster industry in North Carolina,” Sen. Norman Sanderson says. “It’s clear that the investments we have made to help the aquaculture industry are paying off. We need to continue to build on that success to create the jobs shellfish can bring to our coastal communities.”

Previous editions of the Oyster Blueprint have led to important improvements in the state, including:

Many of the actions identified in the Oyster Blueprint are already underway, supported by funding from a combination of sources including state appropriations, state and federal grants, and private foundations. A statewide Oyster Steering committee facilitates and coordinates for the many who help implement the plan.

“We’ve known for some time that oysters can be a big win for our environment and our coastal economy,” Rep. Pat McElraft says. “The Blueprint is a great map for us to follow to build on the success we have already achieved with oysters in North Carolina.”

North Carolinians can support the work of the Blueprint in a variety of ways, including by recycling oyster shell for use in oyster restoration, volunteering with organizations to build new oyster habitat, visiting an Oyster Trail site  to support businesses that promote oysters and tourism experiences, following social media accounts and sharing posts that promote the Blueprint, and participating in the Coastal Federation’s Adopt an Oyster program to support restoration efforts.

For more information or to get involved, please contact Erin Fleckenstein or Leslie Vegas with the North Carolina Coastal Federation: 252 393-8185 or email info@ncoysters.org.

Read the full-length version of The Blueprint.

Read the Strategic Summary of The Blueprint.

More on Coastal and Marine Aquaculture

A Primer on North Carolina’s Seafood

North Carolina’s Sea Grant and Space Grant programs are now accepting applications for a one-year Graduate Research Fellowships. This $10,000 fellowship will be awarded to one fellow, whose work addresses a high-priority research need within North Carolina’s coastal areas, watersheds and nearshore environment. Applications are due April 1.