Eastern North Carolina has many meandering waterways. In North Carolina Sea Grant’s Winter 2016 issue of Coastwatch magazine, Bland and Ann Cary Simpson take readers on a tour of the state’s favorite creeks, streams and rivers in Little Rivers and Waterway Tales: A Carolinian’s Eastern Streams. In a related story, Lundie Spence, former marine education specialist for Sea Grant, shares her thoughts on, and inspiration from, the book. 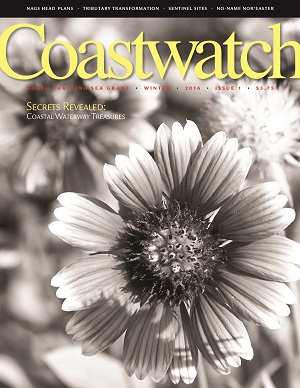 The National Oceanic and Atmospheric Administration’s Sentinel Site Program has formed a network of eyes on the coast. NOAA’s Amanda Phelps offers some background on the network program. Also, hear from the coordinators of the Sentinel Site Cooperatives in North Carolina, Chesapeake Bay, Northern Gulf of Mexico, the Hawaiian Islands and San Francisco Bay.

E-Ching Lee checks in with Sea Grant’s newest graduate students to receive fellowships at the beginning of 2016.

In early 2015, the Town of Nags Head began FOCUS Nags Head, a new planning initiative that will lead to a comprehensive plan and a unified development ordinance for the town. Lisa Schiavinato and Jessica Whitehead explain Sea Grant’s role.

Feel the wrath of a nor’easter in a poem by Cynthia Sharpe, a former Sea Grant communications intern.