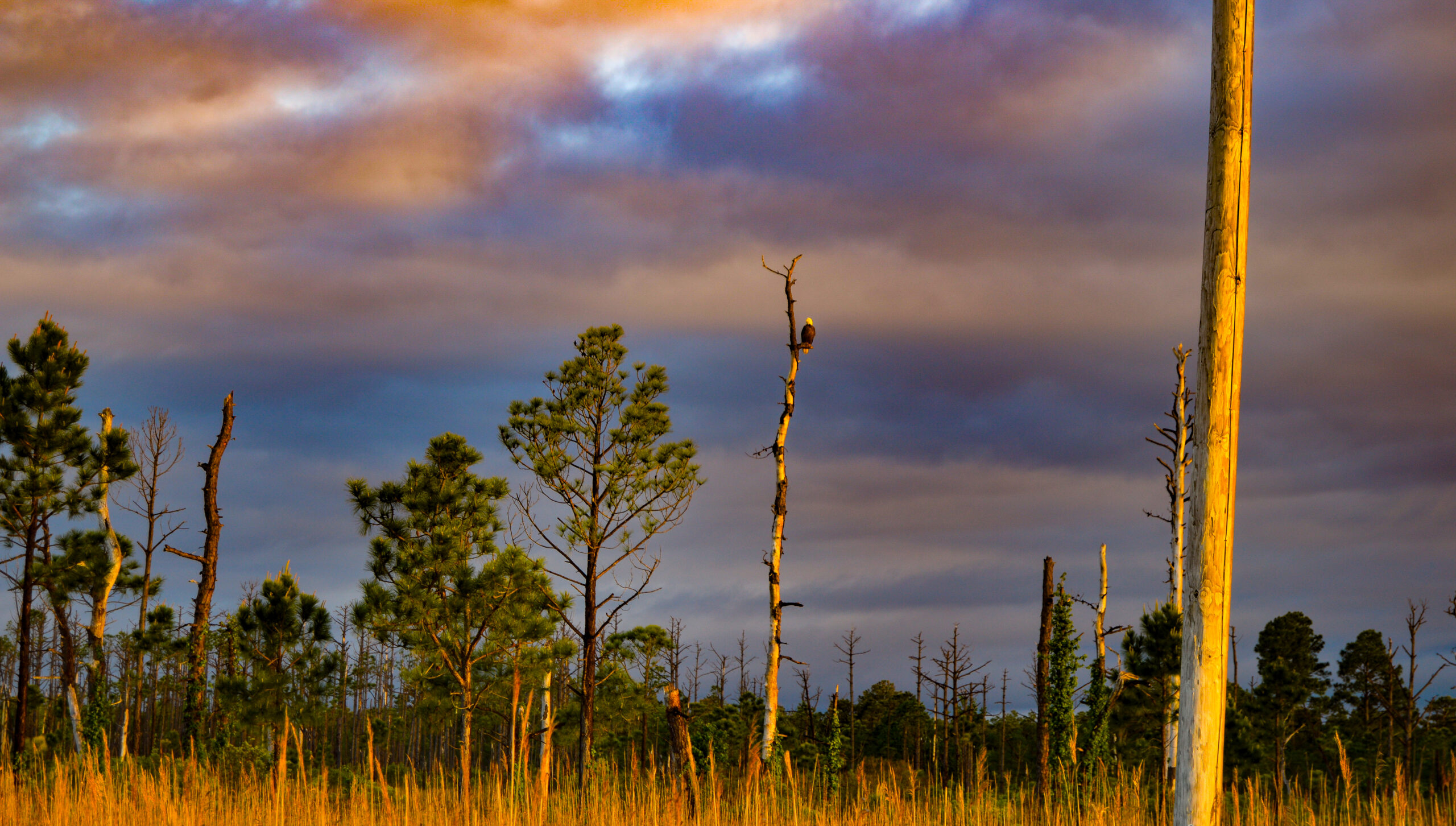 A new study has found the spread of ghost forests across a coastal region of North Carolina may have implications for global warming. Ghost forests are areas where rising seas have killed off freshwater-dependent trees, leaving dead or dying white snags standing in marsh.

The study determined that the transition from forest to marsh along the coastline of the Albemarle-Pamlico Peninsula led to a significant loss in the amount of carbon stored in the plants and trees above ground. When released into the atmosphere as a gas, carbon can contribute to global warming. However, researchers also uncovered some ways landowners can offset some of those carbon losses.

“Many people think about sea-level rise as being more of a long-term threat,” said the study’s lead author Lindsey Smart, a research associate at the North Carolina State University Center for Geospatial Analytics. “But we’re actually seeing significant changes over shorter time periods because of this interaction between gradual sea-level rise and extreme weather events like hurricanes or droughts, which can bring salt water further inland.” 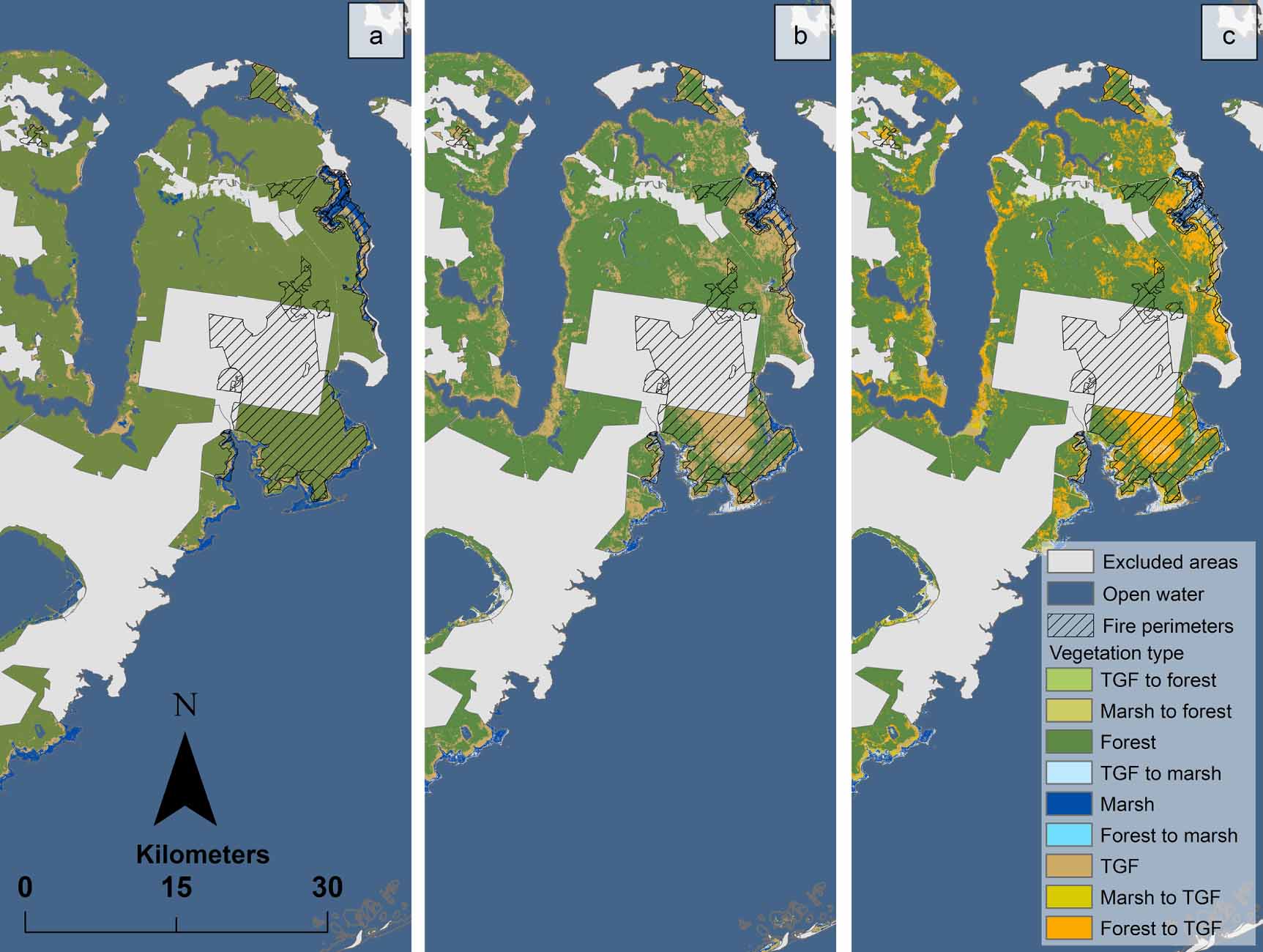 Vegetation has changed on the eastern portion of the Albemarle-Pamlico Peninsula from 2001 (a) to 2014 (b). The right illustration overlays the change (c), with increased areas of tan, yellow, and orange indicating the spread of “transition-ghost forests.”

In the study, researchers tracked the spread of ghost forests across 2,485 square miles on the peninsula. They found that on unmanaged, or natural, land such as publicly owned wildlife areas, ghost forests spread across 15 percent of the area between 2001 and 2014.

Using models created using data on vegetation height and type in the area, they calculated that across the 13 years of the study, 130,000 metric tons of carbon were lost from the spread of ghost forests on unmanaged land.

According to the U.S. Environmental Protection Agency’s Greenhouse Gas Equivalencies Calculator, that’s equivalent to what would be emitted into the air by 102,900 passenger vehicles driven for one year.

“Coastal forests are really unique in that they store carbon both in their foliage, and in their really rich organic soil,” Smart said. “As saltwater intrusion increases, you’re going to see impacts both to the aboveground and the belowground carbon. While we measured aboveground carbon losses, the next step will be to look at the response of these carbon stores below ground to saltwater exposure.”

Researchers said it’s unclear exactly what happens to the carbon released when the forests are killed by salt water, and it could be that it goes into the soil.

While they found ghost forests spread along the peninsula’s coastline, they also saw that the losses at the coast were offset by tree plantings in forests grown for timber during the study.

That was one land-management practice that they found could offset carbon losses due to ghost forest spread. They also saw that the use of canals and drainage ditches had an impact on carbon losses. Canals could either aid saltwater encroachment on the land, or help prevent it, depending on their use.

“Drainage networks, if not maintained, can serve as conduits for saltwater intrusion,” Smart said.

They also reported that catastrophic wildfires likely worsened the spread of ghost forest along the coast and had a greater impact on the loss of aboveground carbon compared with ghost forest spread.

“We think there may be an interaction between salt water and fire that accelerates forest retreat, and facilitates marsh migration into areas that were once healthy coastal forest,” Smart said. 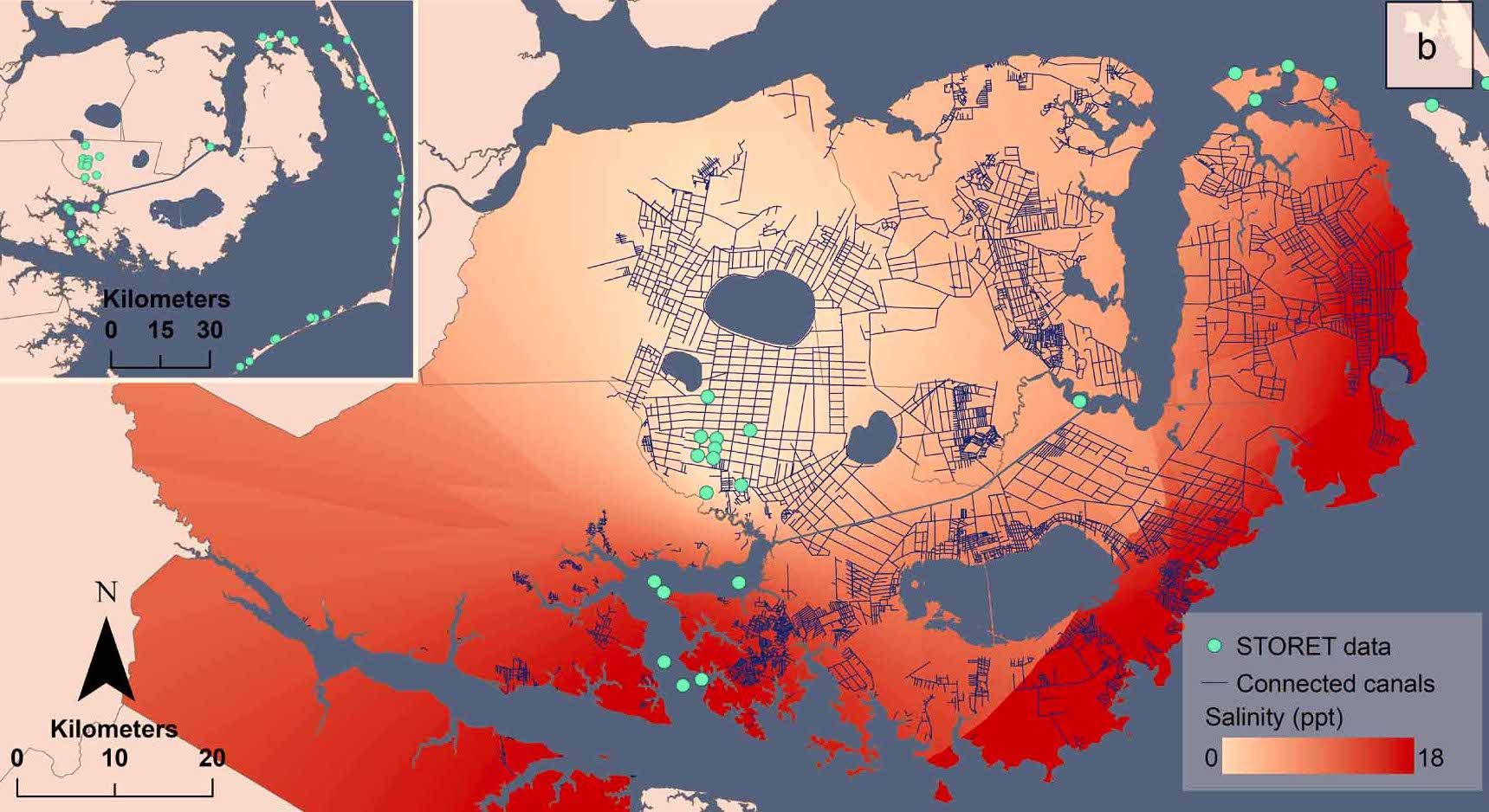 High salinities (deep red) occur along the estuarine shoreline in the east and gradually decrease westward, with increasing distance from the shoreline. High salinities also occur in the southern part of the peninsula, resulting from proximity to the Pamlico Sound, with decreasing salinities northward, closer to the near-freshwater Albemarle Sound.

“Two severe droughts within the study period produced larger-than-typical wildfires and facilitated salinization of normally freshwater ecosystems,” said study co-author Paul Taillie, a postdoctoral researcher at the University of Florida and former graduate student at N.C. State. “Thus the combination of rising sea level and future drought would be expected to cause a large net loss in biomass.”

Overall, the study helps create a map of areas that are particularly vulnerable to sea-level rise, and offers clues to help prevent loss of coastal forests.

“Our paper helps to identify areas that are most vulnerable to the impact of sea-level rise and extreme weather events,” Smart said. “This could help guide land-management decisions and help people think about ways to adapt to these changing environmental conditions.”

adapted from this news release