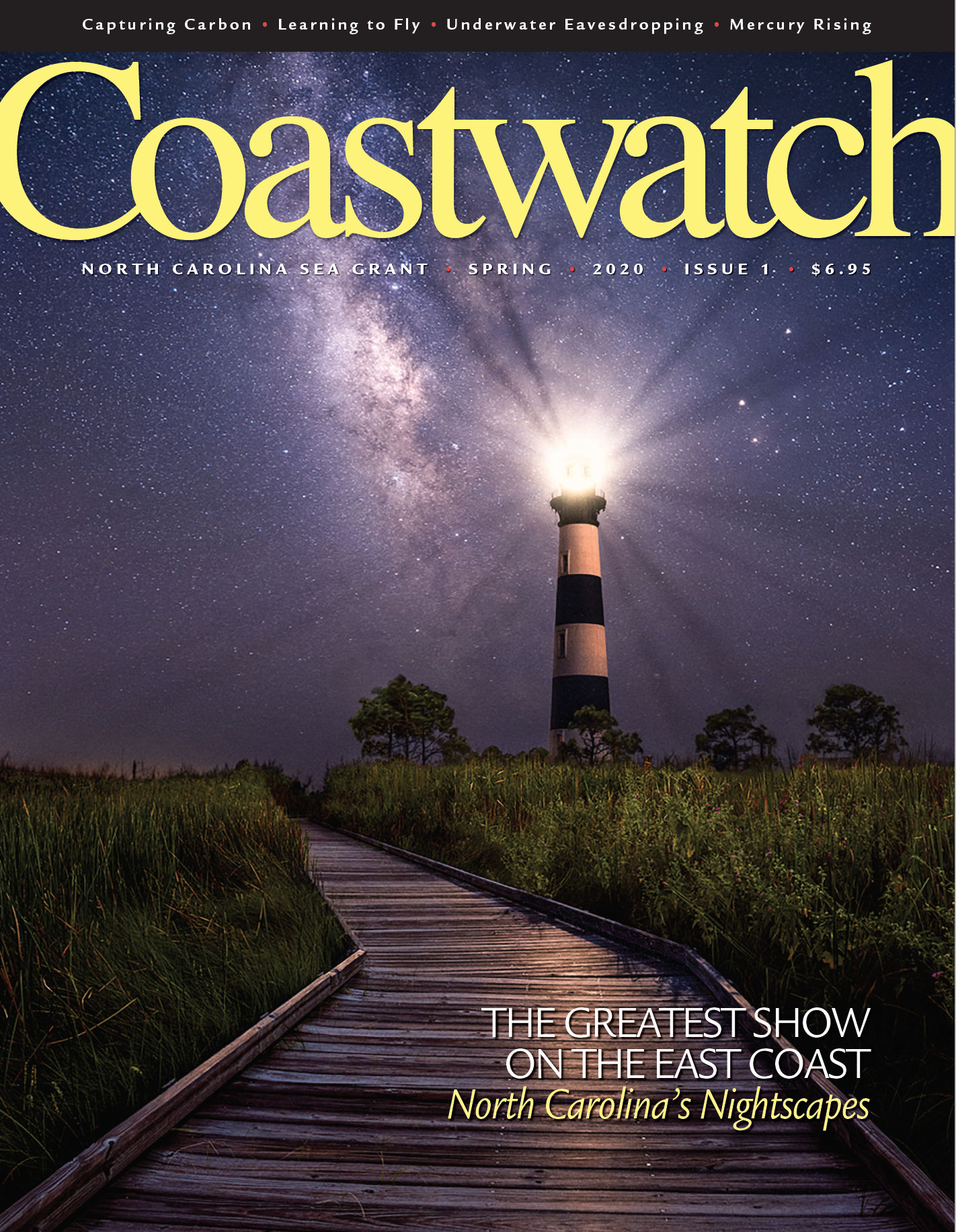 Like a searchlight on premiere night, Bodie Island Lighthouse shines outside North Carolina’s remarkable theater of the dark. Photo by JamieZink/CC-BY-SA 4.0 International.

The award-winning Coastwatch magazine has just released its Spring 2020 issue. The latest edition of the flagship publication from North Carolina Sea Grant covers a broad range of content, including a look at a new project that crisscrossed the Outer Albemarle Peninsula to document some of the darkest skies on the Atlantic seaboard.

“The Greatest Show on the East Coast” tells the story of Stan Riggs and his team as they traveled to 83 observation sites, finding an astronomer’s paradise and a wide array of wildlife across “The Yellowstone of the East.”

In “Capturing the Culprit: Carbon Sequestration and the Battle Against Climate Change,” Sea Grant’s Sarah Spiegler explains how we can take advantage of nature’s own tools for capturing carbon from the atmosphere, and, in doing so, help to slow down global warming.

Larry Tise’s “At the Dawn of Flight” chronicles the Wright Brothers’ earliest encounters with the earthscape and climate of the Outer Banks, where torrential winds, wild ponies, marauding pigs, and an ever-shifting coast all made a perfect lab for learning to fly. The story is from his new book, courtesy of the University of North Carolina Press.

Is coastal landscaping an up and coming sector of the “Blue Economy”? Sea Grant’s Jane Harrison explains how landscape architects and contractors are using native plants more often — and how consumer interest also has increased.

As modes of teaching and learning quickly shift to adapt to new urgencies around COVID-19, this issue of Coastwatch also features one of North Carolina Sea Grant’s Mariculture Lesson Plans. “Zoom In on Aquaculture” includes engaging activities and multimedia resources.

The Spring 2020 edition of Coastwatch also looks at new science from the next generation of researchers. Olivia Caretti eavesdrops on the underwater conversations of fish, and Yener Ulus tells what happened when he sampled wetlands for mercury, even while Hurricane Dorian was heading for the coast and local towns were evacuating.

Last, in “Mariner’s Menu,” Vanda Lewis has supplied readers with “Springtime Sensations,” four recipes from Joyce Taylor that are made for warmer weather.

North Carolina Sea Grant has published Coastwatch for four decades. The magazine has won the most recent award from N.C. Association of Government Information Officers for best print publication, as well as numerous other honors. Among these, science editor Julie Leibach earned the award for best feature story in 2018 and 2019.

Please note that the Spring 2020 issue of Coastwatch went to press before responses to COVID-19 quickly escalated over the last few days. As such, it does not take into account the current public health crisis.

Read it in print: go.ncsu.edu/Subscribe-Now. North Carolina Sea Grant is unable to provide sample copies or to fill orders for single issues at this time. New subscriptions will start with the Summer 2020 issue.