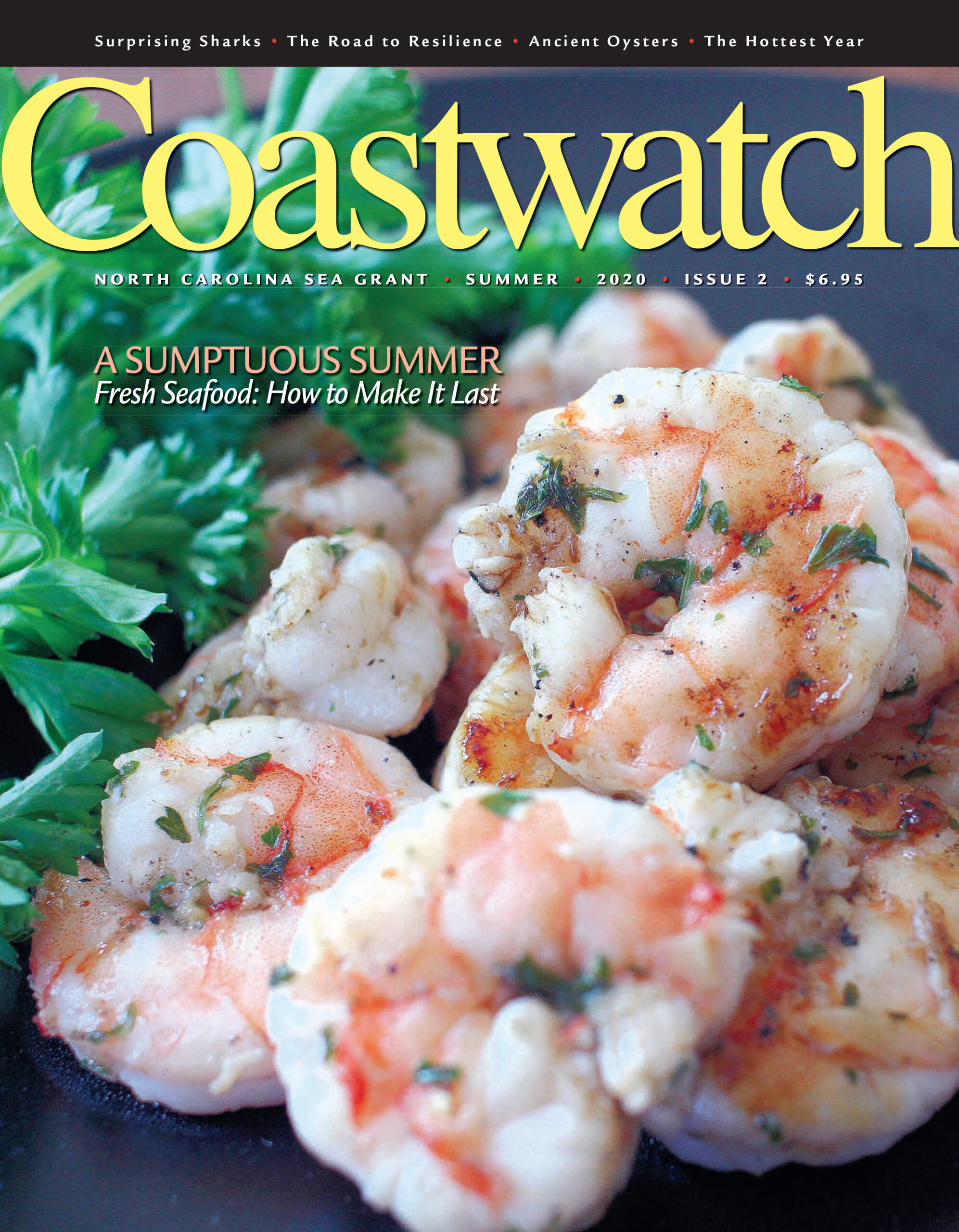 The award-winning Coastwatch magazine has just released its Summer 2020 issue. The latest edition of the flagship publication from North Carolina Sea Grant covers a broad range of content, including a look at climate predictions for the state, as well as new longterm strategies for adapting eastern N.C. roads and bridges in the face of increased flooding.

The cover story offers lighter fare: tips and techniques for freezing seafood that also keep it fresh. Many consumers have adjusted to the COVID-19 pandemic by making fewer trips to seafood markets, and North Carolina seafood specialists Barry Nash and Vanda Lewis explain how to preserve the taste of finish and shellfish.

In “The Road to Resilience,” the award-winning science writer Julie Leibach tells why thoughtful planning and targeted route improvements are critical to finding transportation solutions for flooding in the eastern part of the state.

In addition to flooding in North Carolina, scientists also expect the state will experience more wildfires, less snowfall, and more severe droughts. The North Carolina State Climate Office’s Corey Davis and Kathie Dello explore how 2019 became the state’s hottest year on record and what that means for the state looking ahead.

Evan Ferguson, a teacher at Cape Hatteras Secondary School of Coastal Studies, says 95% of Hatteras Island students believe in climate change, and most plan to leave the island. She reveals what her students found when they surveyed their own classmates on climate change.

In “What’s in Your Water?” Riley Mulhern, a joint fellow with North Sea Grant and the N.C. Water Resources Research Institute, discusses his new model for predicting households and locations with a higher chance of lead contamination. Mulhern has been working to make drinking water safe from Bolivia to backyard wells in North Carolina.

Our Sea Science feature dives into a dozen facts about sharks that might surprise most people, including how flipping a shark upside down can put it in a trancelike state. Then, contributing editor Katelyn Vause explains how the fossil record of ancient oysters suggests ways to protect the modern-day species.

The summer 2020 issue closes with something for all anglers in Hook, Line & Science, from blacktip sharks to historic dock photos to combatting the catfish invasion with “hand-crank electrofishing.”

Every year, over 100,000 people read Coastwatch online and in print.

In print: go.ncsu.edu/Subscribe-Now. New subscriptions will start with the Fall 2020 issue. (North Carolina Sea Grant is unable to provide sample copies or to fill orders for single issues at this time.)