The National Sea Grant Communicators network singled out Coastwatch magazine for recognition during a virtual celebration of the network’s biannual Excellence in Communication Award. The magazine was the sole periodical from 34 Sea Grant programs across the country that judges named among the three finalists for the award. 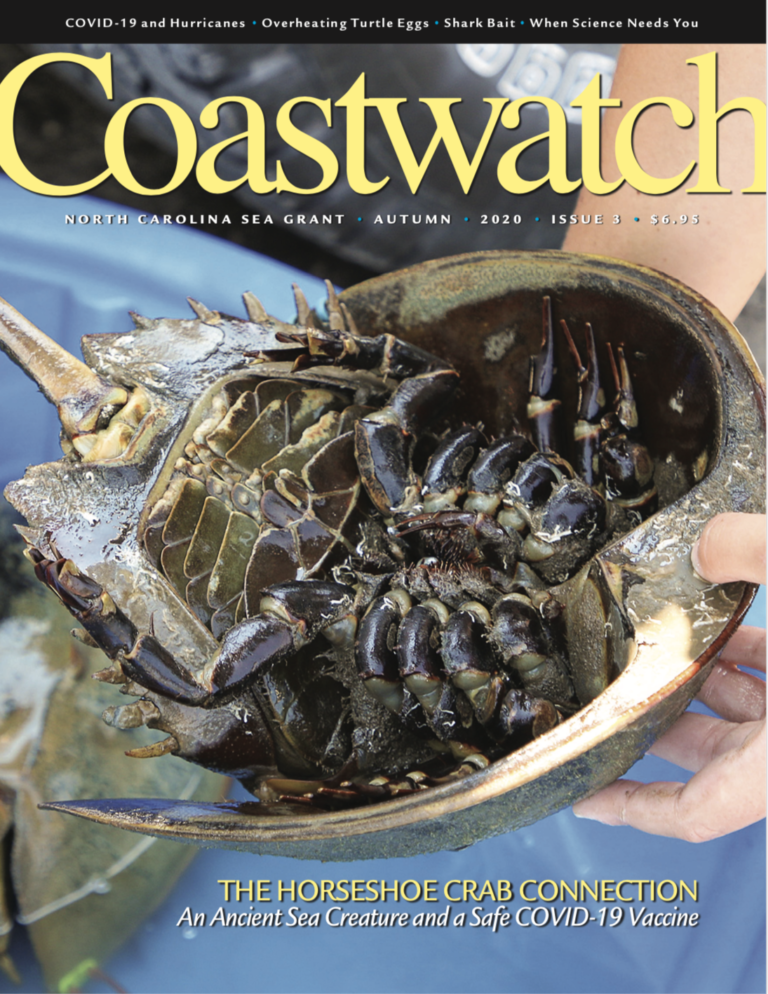 It was the seventh honor of the last two years for Coastwatch, during which time print and online readership of North Carolina Sea Grant’s flagship publication has climbed to 170,000 people annually.

“Coastwatch sits at the intersection of cutting-edge science and real-world solutions,” says editor Dave Shaw. “The magazine thrives because of North Carolina Sea Grant’s people and projects. Thanks to Sea Grant’s team and resources, and an audience eager to read our stories, we can reach more and more people.”

Shaw says that for the last two decades, North Carolina Sea Grant’s communication director, Katie Mosher, shepherded the magazine through its critical transition from a print-only periodical to a hybrid print-and-online publication.

“Coastwatch has established a massive online archive of free material,” Shaw says. “Today, readers can search the magazine by issue, by subject, and by what’s most popular — and tens of thousands of people access this content every year.”

One of the award’s judges noted the magazine’s strength both in print and online: “What I found really inspiring about that was the way they have adapted their already very well-done magazine to also excel in a digital format, with attractively laid-out articles and an enticing landing page.”

Recent issues of the magazine have offered signature features on climate change, the connection between horseshoe crabs and a COVID-19 vaccine, and how the Outer Albemarle Penninsula’s striking dark skies and wildlife have evoked awe for “The Yellowstone of the East.” Over the last two years, guest authors have included renowned historian Malinda Maynor Lowery, distinguished scientists Stan Riggs and Hans Paerl, and the award-winning chef Ricky Moore.

Earlier this year, Coastwatch won a 2020 APEX Award of Excellence in print publications. In 2019, the N.C. Association of Government Information Officers (NCGAIO) also awarded the magazine Best Print Publication, after naming it runner-up in the same category in 2018.

To read the new Autumn issue of Coastwatch or to browse the archives, visit NCCoastwatch.org

Read about how Jane Harrison received the Sea Grant Association’s President’s Award for her national work on diversity, equity, and inclusion.

StriperHub to Receive Over $1.4 Million in Funding to Grow Striped Bass Aquaculture Program

The StriperHub team lead by NC Sea Grant and NC State University will expand its striped bass aquaculture research and outreach with $1.4 million in additional funding.