And Sharing the Wealth 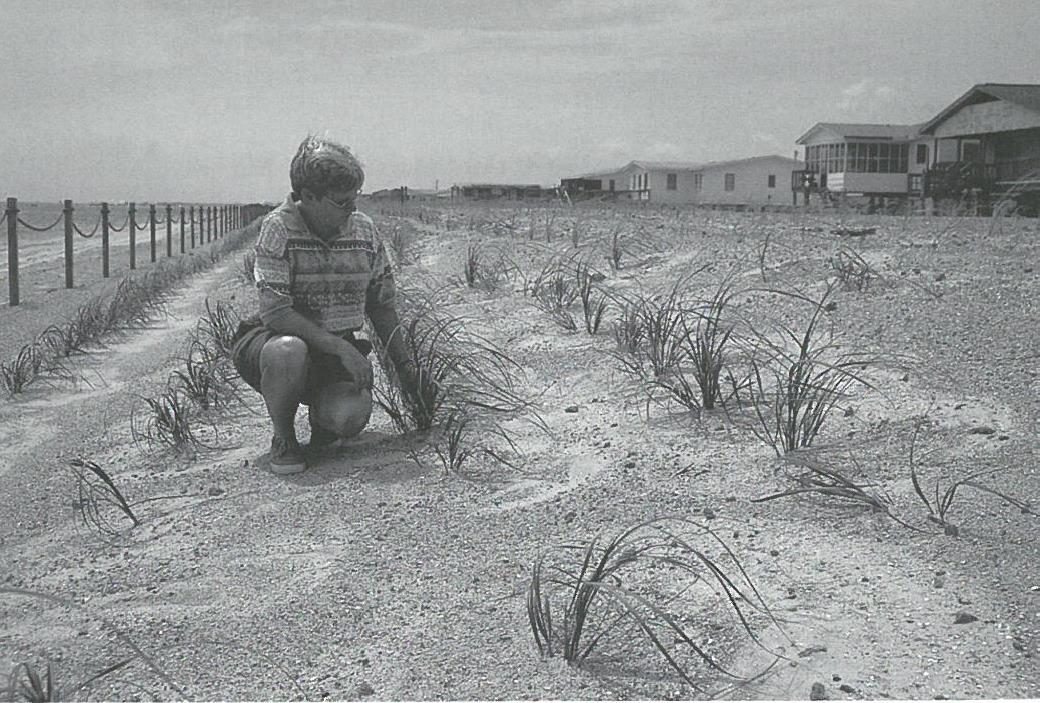 The U.S. Army Corps of Engineers could leave nothing to chance in implementing its ambitious plan to deepen, widen and straighten the Cape Fear River navigation channel— 37 miles from the ocean to the port.

No small matter: What to do with the 27 million cubic yards of material to be removed from the channel’s bottom, shoals and ocean bars.

“Core samples from every grid of the project map were taken for identification and testing. We had to determine where every scow filled with dredged material would go,” explains Penny Schmitt, Corps spokesperson.

Most of the dredged rock and silt will be earmarked for disposal sites — islands of evidence of the Corps’ mission to maintain navigable shipping lanes, harbors and waterways.

It’s clear that a deep-water port will attract a larger share of the global shipping trade. For nearby communities, though, the project will yield an important by-product — beach quality sand. The gold standard of oceanfront towns whose economies rely on the tourist trade.

The state requires that beach-quality sand from navigation projects be used to replenish beaches “in the most logical, cost-effective area.” Towns beyond that designation may participate if they pay to move the sand the extra distance.

Spencer Rogers, North Carolina Sea Grant coastal erosion specialist, sees this policy as a responsible interest by the state and the Corps to keep the sand in the beach system. Some states dump sand from navigation projects into the open ocean, removing it from the natural system.

“It’s a matter of simple conservation of the limited sand resource,” he says.

Waves slap the bottom of the flat-bottom boat as Gilbert Powell heads towards Frying Pan Shoals. The ride offers a turtle-eye view of three-and-a-half miles of beach-building on Bald Head Island — the first to receive a share of sand from the port-deepening project.

Powell, the executive director of the Bald Head Island Conservancy, says the sand is a major boost for the Sea Turtle Protection Program. For nearly a decade, the conservancy has coordinated the program with the N.C. Wildlife Resources Commission and the National Marine Fisheries Service.

Usually between 110 and 120 nests, mostly loggerheads, are documented during the May through November nesting season. The number dropped by nearly half in 2000, Powell notes. “We may have been at the low end of a natural cycle,” he says.

Heading back to the marina, Powell makes a mental note to talk with the project chief about a section of the beach where high tide has sculpted an escarpment into the new sand that could be a barrier for a nesting turtle.

He explains that researchers are studying impacts of pumping 1.5 million cubic yards of sand onto this stretch of Bald Head’s 10-mile oceanfront beach.

Some opponents of beach replenishment fear that pumping could bury the food supply of shore birds and inshore fish. If so, what is the recovery rate? Or, as Powell surmises, could the dredge pull sufficient critters from offshore to offset the loss?

By most predictions, the delayed sand-pumping schedule should have discouraged sea turtles from coming ashore this season at Bald Head. But even as sand pumping was winding down in mid-July instead of mid-May as planned — it appeared the nesting count could reach a near-normal range.

By mid-August, the summer interns counted 75 nesting sites. Under the direction of the island naturalist, Julia Byrd, the conservancy funds four interns to conduct the Turtle Protection Program from May through August. The Class of 2001 interns are college students, including one from England, majoring in marine sciences.

Byrd says their dedication is especially important this season. The nightshift, from dusk until dawn, means patrolling every foot of oceanfront beach in 45-minute intervals. Nesting female turtles are examined, measured and tagged to provide scientific data for ongoing sea turtle research.

The interns stand watch as the turtle deposits and buries about 120 eggs before returning, exhausted, to the sea.

In previous years, the interns relocated few nests from harm’s way – on beach sections prone to overwash or below the tide line. But this year, all nesting sites are considered at-risk because of the heavy equipment spreading the dredged sand along the beachfront.

Relocating nests to the more protective base of dunes is an involved business. The interns place sand from the original nest — still wet with the mother’s mucus — at the bottom of the newly created nest. Eggs are placed with the same orientation and in the same sequence they were deposited. Global Positioning System data is recorded for the nest. And, finally, a wire mesh cage is placed around the nest to keep it from being disturbed by raccoons, foxes and humans.

Environmental educator Allison Sill believes good information is the best protection for nesting sea turtles — and all aspects of the unique Bald Head Island environment. Few residents or visitors leave the island without knowing that it is a turtle sanctuary. And few would dream of disturbing a turtle, nest or hatchlings they may encounter on the beach. Islanders also know that litter blown into the ocean can be mistaken by sea turtles as food — with fatal consequences.

“The conservancy works to make certain that no one takes our resources for granted,” he says — and that includes the bounty of sand that is helping to restore the island’s beaches and turtle sanctuary.

To Oak Island Mayor Joan Altman, the giant dredge off the coast of the wind-swept barrier island is a beautiful sight.

It’s poised to deliver a share of wealth onto the town’s storm-scarred oceanfront beaches. It promises renewal for the beach community that was “ground zero” for Hurricane Floyd in 1999. Many homes and businesses were destroyed; dunes and beach sand were transported across the beach roads into soundside marshes.

There can be little doubt that Oak Islanders put a high value on sand: After Floyd, a massive sand recovery effort was put into motion. Town crews retrieved, sifted and transported about 125,000 cubic yards of sand back to the beach and dune line.

So, it’s a safe bet citizens will treasure their allotted 2.5 million cubic yards of sand from the port project. The Corps will spread the windfall over nine miles of sand-starved beaches. The project will raise the beach profile, but will not build dunes.

“This is a different sort of project from what we have seen before at other beaches,” explains Rogers. Previous beach replenishment projects, such as at Wrightsville Beach, were designed for hurricane protection and included dune construction.

Still, the sand from the channel project is a windfall for the beach communities. The volume of sand and the width of the beach can buy time against the natural rate of erosion and offer some degree of storm protection, he says. Wide, sandy beaches absorb wave energy.

According to Tina Pritchard, director of Oak Island Parks and Recreation, the harbor sand placement will flank the just-completed Sea Turtle Habitat Restoration Project. Under Corps direction, about 2.6 million cubic yards of sand were piped from the Yellow Banks dredge disposal site onto the habitat.

“Before the project was complete, very little turtle nesting habitat remained,” Pritchard says. “The loss of dunes and sandy beach to erosion over the past two decades had placed sea turtles in jeopardy. Coming ashore to nest, they crawled inland in search of a suitable site — only to be exposed to passing vehicles.”

The new habitat covers 27 acres, spanning about 1.7 miles of beachfront between 16th Place and 63rd Street — precisely the neighborhood that well-kept records indicate sea turtles have preferred over the years.

“In fact, some return to the exact same house address time after time,” Pritchard notes.

“The restored acres of nesting habitat will mean that no adult or hatchling will find death on the road. For the program, it’s the difference between preservation and rescue,” says Altman, a volunteer with the town’s turtle watch program.

As of mid-August, 40 loggerheads and one leather-back have nested at Oak Island. Last year 75 turtles came ashore — a low- cycle year for the island. Nests are documented as part of the state and national research program, and “marked” with an electronic transponder. Volunteers monitor nesting sites and record successful hatchings.

The Point, a public access recreational/educational spot at the south end of the beach road, is the best place to see “success.” Visitors take the boardwalk through a seaside nature trail and view a 10-acre constructed dune field, complete with a variety of town-grown beach plants.

It’s also where the town harvests seeds from sea oats planted to anchor the dunes and beach sand. One hundred pounds of seed heads yield 22 pounds of seed.

A pilot project by Russ Morrison, chairman of the town’s erosion control committee, has turned into a full-time propagation operation in a town-owned greenhouse.

With the help of David Nash, Brunswick County Cooperative Extension agent, a float germination system — similar to what is used for raising tobacco — was established to raise sea oats and other dune-building beach plants. American beach grass, marsh cord grass, beach pea and bitter panicum are being cultivated with great success.

Nash praises the “town spirit” that spurred the innovative, cost-saving and sand-saving plant program. Volunteers and town employees have planted nearly 200,000 plants at public beach access points, dunes and other town-owned property. Thousands more were harvested and planted on the turtle habitat and its constructed dunes. More plants are being nurtured along to help stabilize the new port sand placement.

“The beach is a public trust, the only right thing to do is to preserve it,” Nash says.