When Alvin Braswell spotted a river frog along the edge of North Carolina’s Lumber River in 1974, he didn’t know that he had found a rare amphibian — the last river frog ever seen in the state.

“There was no indication that there was a population problem with this frog,” says Braswell, research laboratory director at the North Carolina Museum of Natural Sciences in Raleigh. “We don’t know what happened to the river frog.” 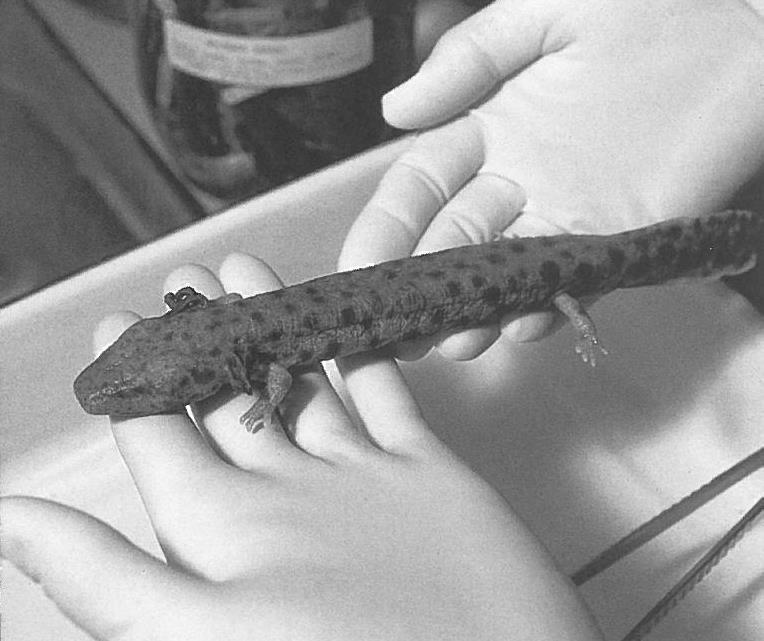 Researchers and teachers can view salamanders now rare in the world. Photo by Ken Taylor.

But thanks to Braswell’s keen eye for identifying amphibians, scientists, teachers and others can view a specimen of the river frog in the museum’s laboratory.

Located in a modern building on Reedy Creek Road, the lab houses thousands of specimens and skeletons of fish, amphibians, reptiles and invertebrates — from a water snake found in 1890 to a needle fish recovered in Carteret County in 1999. The lab, which is open only by appointment, also stores a small collection of bird and mammal specimens, including the vertebrae of a whale.

Most of the specimens are stored in jars of ethyl alcohol along gray shelves in dimly lit rooms. The larger ones are kept in tanks on the floor.

“Specimens are important because they tell us a lot about habitats in the state and the past and present status of a species,” says Braswell.

For example, he says one species — the Neuse River water dog — is a permanent aquatic salamander that lives only in the Neuse and Tar river basins.

“The water dog has high oxygen requirements and only survives in flowing water,” he says. “Surveys indicate that the Neuse River water dog is absent from areas where there are water quality problems. Areas below waste treatment plants in Raleigh and Rocky Mount didn’t have any water dogs.”

The disappearance of the Carolina gopher frog in New Hanover County also reflects environmental changes in the state.

Braswell says that the marble salamander, spotted salamander, chorus frog and gray tree frog that breed in ephemeral wetlands — shallow, temporary ponds that fill with water in the mid- to late-winter and dry up later — have been seriously depleted in urban areas like New Hanover, Wake, Durham, Orange and Mecklenberg counties.

“Many ephemeral ponds in the flood plains have been disrupted by increased hard surfaces and development,” he says.

Donated Specimens by the Thousand

The museum collects its specimens from a variety of sources, including university researchers, federal and state agencies, private citizens and museum staff.

In the early 1990s, Duke University gave more than 30,000 specimens of reptiles, fresh water fish and amphibians. Seven years later, Frank Schwartz from the UNC Institute of Marine Sciences in Morehead City gave over 500,000 aquatic specimens to the museum.

Although the museum doesn’t put a monetary value on specimens, Braswell says Schwartz’s marine collection is quite valuable. “Specimens are irreplaceable if a site has disappeared,” he says.

Schwartz’s collection includes a jar of shark vertebrae found in 1986 at Shallotte. “These are from 15 female and eight male sharks,” says Braswell.

The museum also has a backlog of material collected from stream surveys conducted by the N.C. Wildlife Commission in the 1960s.

“These specimens give us comparative information,” says Braswell. “You can go back to the stream now and find out what happened to certain species.”

Scientists, policy makers and educators rely on the museum’s collection and data for many purposes — from assessing pollutant levels at specific localities to biodiversity research.

“I had tremendous cooperation from the research lab on the identification of some of the fossil bivalves and ostracods that we are finding in an Amazon research project with teachers,” says Lundie Spence, North Carolina Sea Grant marine education specialist. “These researchers are a wealth of information on many levels.”

The museum’s collection dates back to 1890 when two brothers — museum director H.H. Brimley and entomologist C.S. Brimley — wanted a place to showcase some of their skins and specimens.

“H.H. was into alligators and whales and brought the big mammals,” says Braswell. “C.S. was into amphibians and reptiles and was responsible for early collections at the museum.”

For many years, the specimens were housed in the basement of the old N.C. Museum of Natural Sciences in downtown Raleigh.

In 1998, most of the collection was moved to the new Reedy Creek facility with labs and large storage areas. The skeletons and skins of mammals and birds remain in the downtown facility as well as the rock, mineral and fossil collection.

To protect the specimens from ultraviolet damage, each storage room has ultraviolet shields on the lights. The areas are kept at 68 degrees.

“We couldn’t stay downtown because of the large amount of alcohol — a potential hazard,” says Braswell. “With many thousands of gallons of alcohol, we have to follow industrial standards. To move into the new museum would have been prohibitively expensive.”

The museum’s collection is separated into three areas — fish, aquatic invertebrates and amphibians, reptiles and small mammals and birds.

“I call it a morgue because it is full of preserved bodies,” says Wayne Starnes, the museum’s fish curator.

The largest collection includes more than a million fish specimens. “We have the fifth-largest regional collection of fish in the United States,” says Starnes. We have a lot of freshwater species from the mid-Atlantic region and a lot of marine fishes from the western Atlantic.”

The fish specimens are arranged on shelves in phylogenetic order from the most primitive species to the most advanced.

“Our collections are like a library,” says Braswell. “We have all the species filed so we can find them. We have data on the specimens on computer files and backup data off-site. The collection and data are permanent. For hundreds of years, the specimens can be used as a research tool.”

The primitive fish include a lamprey that migrates up fresh streams to reproduce, as well as a big jar of shark jaws found off Cape Lookout.

On the floor, a large tank houses big shark, swordfish and grouper.

Moving down the shelves to the more advanced species, there is a jar of baby needle fish found by a research vessel in 1957. Near this is a large jar of flying fish found on the North River in 1986.

The collection also includes the robust redhorse — a freshwater fish found in the coastal plain and the piedmont. “The redhorse has been looked for a lot in the last 15 years, and we have found only two specimens,” says Starnes. 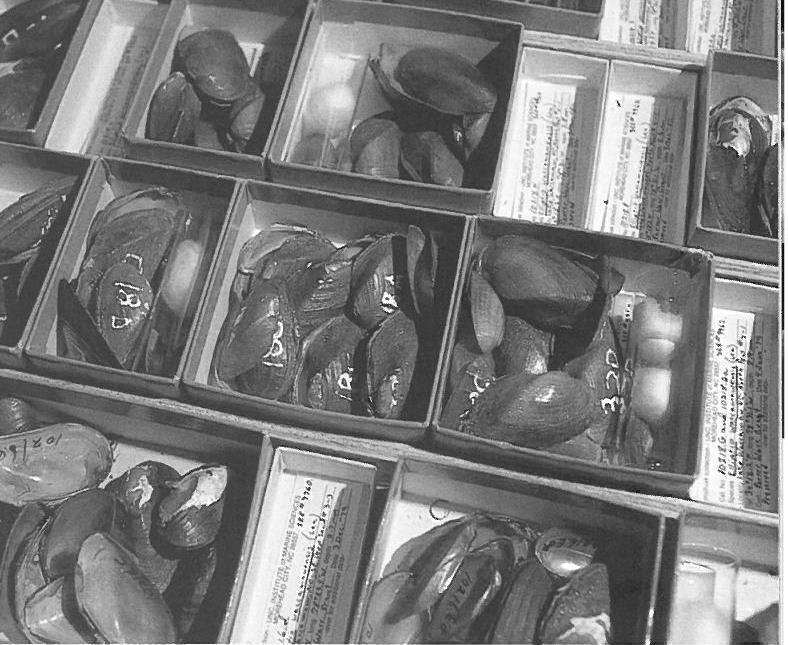 In the next room, freshwater and marine invertebrates crowd the shelves.

In the freshwater section, there are about 175 species of bivalves, including freshwater clams found in all 17 river basins in North Carolina, and crayfish.

“Freshwater clams are the most endangered species in North America,” says Arthur Bogan, the museum’s curator of aquatic invertebrates. “We have already lost about 32 species in North America. Since the clams live in rivers and streams, many of their habitats have been destroyed. Dams and pollution have caused most of the problems.”

Bogan says freshwater clams are unique because of their strong ties to fish. Each mussel larvae attaches itself to a specific species of fish, including minnows, darters, bass and some catfish.

To find out more about freshwater clams, Bogan is studying several species from Southeast Asia. “There are some clams in China that appear to be closely related to clams in North America,” he says.

The mollusk collection includes wet and dry specimens. A small scotch bonnet seashell — which is the state seashell — sits on a shelf near a jar of scallops.

Moving into the next area, Braswell is like a walking encyclopaedia on different species of salamanders.

As a herpetologist, Braswell has done extensive research on the Neuse River water dog and other amphibians. 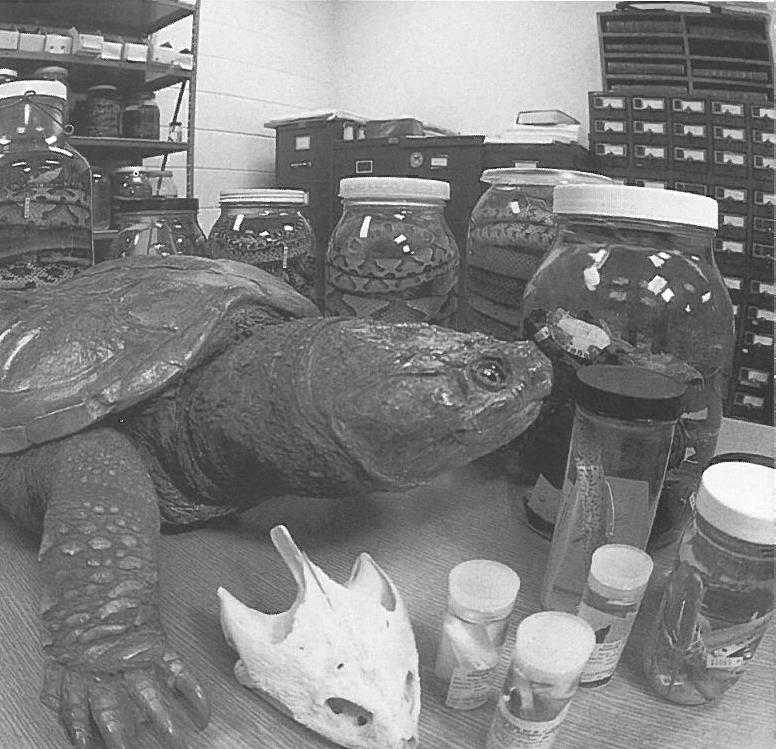 A 40-pound, brown snapping turtle has been a museum display item. Photo by Ken Taylor.

In the primitive section of salamanders, the Neuse River water dog collection includes specimens, eggs, skeletons and even stomach contents. “For each species, we try to document the different life stages,” says Braswell.

As the salamander becomes more genetically advanced, you see a jar with a congo eel that can grow to be three feet in length.

In the shelves filled with frog specimens, there are many varieties of species — from a toad frog to the tree frog.

As we approach the small oak toad that breeds in ephemeral ponds in piney woods, Braswell makes a “peep, peep” sound that echoes across the room. “The small toad’s call is like a baby chicken,” he says.

Because turtles can get quite large, many of these specimens are housed in big tanks filled with alcohol. As Braswell opens one tank, you see a female turtle with a beige shell lying on top of another turtle’s green head.

In the next tank, several Kemp’s ridley sea turtles — which are on the state’s endangered list — are floating in alcohol. On a nearby shelf, a 40-pound, mounted, brown snapping turtle that was on display at the museum for years dominates the area.

“Arsenic was used in the mount for the turtle to keep off the bugs,” says Braswell.

A skull of a large alligator recovered in 1927 from Camp LeJeune also catches your attention. “This is an example of a species that has responded well to being protected,” he says. “They were in trouble and put on the endangered list. Now, they have recovered to the point that commercial harvest of alligators is allowed in some states but not in North Carolina.”

A few feet away are wet bird and mammal specimens, including a jar of red bats that live in hollow trees in the coastal plain and piedmont.

“Around the country, there are not many wet birds and mammals in museum collections,” says Braswell. “You mostly find skins. Our wet collection will be increasing.”

As we move to snakes, Braswell says that North Carolina has over 37 species, including poisonous and nonpoisonous.

“Most of our snakes aren’t primitive,” says Braswell while pointing to a rubber boa from Oregon. “Primitive snakes live in tropical climates. Most of North Carolina’s snakes are in the modern group, including rattlesnakes that are highly evolved genetically.”

“I have examined over 1,000 rat snakes,” he says. “They get in people’s attics and shed skins. They can get up to six or seven feet long.”

As he picks up a jar of coachwhip, he relates an old wive’s tale.

“The name brings wild stories,” he says. “The tail has a scaled pattern that looks like a coach whip.”

In the poisonous section, there are six species from North Carolina, including the copperhead, cottomouth, timber rattlesnake, eastern diamondback rattlesnake, pigmy rattlesnake and coral snake. All six are found in the coastal plain.

The coral snake and the eastern diamondback rattler are the state’s only poisonous species considered by biologists to be endangered.

The most recent sighting of a coral snake was last fall at Carolina Beach State Park. A park official saw a snake that had been run over and sent it to the museum, according to Braswell.

Despite Braswell’s fascination with slithery creatures, he never picks up a poisonous snake unless he must.

“I have worked with venomous snakes for years and never been bitten by one,” he says. “I only handle poisonous snakes when there is no other way.”

While showing the snakes, Braswell never misses an opportunity to relate their value to the environment.

“All snakes are part of their community structure,” he says. “Some feed on critters we consider pests, while others give us insight on how natural systems work. Snakes give us excitement, beauty, knowledge and even contribute to medical research and cures for human ailments.”

This article was published in the Early Summer 2001 issue of Coastwatch.