Travelers can exchange miles for smiles along North Carolina’s back roads. Courtesy CutTheCorner.info.

Many who journey to the Outer Banks take Interstate 95 to  Rocky Mount, then U.S. 64 straight to the coast, with visions of sandy beaches and lighthouses on their minds. Those coming from the north drive 86 miles of highway, bypassing a shorter 59-mile path lined with historic towns, trails and parks.

“A lot of folks have the ability and the luxury of being able to slow down and enjoy life on the way, and make the trip part of the event, the adventure,” says Brian Roth, mayor of Plymouth and a member of the North Carolina Sea Grant advisory board. “Cut the Corner really plays to that very well because you’ve got several smaller communities that have a lot to offer.”

Tom Harrison, director of the Washington County Travel and Tourism Authority, has lived in the area for more than 40 years and is familiar with the many points of interest in the region. Cut the Corner is his brainchild.

A driving route along the Roanoke River, its purpose is to entice travelers to explore the road less traveled while also shaving 27 miles off the trip.

But according to Harrison, it’s about more than just saving miles. “Antiques, historic churches, Revolutionary and Civil War history. Maritime history, the paddle trail, fishing,” he notes. “Each could be one thread in the multi-strand cord of a Roanoke River Road.”

After the first commemorative journey of the CSS Albemarle replica down the Roanoke River, from Edward’s Ferry near Scotland Neck to Plymouth in 2010 — and some conversations with Brent Lubbock of Sylvan Heights Bird Park — the idea of “starting the vacation early” sprouted.

Later that year, Harrison created and distributed rack cards from Roanoke Rapids to Plymouth. The brochures highlighted attractions in several of the Roanoke River towns sitting along this alternate route to the coast, such as antique shopping at the Riverside Mill in Weldon or visiting the Fort Branch Civil War Site near Hamilton.

“Dollar for dollar, the money spent will have a greater impact in this region,” notes Jack Thigpen, Sea Grant extension director. “It will help the local economies while also providing travelers an opportunity to meet some people and visit places unique to northeastern North Carolina.”

Visit CutTheCorner.info for more information about these gems hidden in plain sight. Here are a few of the stops along this shorter path.

Along I-95, the town of Weldon has more to offer than national retail chains and restaurants near the highway. Known as the “Rockfish Capital of the World,” the town of about 1,600 is famous for outdoor adventures and history. 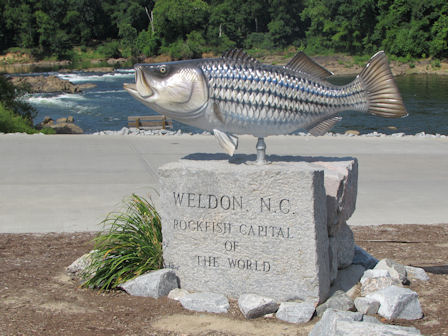 Weldon is a favorite place for anglers seeking striped bass, also known as rockfish or striper. Photo by Nichole Riddle.

Striped bass, also commonly referred to as rockfish or stripers, spend the majority of their time in salt water. But in the spring when it’s time to spawn, they migrate inland toward fresh water.

“In March and April, there is no better place to go for shad and stripers than Weldon,” says John Fear, Sea Grant deputy director. An avid angler, he has been fishing in Weldon for 20 years.

Parallel to the river, a 7.8-mile canal trail connects Weldon to Roanoke Rapids, passing under I-95. Six parking lots are spaced along the length of the trail, giving hikers a choice of how long a journey they wish to take. A museum for the Roanoke Canal, an aqueduct from the 1800s, several ponds and other points of interest line both sides of the trail. 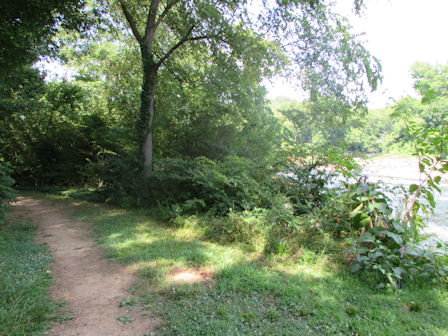 The Weldon end of the canal trail is at River Falls Park. Photo by Nichole Riddle

Weldon also was one of the first railroad hubs in the United States, serving as one end of the 161-mile Wilmington-Weldon Railroad — the longest in the world at the time of its completion in 1841.

Trains haven’t stopped regularly at Weldon Union Station since 1971, but the rail lines still are in use. CSX and Amtrak both pass by daily.

A museum for this historic rail line is in Wilmington, but visitors still can see the Union Station building, completed in 1912. The structure served as the first railroad hub in North Carolina, handling traffic from five different railroads. It now is the town library.

Pre-dating the Declaration of Independence by nearly three months, the Halifax Resolves are considered by many to be the colonies’ first official move to break away from English rule.

Visitors can attend scheduled walking tours of restored buildings from the late 1700s and early 1800s, or walk around at their own pace. These buildings are locked except when the guided tours are passing through.

Free tours start from the visitor center in Historic Halifax, one of 27 state historic sites in North Carolina. Visit www.nchistoricsites.org/halifax for more information.

Each summer, Eastern Stage, Inc. performs First for Freedom, the second longest-running outdoor drama in the state, at the 4-H Rural Life Center in Halifax. Find performance dates and ticket information at www.firstforfreedom.com.

Just outside the small town of Scotland Neck, in eastern Halifax County, is the largest collection of birds and waterfowl in North America. Sylvan Heights Bird Park, open since 2006, is an extension of the Sylvan Heights Avian Breeding Center, which has been at this location since 1989.

The two portions of the park serve the dual function of stabilizing bird populations and educating the public. Mike Lubbock, founder of the park, has won multiple World’s First and North American First Breeding Awards from the International Wild Waterfowl Association for his work to successfully breed birds in captivity. 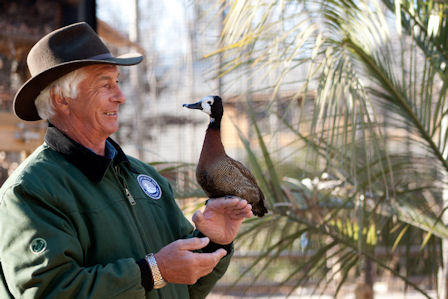 The public cannot access the breeding center, but the 18-acre bird park has about 2,000 individual birds, representing approximately 150 species. Visitors can walk at their own pace through the exhibits, or arrange in advance for a guided tour.

The park is divided by continent, with special exhibits such as finches or development projects manager for the park. “It can help inspire action to protect species on other continents.”

The Landing Zone is a key area of interaction. Two sets of doors prevent birds from escaping. Once inside, bags and sticks of food can be purchased and fed to parakeets, flamingos and other birds.

While much of the park is dedicated to species not found locally, two sections have been set aside as natural wetland areas. Some work has been done to remove invasive species, and nature has handled the rest. Now, beavers have returned to one of the areas and occasionally can be viewed from the small, coverable viewing slits of the Beaver Pond Blind building — a thoughtful way to view nature while minimizing intrusiveness.

The park also offers a variety of weekend and summer programs that encourage interactions with birds that are accustomed to being around people.

Visit shwpark.com for more information about the park and its birds. You may even catch a glimpse of baby birds hatching, thanks to the live incubator cam.

Nestled on the Roanoke River in western Washington County, Plymouth is where the journey returns to U.S. 64. Like its fellow river towns, history and outdoor adventures are nearby.

Plymouth has been in the news twice this year, as part of the Cycle North Carolina’s Coastal Ride in April and for the first annual N.C. Black Bear Festival in June. 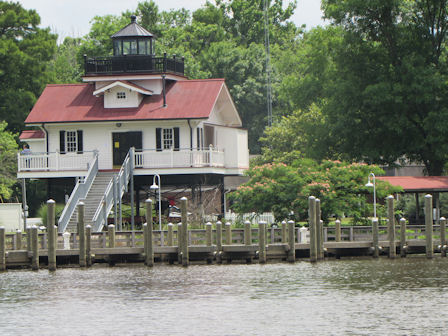 The Roanoke River lighthouse replica is based on the second of three lighthouses built in the 1800s. Photo by Nichole Riddle.

A short walk down Water Street is the replica of the CSS Albemarle and the Port o’ Plymouth Museum.

In 1863, construction on the Albemarle began in a cornfield near Scotland Neck. A Confederate ironclad ram, it drove the Union Navy out of the Roanoke River during the Civil War, clearing the path for Confederate forces to retake lost territory.

Its quick success prompted the Union to launch a mission to capture or sink the vessel. By October 1864, just six short months after it was commissioned, it rested on the bottom of the Roanoke after being torpedoed.

Every April, volunteers reenact the Battle of Plymouth, which resulted in the Confederate takeover of the town. The Albemarle sank one Union vessel and damaged another during the battle.

Artifacts from the battle can be viewed in the Port o’ Plymouth Museum, as well as exhibits about the ironclad. 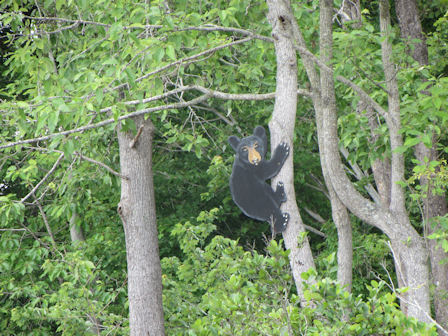 Black bears of all kinds were at the N.C. Black Bear Festival. Photo by Nichole Riddle.

During the N.C. Bear Festival, tours to nearby Pocosin Lakes National Wildlife Refuge — that spans several counties — allowed visitors to see wild black bears along a road referred to as Bear Alley.

“Trees come right up to the road,” Roth explains. On the other side of the road is private property largely used for agriculture. “The bears primarily live on the refuge, but they go out in the fields and forage for food, loaf, and go back and forth across that road.”

The region also is visited each winter by tundra swans from Alaska and snow geese from Canada. Visitors to the refuge can watch the birds from an observation deck on Pungo Lake, in the western part of the refuge that is open year-round.

“Down here at this end of the river, we have the greatest biodiversity of anywhere in North Carolina,” Roth notes. “It’s an amazing place.”

Go to www.fws.gov/refuge/Pocosin_Lakes for details about the wildlife and activities available at Pocosin Lakes National Wildlife Refuge.

The Roanoke River Partners is another organization promoting this relatively remote region. They offer a series of 16 camping platforms for the Roanoke River Paddle Trail, starting at Tusca Landing in Halifax and ending at Spruill Farm Landing on the Albemarle Sound.