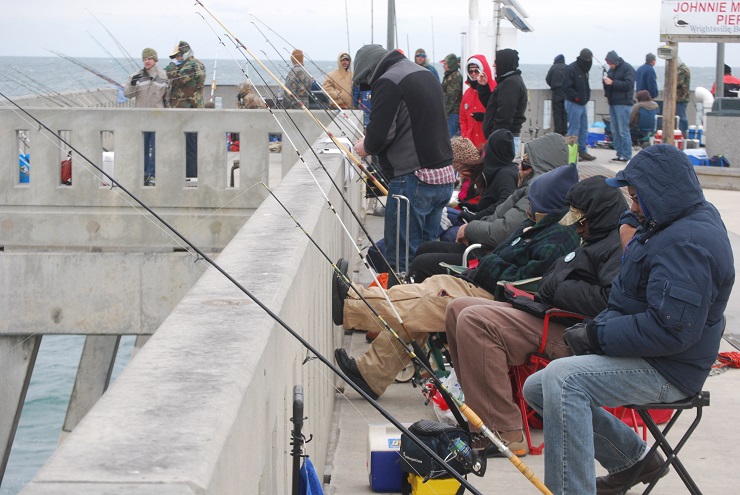 Chilled anglers brace against the winds during the 2014 Johnnie Mercer’s Pier Dogfish Tournament at Wrightsville Beach. Photo by Jack Horan.

What fishing tournament on the North Carolina coast targets an oddly named shark, gives the winner a bobblehead and frequently suffers through miserable weather? 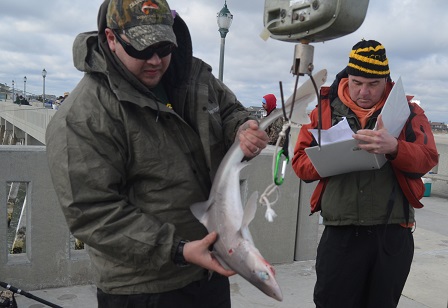 The 2015 tournament started at full speed. Dogfish tend to bite after dark. But many of the 117 anglers began catching the small coastal sharks in early afternoon, almost as soon as the first baited rigs hit the bottom. By 4:30 p.m., three-and-a-half hours after kickoff, they had weighed in 31 fish.

“This is as good as I’ve seen it,” said William Price of Benson, after pulling in his fourth fish.

The winner, Aaron Collier of Wilmington, took home a dogfish bobblehead and a $565 pot for his 10-pound, 9-ounce fish.

“It’s meant to be fun,” explains tournament organizer Al Baird, a Charlotte business executive. “Sometimes we don’t catch a fish. That’s part of it. They’re a bunch of people who are just looking to get out over the ocean. Catching fish sometimes seems to be secondary. I couldn’t do it if it was a serious tournament. We just keep it light and friendly.”

Now approaching its 11th year, the event has become known for its extremes. Take the 2011 tournament. A total of 136 anglers fished from the pier for seven hours and caught no fish.

A fluke? Nope. That was the fourth skunking in 10 years of the catch, weigh and release tournament.

The weather often is brutal. The tournament is held on the last Saturday in January, among the coldest times of the year. 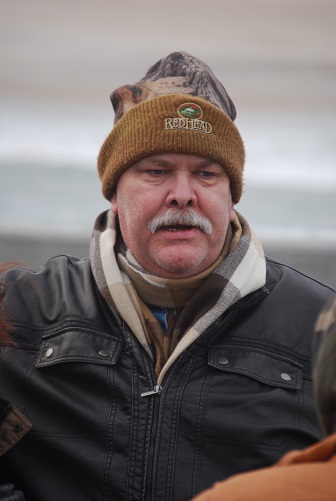 Rick Britt of Wilmington is one of the founders of the dogfish tournament at Wrightsville Beach. Photo Jack Horan.

Fellowship. Frequent skunkings. Forbearing anglers. Sleet. Wind. Cold. Absent fish. Fickle fish. Abundant fish. That sums up the dogfish tournament, without doubt the most laid-back of 45 or so annual saltwater tourneys listed by the N.C. Division of Marine Fisheries.

Tournament hours are 1 to 8 p.m. Anglers typically fish with surf rods, 10 to 13 feet long, with a two-hook bottom rig weighted with a 5- or 6-ounce pyramid sinker and baited with mullet, bluefish or squid.

Heaviest fish wins. First three places get cash and a bobblehead of a smiling shark in a dapper green jacket. Prime sponsor is the North Carolina Fishing Pier Society, of which Baird is founder. His 2011 book, North Carolina’s Ocean Fishing Piers/From Kitty Hawk to Sunset Beach, describes the history of the state’s piers.

Organizers schedule the tournament for the dead of winter as an antidote to cabin fever. “I just wanted to get friends together,” says Rick Britt of Wilmington, the initial tournament organizer. He founded the event with Arlen Ash. “Out here, everybody’s a friend.”

Britt said they picked dogfish, mostly by default, as it’s the only consistently available species in winter. They chose the fourth Saturday in January, during a lull between the NFL championship games and the Super Bowl.

For the first tournament in 2005, he recalled, maybe 25 people showed up. Attendance peaked at 166 anglers on a spring-like January day in 2012.

Owner Matt Johnson says dogfish help the year-round pier — named for a former local owner and not for songwriter Johnny Mercer who wrote “Moon River” — get through the winter doldrums. 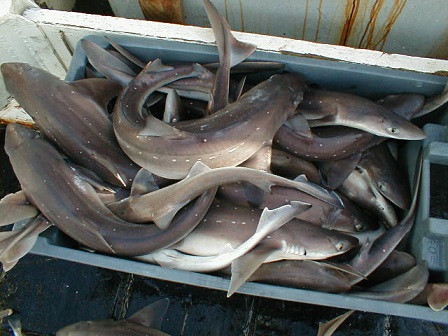 In Europe, spiny dogfish are the fish in fish and chips. Photo by Roger Rulifson.

Matthew McKinney of Charlotte likes the camaraderie. “You see old buddies, a lot of guys you fish with in the summertime,” says McKinney, who caught the winning fish in 2009. “A lot of us don’t live here and we all get to come back and hang out with each other for a weekend in the middle of winter. That’s probably the most fun. Midwinter reunion, you could call it that.”

Dogfish are gray-brown sharks. They got their name from fishermen who saw them chasing smaller fish in large, dog-like packs. They’re found in the Atlantic and Pacific oceans and average 3 to 4 feet long.

Two species, spiny dogfish (Squalus acanthias) and smooth dogfish (Mustelus canis), swim off North Carolina’s coast, according to DMF. The spiny dogfish has one spine in front of each of the two dorsal fins, while the smooth dogfish lacks dorsal spines. They migrate seasonally, moving south in winter, and returning north in spring.

Dogfish are considered a delicacy in Europe. They are the fish in fish and chips served in restaurants in England. In Germany, beer gardens offer smoked dogfish belly flaps called schillerlocken. Tournament regular Brian Cain of Cary describes the flesh of dogfish as a firm, white meat.

In 2014, North Carolina fishermen landed 6.1 million pounds of spiny and smooth dogfish worth $780,378, according to DMF. Baird said spiny dogfish make up about 80 percent of fish caught at this tournament.

WAITING FOR THE SHARKS

The near record-setting catch in 2015 contrasted with the near no-show tournament in 2014. 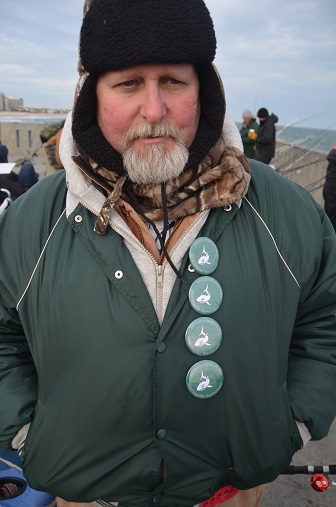 The four buttons worn by Frank Cobb of Gastonia signify the four rods he fished in the 2014 tournament Photo by Jack Horan.

That year, all the dogfish regulars were there, including 2013 champion Travis Horne of Wilmington, but the sharks stayed away.

“I’ve been here when there’s sleet, rain,” said Eric Kielmeyer, who has made the 500-plus mile trip from of Columbus, Ohio, for eight years. “It’s the fun of being out on the pier, the friends I’ve made.” He also comes to get away from the cold. The weather app on his smartphone showed near-zero readings back home. The pier was almost balmy compared to Ohio.

Others were in the hunt for their first dogfish in 2014. Frank Cobb of Gastonia wore four dogfish buttons on his jacket, each for a line in the water. “Haven’t caught my first one yet. I’m still learning, watching and learning.” Cobb had to wait until 2015 to catch his first.

As the cold afternoon wore on, clots of anglers braced against the harsh wind. Tournament organizer Baird sought to raise flagging spirits with some levity. “Right now, everybody’s tied for first place!” he called out, prompting ripples of laughter.

At 8 o’clock, Baird declared the 2014 tournament was over. David Lynn of Rockingham had pulled in the only fish, a 6-pound, 5-ounce spiny dogfish.

Baird concluded with sly humor for the 99 other competitors. “You guys are all tied for second,” he announced, conferring a moment of glory before adding the kicker, “…and last place!”

North Carolina Sea Grant has supported several dogfish research projects that have been covered in Coastwatch, including in Winter 2015, Summer 2010 and High Season 2007.

Starting in January 2016, North Carolina Sea Grant will work with farm-to-table restaurants to develop recipes for cape shark, another name for spiny dogfish.

Chefs at Cafe? Lachine in Nags Head, 18 Seaboard in Raleigh, and Rx Restaurant and Bar/Pembroke’s Restaurant in Wilmington will be part of this project.

Each restaurant will hold consumer evaluation panels to gather feedback on appetizers, salads and entrées featuring cape shark. The boneless fillets have lean white meat with a firm texture.

Restaurant owners believe that cape shark could be a viable local alternative to other seafood options. In addition, members of the North Carolina seafood industry are interested in developing processing capacity for the species if a market can be identified.

With this minigrant, Sea Grant seeks to determine if there is an appetite for cape shark in the state. If so, the team will identify an industry partner to begin processing and distributing the meat.

“We want to introduce consumers to this underappreciated species,” says Barry Nash, Sea Grant seafood technology and marketing specialist who is leading this project. “Our goal is diversification — of the seafood industry’s revenue streams, of the restaurants’ seafood options and of the consumers’ palates.”