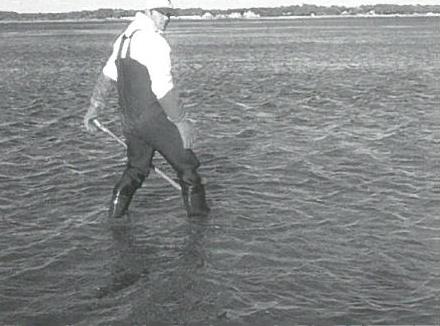 Eelgrass is a nitrogen junkie.

That’s no laughing matter, says Brant Touchette, since the ecologically important seagrass quite literally can eat itself to death in nutrient-enriched estuarine waters.

Findings from Touchette’s eelgrass research provide new insights into the metabolism of seagrasses — perhaps a key to solving the disappearing eelgrass mystery. 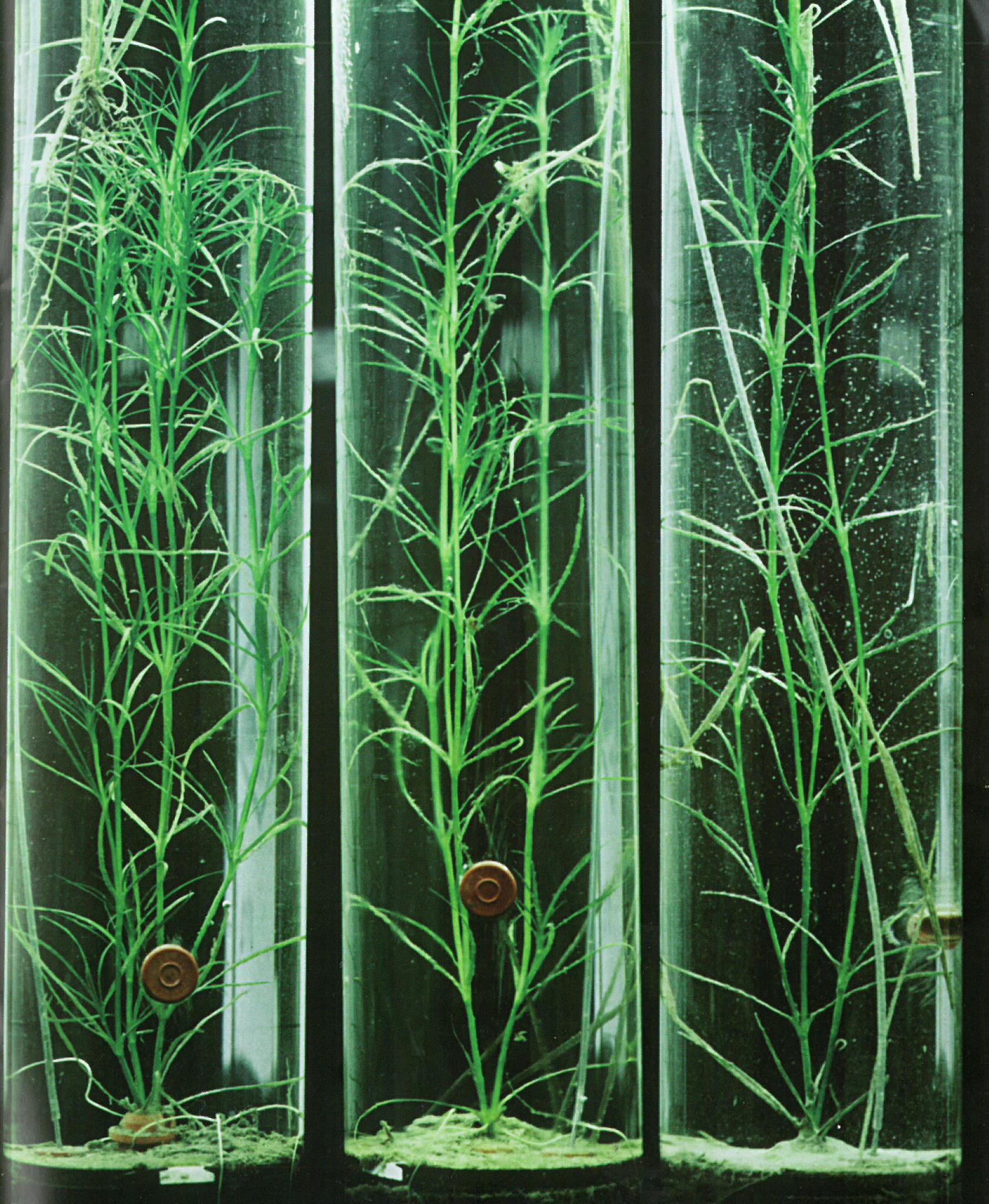 In recent decades, there has been a widespread decline in eelgrass.

“Where we see declines in eelgrass habitat, we usually see declines in commercially valuable finfish and shellfish populations,” explains Touchette, an assistant professor of biology at Elon University.

Touchette’s study shows that eelgrass leaves will take up nitrate at all costs.

“Seagrass is nitrogen limited, so it is geared to recognize nitrogen going through the water column,” Touchette explains.

“A little nitrogen is a good thing. But, eelgrass is a nitrate junkie. It will deplete its growth effort to go after nitrate.”

Unlike other plants that have control mechanisms, eelgrass has no turn-off switch. It therefore uses all its energy to go after nitrate from the water — energy that should go towards its growth, development and sugar production.

Eelgrass can’t stop taking up nitrate until it runs out of soluble carbohydrates.

In a controlled lab setting, Touchette could manipulate the amount of nitrogen in the water column to observe its affects on the eelgrass.

“It’s amazing to see what occurs with increased nitrate levels,” he says. “The leaves break off, the main growing area crumbles, and the plant begins to deteriorate. Its growth is stunted.”

Another surprise finding is that eelgrass takes up nitrate from the water column day and night. In laboratory experiments, Touchette found that the activity of the key enzyme in nitrate assimilation — nitrate reductase — was induced during dark periods, as long as nitrate was available in the water column.

Most other plants shut down at night, since the sun produces the energy needed for photosynthesis, he notes.

“Eelgrass doesn’t follow that model. Just why it has not evolved a mechanism to shut down at night is a question for another day,” he muses.

A widespread eelgrass die-off stunned scientists in the early 1930s. The so-called “Wasting Disease” decimated about 90 percent of all eelgrass in northern Atlantic waters. On the East Coast, the eelgrass growing range extends from the Arctic Circle to North Carolina.

Scientists have proposed many theories as to the cause — bacteria, fungus, and mold. But the literature records several previous eelgrass declines, and some suggest that periodic sunspots might be to blame. Others have correlated periods of above average precipitation with the decline, while still others have suggested the decline could be drought-related. 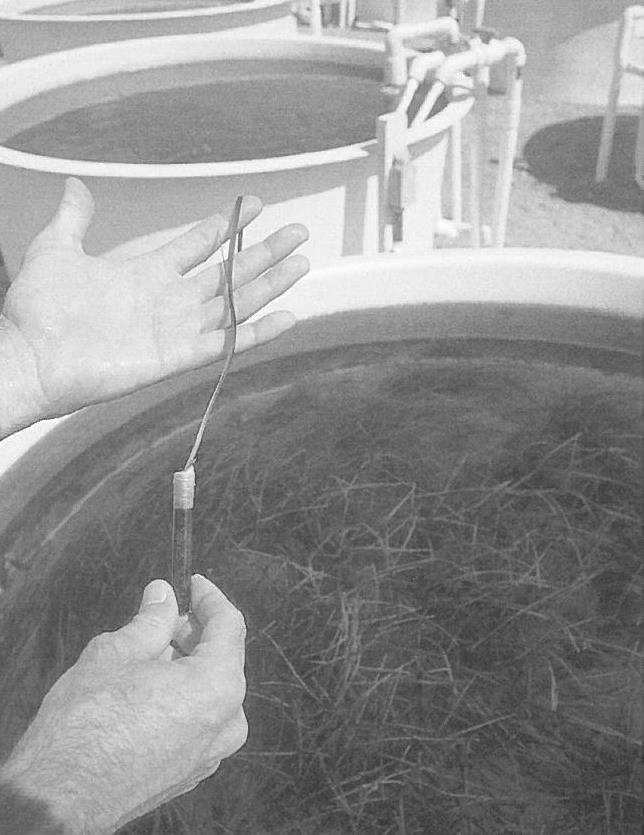 Another theory points to increased water temperatures as a contributing culprit — something that Touchette also considered in his recent research.

His lab experiments show that an increased temperature can reduce eelgrass shoot density by about 40 percent. Temperature also may decrease leaf and root development, and may alter internal carbon and nitrogen compositions.

But Touchette is not ready to draw any correlation between global warming and the current decline of eelgrass. “The jury is still out on that,” he says.

However, he is willing to stick his neck out and name names when it comes to contributing factors to nutrient loading and eelgrass loss.

“There is an obvious need to control point and nonpoint pollution. Better stormwater management is a big step, since historically storms mean high concentrations of nitrogen in runoff,” Touchette says. Also, sediments, which begin as ammonia compounds, may oxidize into nitrate in the water column.

She says that Touchette’s findings are important in helping scientists, coastal managers and concerned citizens understand that eelgrass, a valuable seagrass on the U.S. Atlantic coast, is extremely sensitive to nitrate pollution.

“From bypasses of raw sewage into coastal waters during moderate rainstorms, to poorly treated animal wastes that spill into waterways, to urban runoff from our sprawling and densely populated coastal cities, water pollution control should be a much higher priority,” Burkholder says.

“Some may say it’s impossible to eliminate all sources of pollution,” Touchette observes. “It’s true that pollution is not easily managed. But one of the many consequences of not trying to do more could be the disappearance of eelgrass beds, along with many of the economically important fisheries they host.”

Eelgrass evolved long ago before modern levels of pollution existed, explains Burkholder. Eelgrass forms underwater meadows where young fish can hide from predators and find a wealth of food to eat.

“The enormous surface area provided by these plants also acts as a highly efficient biological filter that removes harmful pollutants from the water, helping to protect fish health. Whether we live along the coast or inland, we all depend on eelgrass meadows to produce many of the marine fish that we use for food,” says Burkholder.

There’s a growing body of data to show the importance of eelgrass and other submerged aquatic vegetation in the lifecycle of commercial and recreational fish, says Carrie Selberg, a habitat specialist with the Atlantic States Marine Fisheries Commission in Washington, D.C.

“Essential fish habitat is more than a buzz phrase,” she says. “Many fish spend part of their lives in seagrass habitat. For some it’s a place of refuge where they can find cover from prey. Others dine on the organisms trapped on waves of grass. Some species spawn in the quiet waters.” 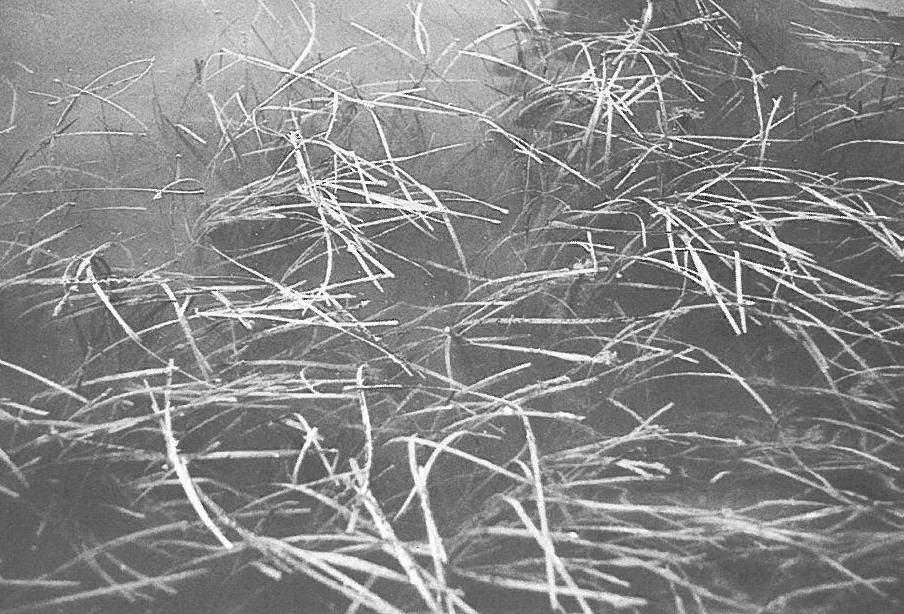 Eelgrass meadows play an important role in the estuarine habitat, providing food, cover and spawning grounds from many important finfish and shellfish.

Selberg, who earned her master’s degree in 1999 from Duke University’s Nicholas School of the Environment in Beaufort, is quite familiar with the area waters. Some North Carolina species rely on eelgrass habitat for part of their lives, she says.

“North Carolina is looking at how all submerged aquatic vegetation figure in coastal habitat protection plans (CHPPs) being developed by the N.C. Department of Environment and Natural Resources (DENR),” says Selberg.

North Carolina is taking a unique approach with these plans, and other states are interested in seeing how the process works, she says. Results from studies, such as Touchette’s, could shed an important light on seagrass systems — what they contribute to the overall fish habitat, and how they are impacted by human activities, Selberg points out.

Mike Street, chief of the habitat protection section for the N.C. Division of Marine Fisheries, is coordinating the CHPP effort.

He says submerged aquatic vegetation, such as eelgrass, are important for food, cover, spawning and migration corridors. Known in scientific shorthand as SAVs, they are one of the six habitat types that are being considered as DENR develops protection plans. Other habitat types are the water column, shell bottoms, wetlands, ocean hard bottoms, and soft estuarine and riverine bottoms.

“We want to show the links between each habitat, habitat function and the lifecycle of fish,” Street says. “It’s a huge task. But it is extremely important to develop habitat protection plans that can be used as management tools.”

Reliable scientific data to support each area is vital, he says.

Mark Fonseca, research ecologist at the NOAA Beaufort Lab, agrees with other colleagues who consider seagrasses “the canaries in the estuaries.”

“If the seagrasses are in good shape, it’s a pretty good sign that the water quality is in good shape,” Fonseca points out. “In North Carolina, they seem to be in relatively good shape, except in localized trouble spots with high population and land runoff problems.”

This is the only place Fonseca knows of where these subtropical and temperate species overlap growing seasons.

He has studied and published on a variety of seagrass-related topics, ranging from faunal utilization to economics and hydrodynamics.

Like Touchette, he is fascinated with the physiology of seagrasses. “Here they are, downstream of everything — their roots fixed in a bottom of sediments that have sulfides that are naturally toxic to rooted plants. Yet, they somehow manage to produce,” Fonseca says.

Touchette agrees that, when it comes to submerged aquatic vegetation, there is cause for wonder — and a need for additional studies.

“Seagrasses have evolved to tolerate harsh environmental conditions. And, while there is a wealth of literature about terrestrial plants, comparatively little is known about seagrasses,” Touchette observes.

The necessary adaptations for survival and growth probably have altered many physiological processes in these plants. He would like to have a hand in finding the scientific explanations for remaining eelgrass mysteries, including photosynthesis and carbon metabolism; the role of carbohydrates; and the role of carbon storage.

“I would like to culture seagrass in the lab and look at how the genes involved in nitrogen uptake are regulated,” he says. “Under lab conditions, you might begin to get a handle on the nitrogen carbon interrelations and perhaps determine if what you are seeing is genetic- or energy-related.”

Touchette loves research and loves teaching. To him, they are interrelated: His students’ curiosity inspires research, and his research results find their way into his teaching.

For information, email Touchette at btouchette@elon.edu. To read his journal articles, go online to the Center for Applied Aquatic Ecology homepage at http://www.ncsu.edu/wq/ and click on publications.

This article was published in the Holiday 2002 issue of Coastwatch.