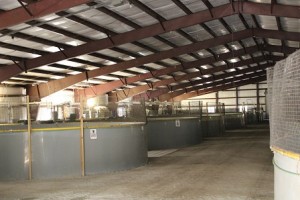 Historically, sturgeon was considered among the finest seafood available along the East Coast of the United States, prized for its firm texture and delicate flavor.

However, the population of domestic sturgeon collapsed in the early 20th century and has never recovered. The Atlantic and shortnose sturgeon, which are indigenous to North Carolina, remain on the endangered species list.

Today, sturgeon are cultured for their roe, better known as caviar, which can fetch high prices.

Atlantic focuses on the wholesale market, selling its caviar and sturgeon meat to stores and restaurants in New York City and other locations. Marshallberg expects to begin doing so in the next few years. 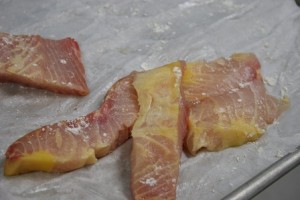 Sturgeon meat is a protein that is low in calories and saturated fat, and high in healthful omega-3 fatty acids. Photo credit: E-Ching Lee

Originally the farms focused solely on the production of caviar, a luxury product with worldwide demand. However, Atlantic now has high-quality sturgeon meat available for sale. It is a source of nutritious, flavorful protein.

A market for fresh sturgeon has not existed in the U.S. for more than 100 years. As a result, most American consumers are unfamiliar with sturgeon meat. It is similar to grouper and swordfish — both of which are popular and in short supply.

In 2013, North Carolina Sea Grant collaborated with Tim Coyne, executive chef at Bistro By The Sea in Morehead City, and John Burke, a retired fisheries biologist and Marshallberg’s operations manager at the time, to develop a variety of culinary preparations using cultured sturgeon as the prime ingredient. This work was funded by the N.C. Fishery Resource Grant Program.

In a series of three tastings, a selection of the restaurant’s customers were invited to decide on the cooking methods and flavor profiles they preferred most. At each event, participants sampled an appetizer, a salad and an entrée.

Each dish was evaluated on a scale of 1 to 7 — from unacceptable to excellent. Tasters consistently rated the offerings in the good to excellent range. Scores also indicated that baked and grilled methods were preferred over steamed preparation. In addition, participants were partial to sturgeon meat paired with relatively strong flavors, such as a teriyaki glaze or blackened.

On page 21 are three recipes that were used during the tests for this project. Try them for yourself. See the Ordering Sturgeon box on page 25 for tips on getting fresh sturgeon meat.